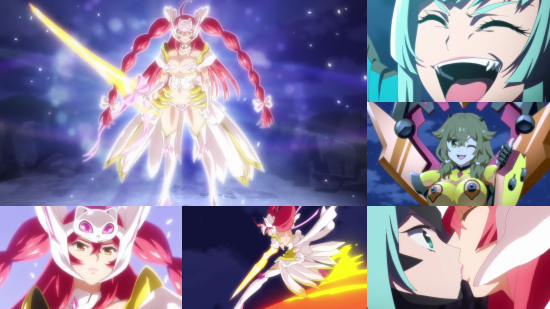 I have an admission to make. When I marathoned Episodes 1 to 5 of Valkyrie Drive, and wrote my last piece about this series, I was, just a little bit tiddly. Ok, a slight lie, I was more than a bit tiddly, and thanks to the combination of lots of anime tiddies and gin I was given the joy of a grin on my face for the best part of two whole days.

Watching Valkyrie Drive has been an interesting experience. Watching it in a public place, even more so and thanks to a new privacy film for my mobile, also quite possible even in the gym! The question is, did the series have the drive necessary to keep the show exciting and fun without the use of copious quantities of giant bouncy animated tats and the swapping of fluids by very pretty women?

I am ashamed to say that, contrary to my initial views, Valkyrie Drive matured nicely and delivered what I didn’t think was honestly possible after seeing a giant pair of knockers used as a water slide, a plot. An actual plot, and more than that, a story that actually seems to spread beyond Mermaid Island.

First, it becomes very obvious that although there are “baddies” on Mermaid Island, they are merely local thugs trying to preserve their elevated way of life, namely Charlotte and her Nobility, and their loyalty only goes as far as is required to keep the tasty treats and tats coming. When the bigger fish eventually arrive from outside of the island, a group of three enhanced arm users, Soldiers, to take over festivities and the management of the island as they try to find the one who can unleash the full “Valkyrie effect”.

Yes, that is as stupid as it sounds, and yes, because this is anime, the one who they detected is our own reluctant exter, Mamori. Her over-excitable nature during her fights with Mirei allowed the external observers of the island to detect her and focus their interest on this girl with extraordinary level of power and although the likes of Nimi and her growth problems caused many a tingle on the scouters, these were nothing to the spikes occurred when Mamori climaxed over and over again. Although, it was quite obvious from the start that Mamori would be just a little bit special.

This little reveal wasn’t the biggest surprise, not by a long shot, probably the greatest, and most obvious twist was with the governess. What a surprise, Akira, wasn’t a bloke after all, and was in fact a highly busty lass (if not the second most busty after Lady) who managed to keep her disguise only thanks to the almost heroic efforts of her sports bra. I have never seen anyone more relieved to take off a bra. How the hell she managed to breathe, I have no idea. But even this “twist” wasn’t what caused all the fuss. With the soliders came a particularly nasty and psychopathic Hatsune Miku lookalike called Momoka Sagura. Her little obsession lies with not only dethroning the governess, destroying all society, and generally being quite nasty to Mirei, no, what she wants is to push her armed virus abilities to the ultimate form.

And what do you need to do to gain the ultimate form? Well that’s easy, you need to make the little redhead Mamori orgasm and take control of her abilities. Simple, right? Well, not so as Momoka finds out. As much as she abuses, enslaves and controls Mamori, she just cannot get her off enough to actually achieve the ultimate level, the Valkyrie Drive. So, what does she do instead? She, takes on the powers of her other solider friends, and transform into a giant mecha that uses tentacular powers to absorb those infected by the armed virus and liberate them of their affliction. Apparently, Mamori’s actual ability is to absorb the armed virus. Go figure?

Cue a sacrificial moment with Mirei being sucked into Mamoka, abused by tentacles, and then breaking free to find an abused and enslaved Mamori trapped within. When they meet, two become one and the Valkyrie Drive level is achieved, and they unite the great remaining powers of Mermaid to destroy Momoka using the power of giantess body slam, money obsessed armour, high-heels of doom and a firey phoenix motorcycle.

This ending fight is almost as awesome as a Jaeger slamming a Kaiju with a boat in Pacific Rim, at least it put a gin-laced grin on my face interspersed with lewd laughing as it reached its eventual climax.

What was probably most surprising about Valkyrie Drive: Mermaid was the fact that any of this happened at all. Given that most of the series to date was formed of an equal measure of lewd sharing of bodily fluids, sexual groping and character development. As the second half approached and the secrets of Mermaid laid bare, the show exploded as the plot emerged and everything was turned on its head. This is what we were all waiting for, and all of a sudden, the fan service dropped and actual plot took over, well, kind of. There are still a lot more questions to be answered, mostly involving the other islands that are mentioned, with some cameo roles by characters from the newly-released game, but these are incidental.

The ending is actually quite sweet in its own way, and in a slightly deranged way I was reminded of the ending of Madoka Magica as Mirei and Mamori decided to move on, and use their newly acquired love for each other, and their blossoming Valkyrie Drive to cure those around the world of the virus.

As with my review, the series continued to be plagued by an over-abundance of censorship which continues to ruin everything. But thankfully, what does escape this horrendous white washing is the quite ludicrously cute ending, which after the sixth viewing, had wormed its way into my ear so furiously, that I was humming it in the loo at work, and is now on its way to me to permanently infest my shelves. The video is so saccharine that it actually makes me like Mamori, and simultaneously wish that she might have been more effective in the series if she was a little catgirl.

In the end, I have to admit that Valkyrie Drive has turned into a series that I would absolutely categorise as a guilty pleasure. I absolutely loved it. It ticked a lot of boxed for me, most of them lewd in some way and it is not a masterpiece by any sense. It is entertainment. It is trash. It embodies all that is wrong with anime today prioritising cute two-dimensional characters, jiggle physics, fan service and potential merchandising over actual substance and story, but you know what, sod it. I love the show, virus-sucking tentacles and all.

7
The plot is still a bit thin, but that ending made up for it!