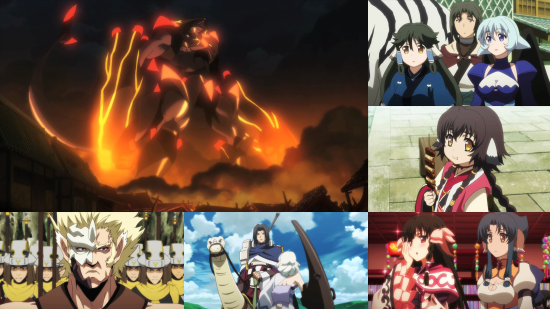 I have found myself genuinely torn by Utawarerumono: The False Faces. It is a series which, as a sequel and based on a very story-rich visual novel/eroge has an unusually stong source with which to base an anime from. Like its predecessor Utawareumono, this series has been two seasons in length, giving ample opportunity to mix up both the fluffy tails and ears of the well fleshed-out characters and the at times dark and violent story, but for some reason it just hasn’t work as well as it should have.

Let go back a bit. Utawarerumono, the first anime and game, is one of my favourite anime series and consistently appears in my top twenty as it gets many things right. The characters are cute, lovable, yet strong and independent and they don’t stick to the normal anime stereotypes (except for Hakuro who has moments of being about as strong as a teabag). The universe within which the series is set is very busy with well-developed mythology as well as a hellishly powerful back story as to how the world ended thanks to human arrogance and the new humanity, where animal features took over. Utawareumono always paced itself well, balancing the action - which was bloody, fierce and thrilling - with the lighter scenes of Hakuro building his... harem of sorts... of pretty girls. In my mind, this balance makes the series almost perfect.

Utawarerumono: The False Faces follows an almost identical formula, but because of the evolution of anime and how production has moved on - in some ways for the better, in some ways for the worse - the balance has been lost. In my initial review, this was not an issue. Haku was just settling into the life in Yamato and the universe was being built upon. But the wait for any action or thrills became longer and longer, and it came to the point where beyond the halfway point of the series nothing of actual consequence had happened. There had been a couple of minor skirmishes but the actual meat of the story, which involves the outbreak of civil war, Yamato warring against its enemies (including against Tsukuru which was the country of focus in the first series) and the destruction of the peace takes an absolute age to get to. One of the good parts of the first series was how it didn’t mince the horror of war. Horrific events including rape, pillaging and genocide happened, and to some level much of this horror is retained in this second series, but in a watered down form and sandwiched between bath scenes, girly visits to a smut shop and discussions about food and the fluffiness of Kuon’s tail when she is embarrassed.

While I can appreciate how a bit of balance is required, expecially when Haku witnesses the sheer power of the masks in the genocidal attacks by Yamato on a neighbouring country being used as an “example”, the way the writers countered these scenes weren’t entirely necessary. I think that it would have been much better to have kept Haku traumatised and depressed as this scene forms the basis for all of his future decisions. The gravitas was completely lost by the next episode’s party episode where naked male hijinks are used to lift his mood.

However, what the series does do right is the progression of the story once it begins. War is horrible but so is internal strife, and when the emperor dies and then the crown princess Anju is poisioned, the fall into chaotic civil warfare is quick, brutal, and excellently delivered to the point where, in the final scenes of the series, I couldn’t help but cry when Kuon turns her back, and the series comes to a close.

Utawarerumono: The False Faces has been used as a kind of refresher to the anime community to remind us all that the franchise exists. After all, the first series was not graced with merchandise or much fanfare, but so far it looks like the second series will get that kind of treatment. But what is probably the best news is that a third game is now in development to finish the story and the second series of the anime has been used to set this launch up, of sorts. I am a bit miffed that I don’t get to see the true ending, but at the same time I am happy to see that the series is going to continue, which will likely mean more animal-eared wonders in the future.

I have continues to be impressed with the animation of the series, and one benefit that the evolution of the industry has given us is that the animation for the girls, the environment and even the movements of their features is significantly improved compared to the animation used to make Eruru cute in the first series.

The production quality rarely dropped throughout the series and the music and audio has maintained the same quality as well. It might be that, like with the first Utawarerumono, my opinion will change with a second viewing, but for now my opinion is fixed.

Utawarerumono: The False Faces is a notable successor, but even though it has brought many improvements to the franchise thanks to the progression of time and techniques, it is still not as worthy as its predecessor. As much as I love Kuon, she is still no Karurua and first season will likely always be my favourite.

You can currently watch Utawarerumono: The False Faces in streaming form on Crunchyroll.

7
A divisive series that unfortunately doesn't match the quality of the original.
COMMENT AND DISCUSS
blog comments powered by Disqus