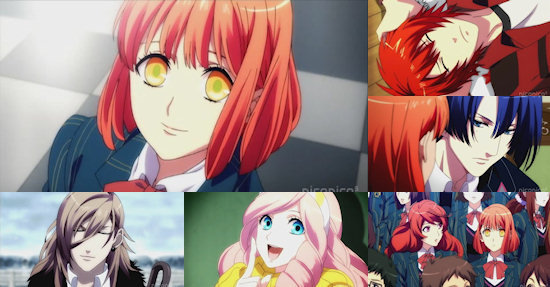 As Uta no Prince-sama's first episode opens, we're greeted by a bevy of good-looking male pop idols, performing against a colourful backdrop of pyrotechnics and screaming fans - if there was any doubt in your mind that here is a series targeted at a female audience, such doubts will surely be quickly dispelled.  This is, after all, an anime adaptation of a so-called "otome" game.

With those credentials established, A-1 Pictures effort quickly introduces her to our protagonist, a girl named Haruka Nanami.  We immediately find Haruka in a time of need - late to her entrance exam at the illustrious Saotome Academy, she finds her access to the exam barred by over-zealous security guards.  Enter a pair of knights in shining armour, who seem to convince the guards to let her pass and take the exam; little do they know that it is in fact the hidden hand of a far more important individual working in the shadows.

Fast forward six months or so, and Haruka finds herself safely ensconced within the confines of the academy as she pursues her dream of becoming a composer in this establishment geared solely towards training idols and those working alongside them on the road to (hopefully) success.  Unsurprisingly, Haruka seems to attract the attention of good-looking wannabes at every turn, with these early episodes geared towards putting Haruka into more personable surroundings with at least a couple of them.

Our protagonist seems to be somewhat oblivious to all of this male attention however, as her focus lingers on both her own problems (not being able to read music being the entirely unbelievable core of one early episode) and the star she idolises - Hayato, whose twin brother Tokiya Ichinose just so happens to be a part of Saotome Academy himself, even if his outlook on life seems to be entirely different from that of his sibling.

To be frank, the biggest issue with these initial episodes of Uta no Prince-sama is these occasionally nonsensical points of plot development - while Hayato's twin brother appearing at Saotome Academy and his being a miserable git are just about palatable, Haruka qualified to enter a prestigious school to become a composer without being able to read music?  Really?!  Perhaps its the kind of thing I shouldn't be picking nits about as it's all in the name of bringing Haruka into contact with the various dishy males around her, but it does grate a little even for a series featuring a headmaster who arrives at the school year's opening ceremony suspended from wires... outdoors.  Let us not try to conceive of where these wires were suspended from in the open air.

Away from the less than stellar script-writing of the show so far, I have to confess that Uta no Prince-sama is an otherwise polished affair - visually, the series is colourful, striking and well designed, and each episode has just the right amount of humour to offset any of the angst and anxiety emanating from Haruka and some of our male cast.  All of its characters are likable (or suitably haughty and unlikeable) enough to work as part of the show's overall dynamic, and it seems as if everyone will get a fair bash at cosying up to Haruka by the end of the series.

Thanks to its relative visual verve and a stellar voice acting cast, it's hard to imagine Uta no Prince-sama being anything but successful amongst its target demographic - it isn't ground-breaking and its plot is incredibly flimsy in places, but as long as you can find a guy to root for or like Haruka's character enough to wish her luck with her future as it unfolds before us, then its a comfortable, undemanding piece of entertainment.

As a final word, we really should comment on the quality of our viewing experience using NicoNico's recently launched western language portal given its the first series we've watched in this fashion.  Overall, our feelings on NicoNico as a streaming video portal for anime is a mixed bag - streaming speed is variable at best (although you can at least buffer an entire episode if you wish), and the site's distinctive scrolling comments are only an irritation to be disabled as soon as playback starts.  More positively, subtitles are legible, understandable and error-free, and video quality in Uta no Prince-sama's case isn't too bad at all considering that it's only a low-resolution stream (with a premium, subscription service likely to follow in the future); it's certainly better and more watchable than another service we could mention - FUNimation Entertainment, we're looking at you.  Only having episodes available for a week if you aren't a registered member might only suit the hardcore fans looking to keep up with a series alongside its Japanese broadcast (although registration on the site is hardly a painful process), but we'll certainly be keeping a curious eye on NicoNico as the year progresses.

You can currently watch Uta no Prince-Sama in streaming form on NicoNico.

6
Sparkling production helps it along and its appeal to its target market is clear, but that doesn't really excuse some lamentable moments of script writing and plot progression.
COMMENT AND DISCUSS
blog comments powered by Disqus