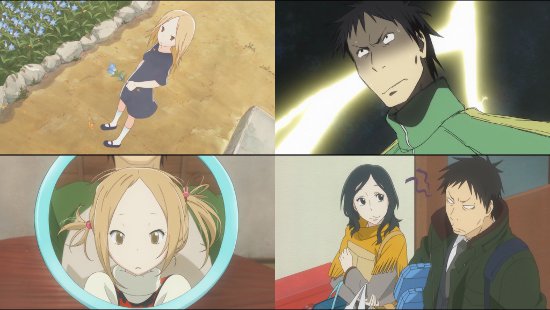 Usagi Drop (sometimes translated as Bunny Drop, but not for this release) is a property I have mixed past feelings on. I was originally a massive devotee of the manga, firmly in the camp of “single dad manga is the best manga!” between this and Yotsuba. Then, around the same time the anime started to air, came the end of the manga with what is agreed upon as a very controversial ending. I disliked this ending to such a degree that it put me off the series as a whole, and I skipped the anime while it was streaming. Now that time has allowed my frustration to scar over, I am back to take a look at this adaptation of the series I once loved. Can it stand on its own, or does it step on the same land mines as the source material?

Usagi Drop centres on thirty-year old salaryman Daikichi, a boring but contented man, who gets called back home to attend his grandfather's funeral. Once there, he and the rest of the family find an unexpected surprise - gramps had secretly fathered a daughter in his twilight years. Five year-old Rin is understandably withdrawn by her father's passing and there is no sign of a mother, making her stick out like a sore thumb. When the family convenes to discuss what is to happen to Rin, people take turns washing their hands of her. Frustrated by their callous reaction, Daikichi stands up and declares that he will take charge of the small girl who is (according to the family tree) actually his aunt. Daunted and most certainly in over his head, Daikichi steps up to the plate to come to terms with his newfound guardianship of Rin, something that will mean a lot of adjustment for the both of them.

To get this out of the way quickly: this series does not contain any hint of the controversial back half or ending of the original manga, so anyone afraid of that (including myself) can breathe a sigh of relief. In fact, from a quick cross-reference the source material has been liberally tidied up and re-arranged for this adaptation - nothing has been unduly changed, but it has been streamlined and strengthened, allowing the charm of the original material to be brought forth within the confines of this eleven episode run.

The thing that I appreciated the most about this adaption was its strong episodic structure - conflicts and obstacles raised in an episode are explored and resolved (at least for the time being) in that episode. This way the series maintains a strong feeling of forward momentum and progression, focussing on one issue at a time and keeping you from being weighed down. This is not to say that there are no on-going throughlines, but these are clear to see and are kept from being bogged down with extraneous added plot threads, allowing episode of the show confidently stands alone and making it something you can comfortably dip in an out of if you prefer watching in that manner. This release also comes with a set of four bonus episodes which weigh in at around four minutes long and hold some smaller, stand-alone stories which are also good for doing just this.

It also helps that the material it is presenting is engrossing and well-handled. Boiled down, the conflicts the show presents - finding Rin a nursery school place, dealing with the pressures of work wanting Daikichi to work overtime, trying to track down Rin’s birth mother - are mundane but the way the show builds up the emotional stakes, explores the knock-on effects for the cast members, how Daikichi feels as he tries to fathom the enormity of what he has taken on and how Rin feels about all this, quickly drags you in. This is not a case of “making a mountain out of a molehill” but instead making you empathise that, to these characters, these issues are scary mountains, with mountain goats and snow and all. The emotions, and in particular the uncertainty, really resonates through the presentation and while I never came to tears while watching (there is nothing that shocking or huge enough to elicit such a reaction), it did leave me feeling emotionally tender afterwards.

Presentationally, Usagi Drop is amazing, and it is a sumptuous treat both for the eyes and ears. The most striking element of these are in the pre-title sequences, which are animated in a watercolour format where the colour is re-painted in each frame of motion, giving everything a wonderful fluid look. These scenes are wonderful mood-setters for the upcoming episode, and make a great first impression. The bulk of the episodes are animated in a standard fashion, although this does not mean they are in any way a slouch. The level of care for both the characters and the backdrops is impressive, and really helps to drag you into the show. I found myself impressed by the sheer consideration on display - the scrapes and burrs on an abused backpack, the motion and exertion shown in a sleepy yawn, the tiny shifts in a loose baby tooth. Again, I want to impress how sumptuous the backdrops are, which bring life and immediacy to some very mundane locations - a school reception, a suburb street, a supermarket produce aisle. Importantly the effort is not only expended in brute detail, but also in motion and expression, particularly for the characters as even when they are presented in a deformed format they are still fully expressive and a full contributor to the scene.

The audio also plays its it part to draw you in - primarily made up of strings and piano, the soundtrack has a way of sneaking into a scene already playing out to enhance it, adding an extra edge of atmosphere and weight to proceedings to really drive them home. There are a few instances where they get a bit carried away and overpower the animation, which admittedly broke the spell somewhat and pushed me out of my normal entranced state, but these are thankfully few and far between.

Even the subtitles look good - they come in a non-standard font which look crisp and pop well on the screen, even from a long distance from my not-very-large TV. This is a definite improvement on some other releases I have seen of late. Also of note is that the chapter markers work as expected - important to note given the frequency with with these have been deficient on certain UK discs recently!

I really enjoyed watching Usagi Drop and I honestly feel that it surpasses the manga. What is presented has been lovingly polished to a near-perfect shine, taking the best parts of the manga and intelligently organising it in a way to make the very most of it. It looks wonderful, sounds wonderful, and has a release that does it justice. Unless your heart is one of granite, you would be well served by watching this series. Just don’t go reading the manga afterwards for the continuation.

9
A sumptuous and heartfelt treat in every fashion.
COMMENT AND DISCUSS
blog comments powered by Disqus