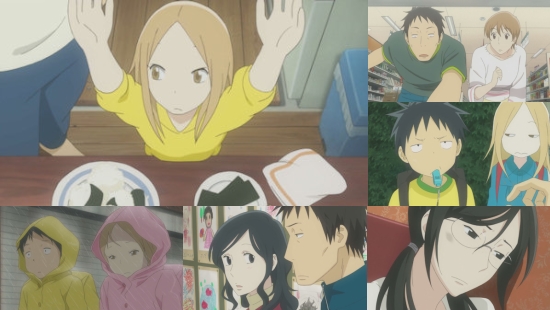 You'd need a heart of stone not to be at least a little touched or moved by the first few episodes of Usagi Drop as they introduced us to Rin Kaga, an illegitimate and now parentless child who finds herself shunned by those around her as an embarrassment to the family - a state of affairs which leaves her with an unlikely guardian in the form of single, thirty-something Daikichi Kawachi.

After using its early episodes to set up this premise and give us a feel for the tone of the series, Usagi Drop carries down its merry path in an accomplished yet effortless fashion, blending the everyday with the slightly more dramatic in a hugely enjoyable way and occasionally managing to blur the first with the second impressively.  Somehow, a common cold and a loose tooth manage to carry almost as much weight and entertainment value as Daikichi's investigation into the identity of Rin's mother, who herself turns out to be a fascinating (if not entirely likeable) individual that adds another dimension to the series despite her decidedly infrequent appearances.  You could perhaps argue that this makes some of the attempts at injecting drama into the show overblown, but I would imagine most new parents would argue that your child catching his or her first illness is the stuff of heart-stopping drama in their view.

While it's Rin and Daikichi's dynamic which powers the early part of the series, as the show progresses we find more characters capable of adding their own dimension to proceedings, most notably in the form of Rin's new-found friend Kouki (as typical a young lad as you could hope to meet) and his single mother Yukari (who serves as a potential love interest for Daikichi).  If Rin steals the show in terms of humour early on, it's often Kouki and Rin as a double-act which power later episodes, although arguably both are eclipsed in some ways by Daikichi himself as he muses upon the changes to his life and circumstances and marvels at other parents while never quite grasping what an impressive job he's doing himself.

It's genuinely quite hard to get across how well Usagi Drop handles its subject matter by way of a written review - it's the kind of series that you "feel" rather than think about, and it's certainly more of an emotional than thought-provoking journey even if you'll occasionally find yourself pondering the wider implications of being a single parent in Japanese society in particular.  Although its eleven episodes don't even attempt to bring the story to a close in line with the manga from which it is adapted (leaving room for a second season, no doubt), its ending is still broadly satisfying - this isn't the kind of show which particularly needs "closure" to feel like a worthwhile viewing experience.

Overall then, Usagi Drop isn't a series to thrill you in terms of either content or animation quality - instead it's a quiet and confident take on a sweet and really quite beautiful story that knows when to play its situation for laughs and when to tug at the heart-strings.  Given the popularity of its source material we had high hopes for Usagi Drop - the fact that it has met those expectations head-on and perhaps even exceeded them serves as high, and utterly justified, praise indeed.

You can currently watch Usagi Drop in streaming form via Anime on Demand.

9
An understated yet beautiful mix of drama and comedy makes for a bright, breezy yet touching viewing experience which never ceases to be enjoyable.
COMMENT AND DISCUSS
blog comments powered by Disqus