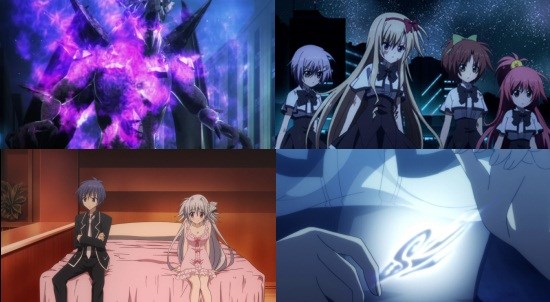 It’s time for a look at one of this season’s many light novel adaptations, though just to clarify for those who may be looking for something else – this is not a series to be confused with Fafner Exodus, the sci-fi series about fighting giant CG monsters. This is Unlimited Fafnir, a series about fighting giant CG monsters. Come to think of it, it’s not hard to imagine why you may have been confused.....

Here in Unlimited Fafnir it’s an old old old old old story. Boy (Yu Mononobe) transfers to a school for girls with superpowers as he's the only male in all the world to have those powers because he’s the protagonist, which is also the reason he has to have a secret past that also means he’s the most powerful out of all of them and the reason why all the girls (including his sister) will fall in love with him over the course of the series despite him consistently walking in on them in various states of undress.

Oh, and because every series has to have a dark twist in a post-Madoka world there’s also a dark twist which sees giant monsters called dragons (though most of them don’t resemble or act like any kind of dragon you’re familiar with) attacking the world, and every so often one of them decides they’d like to mate with one of our super-powered heroines. Unfortunately (besides some issues with size and species) any contact between a dragon and its chosen hook-up will mean the poor girl is transformed into a dragon herself, thus totally ruining her chances of getting off with Yu (thought let’s face it it’s not like that was going to happen anyway – I’ve started to realise that Sheldon and Amy from the Big Bang Theory are the perfect live-action version of most harem show protagonists i.e. she’s up for anything and he can’t take yes for an answer).

If my description of the plot sounds somewhat tired and cynical: well, that’s because Unlimited Fafnir is frankly one of the dullest and most uninspired series I've seen in a long while. Every episode sees director Keizo Kusakawa trot out every cliché you can think of past the camera before moving onto the next one (it seems clear that Kusakawa is putting all his efforts into KanColle which he’s also directing this season). It’s unoriginal and boring, and this becomes especially apparent when you realise that two other shows this season – World Break and Absolute Duo - are running basically the exact same story line (albeit with different twists of their own) and doing a better job of it too.

The series' big dark twist should have been enough to make the show stand out and could have been something to make people take notice, but it’s been badly bungled through a combination of dumping all of its exposition into dull dialogue scenes right from the get-go, and also by never actually setting up any sense that the characters are in any kind of danger. It’s all very well for the series to say that Yu will kill Iris before she becomes a dragon during a big attack sequence, but the series never does anything to establish that he could be the kind of character who might go through with it. It’s not helped by the series constantly referencing events which took place before the series and making them sound much more like the kind of show you’d want to be watching. Admittedly the light novel origins of the series probably haven’t helped matters and may be largely responsible for trying to dump a whole series-worth of plot into the first couple of episodes so that they can get back to the important business of being a dull, lifeless harem show, but I’m not willing to excuse them for that as with effort all the problems could have been fixed but this is neither a good harem show nor a good action show.

There really just isn’t anything good to say about Fafnir Unlimited. Visually the show is just a mess of lazy character designs you’ve seen before and utterly abysmal CGI, and the series doesn’t even put any effort into the action or fan service scenes. Even the voice cast which boasts the likes of Yoshitsugu Matsuoka (Sword Art Online’s Kirito) and Manami Numakura (iDOLM@STER’s Hibiki) amongst others can’t do anything to bring life to the series, and all of them sound like they’re just killing time waiting to go back to other, better series that they’re working on.

I feel utterly safe in saying that Unlimited Fafnir is one of the worst shows I’ve seen for a good while and is most likely also the worst show of this season. If you want this kind of show then Manga Entertainment has both High School DxD and Aesthetica of a Rouge Hero out in the UK, and both are examples of how to do this kind of show well. For new works try World Break on Crunchyroll which, whilst still not great, is head and shoulders above this!

You can watch Unlimited Fafnir in streaming form on Crunchyroll.

1
Even if you go in with low expectations, Unlimited Fafnir still won't be able to live up to them.