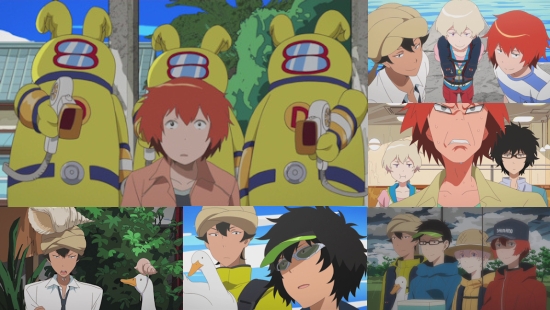 The first few episodes of Tsuritama proved to be a curious affair that didn't quite manage to resonate me on a personal level - try as I might, I couldn't find myself wholly drawn into its colourful, wacky and off-beat world, nor could I invest myself in the importance of fishing to the residents of the town of Enoshima as main character Yuki finds himself drawn ever-more enthusiastically into that particular fold.

As the series continues, fishing continues to be a centre-point of Yuki's progress from shy scaredy-cat into something approaching a normally functioning human socially speaking, thanks to the "tough love" of burgeoning friend and fishing expert Natsuki.  In turn, this sees the bonds between other members of the cast grow, to the point where even eccentric alien Yuki and the man sent to spy on him as part of the operations carried out by the mysterious "Duck" group Akira flourish to some degree.  Of course, things aren't all plain sailing outside of this increasingly important circle of friends, leaving all of this main quartet to face some kind of problem or other.  This is perhaps most notable in the case of Natsuki, as the situation surrounding his family comes to a head over the course of the series in impressive fashion to prove a definite high point in terms of its character-driven story-telling.

Ultimately however, Tsuritama's story is about Yuki and Haru, with both the reason for the latter's fascination with fishing and his interest in Yuki building to a crescendo throughout the second half of the series in suitably dramatic fashion as the former is faced with a crisis that really requires him to "come of age" and step up to the plate for his friends... and perhaps even the world.

As its plot points diverge and reconnect across the course of the series, everything that Tsuritama does is carried out in an accomplished fashion - always colourful, always quirky and always soundly delivered.  The trouble is, in spite of all this the series lacks any real heart - in this respect, the show's oddball nature works against it as its characters rarely feel grounded in reality to the point where we can empathise with them, and the comedic nature of its climactic events detract from some of the drama associated with its peril.

To some extent, I can't help but feel that this series is rather a victim of circumstance, airing as it did in both the same season and programming block as Kids on the Slope.  From a distance, both of these shows are the same in their ultimate goal - that being to espouse the importance of friendship through good times and bad - but the way they go about them is so different that Tsuritama's quirky scenario is a tough sell when placed against the sometimes harsh realism of Kids on the Slope.  Would Tsuritama work better without that shadow towering over it?  Perhaps, although I still believe that its flaws weigh down a series that otherwise had plenty of potential.

Given how reliant upon the viewer caring about its characters this series is, Tsuritama is a difficult one to rate - having formed no attachment to its main characters, the show left me cold, but if you fall in love with any of its main cast during its opening episodes then you'll almost certainly be able to derive a lot more enjoyment out of its subsequent efforts than I did.  That said, the fact that the series didn't persuade me to care about its main players is a glaring flaw in itself for such a character-driven outing, and as a result Tsuritama is a series that will struggle to live long in the memory despite its striking visuals.

You can currently watch Tsuritama in streaming form right here at the UK Anime Network!

6
Tsuritama lays out, develops and concludes its plot in an accomplished and colourful fashion - it's just a shame that it didn't make better use of its characters to persuade us to care about what we see.
COMMENT AND DISCUSS
blog comments powered by Disqus