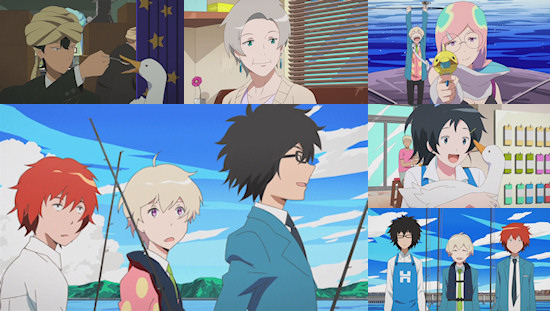 Interestingly, there's a common theme which runs across both of the series streaming to the UK from Fuji Television's noitaminA programming block this spring - that of an unlikely friendship between two very different characters, and how that friendship impacts upon their behaviour and development.

This major concept is, however, where those similarities end - While Kids on the Slope is very much grounded in its period setting, Tsuritama has its head in an altogether different place.  At the centre of the show's story is Yuki Sanada, a boy with a bit of a confidence issue, to put it mildly.  Under the gaze of others and with any kind of expectation thrust upon him, Yuki effectively breaks down - worse still, he does so whilst pulling the most grotesque grimace as in his mind's eye he imagines himself drowning under the weighty ocean of expectation surrounding him.  Given this proclivity, having to move to a new town and school with his kind but sickly grandmother and all this entails is pretty much the last thing he could do with in his life.

However, it could well be that this move to the sleepy seaside town of Enoshima is exactly what Yuki needs to come out of his shell.  Before he knows it, Yuki has himself a new friend and classmate - the out-going and decidedly eccentric Haru, who has no qualms about telling anyone who'll listen that he's an alien.  It seems that Haru, despite the reservations of his sister, has been chosen for a very special mission - to catch a particular fish.  With a world-class young fishing enthusiast named Natsuki also in his class, Haru soon forces Yuki and Natsuki together in the name of learning to fish (and thanks to a rather special water pistol with unique properties), while it seems that other individuals (and a duck) are watching Haru's activities in the wings with keen interest.

As you might already have derived from elements of that synopsis, Tsuritama is a bit weird, gleefully throwing aliens, ducks and mind control water pistols together into an otherwise realistically rendered fishing town.  Perhaps what is even weirder about this setup is that, although these wacky oddities are played for laughs on a regular basis in these episodes, they aren't really the central theme of the series at all up to this point.  Instead, the show is more interested in the hardships that face its characters - Yuki's shyness and his concern for his grandmother tops the bill, but Natsuki's dysfunctional relationship with his father also looms large over proceedings.  This then posits Haru as the conduit towards revealing and resolving these issues with his lack of understanding of human emotions and decorum, leaving him as the only person who will say out loud what everyone else is thinking.

All of this is rendered in an immensely striking visual form - Tsuritama is a riot of colour, distinctive character designs and animation to go with its premise, and it probably does more than any other element of the series to drag you into its fold as a result.  There's a vibrancy to the whole affair which lends itself well to the mixture of real and surreal within the series, while the show's musical score adds a friendly overture to proceedings to boot.

The trouble is, the visual impact of the series so far is pretty much where its fascination ends for me.  No matter how hard the show tries to leverage the wacky parts of its premise (and it does try entirely too hard sometimes), there's something indefinably unsatisfying about its story as a whole.  At times it simply feels contrived - Haru's water pistol is over-used as a tool to spray someone with a liberal dose of deus ex machina, for example - while at others the behaviour of its characters swing too far and too fast to be believable.  It's a shame really, as these points detract from some interesting points of character angst - Natsuki's irritation at his father's behaviour in particular, and in turn his father's reaction to this, is wonderfully played throughout and easily provides the stand-out moments of the series thus far.

Thankfully, there's still time for these issues to be resolved, or at least glossed over, within the series - you can't escape the feeling that the main thrust of the show has still been left out of sight given how little we know about the aliens and duck-wielding men in black running around.  For now though, Tsuritama feels too much like "just another coming of age story" given an extra coat of glossy paint thanks to its slick visuals, and with a few oddities placed upon its mantelpiece to make it seem smart and wacky when it's never entirely convincing in those claims.

It's certainly too early to write Tsuritama off, and encouragingly its fourth episode is by far its best to date, but it still has a lot of work to do to rise above the pack and stake its claim as something that will be notable once the rest of the spring anime season is little more than a fading memory.

You can currently watch Tsuritama in streaming form right here at the UK Anime Network!

6
Its colourful presentation and some well-written characters show plenty of potential, but conversely its flaws and inability to really grab the viewer work significantly against it at this point.
COMMENT AND DISCUSS
blog comments powered by Disqus