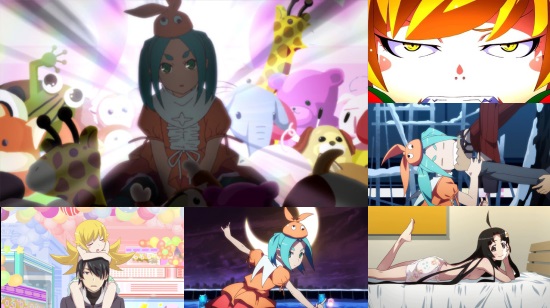 I’ve been pretty disappointed with the past few entries in the Monogatari franchise,  which has been a big shame given just how good the series has proven it can be. Now Tsukimonogatari is the latest entry to hit UK shores and it has something that was missing from the last two releases – Araragi and Shinobu have returned to the leading roles, which if nothing else should mean that their classic double act along with Araragi’s trademark perverted nature should liven things up a bit.

It’s a cold, snowy February for Araragi and friends (Tsukimonogatari is set between Hanamonogatari and Koimonogatari if you were wondering) but it’s not going to be a fun-filled jaunt through to Valentine’s Day this year... whilst engaging in his usual perverted sis-con antics with Tsukihi he discovers he’s got a bit of a problem – his reflection has vanished, a condition which both he and Shinobu can link to a very familiar apparition: a vampire! Desperate to find both cause and answer to what’s happening to him (although Shinobu is more than happy whichever way things turn out as long as there are donuts in there somewhere) he enlists Yozuru Kagenui and Yotsugi Ononoki (who has developed an unusual habit of sitting inside UFO catchers since we last saw her) to help him out. It won’t be a straightforward affair though, as the two pairings have always been at odds, and even if it were otherwise an old acquaintance of Yozuru and Yotsugi’s is in town and he’s not here for a fun-filled drunken reunion.

Without preamble, Tsukimonogatari is by far the best the franchise has been since Nekomonogatari White. From beginning to end this is like a triumphant victory lap of all the best the franchise has to offer (other than a few missing characters that is – Hanekawa, Kanbaru and Senjoghara are largely absent from proceedings this time around) and prove that SHAFT are both still more than capable of pushing out the good stuff.

The plot is a rollercoaster trip through all kinds of the best madness the series can put out – the opening is a little weak with a somewhat overlong forced exposition scene enlightened only by having Yotsugi dress up as each of the various apparitions that have plagued the characters to date (why this hasn’t been a range of figures I have no idea), but from then on you get Araragi engaging in a gloriously pervy and uncomfortable bath with Tsukihi which brings back all the fun of Nisemonogatari’s toothbrush sequence. Following this you get Araragi bantering with Shinobu, witty dialogue scenes with Yozuru and Yotsugi and a carefully planned rescue complete with a great shocker of an ending. Perhaps absence really does make the heart grow fonder as this plot arc really makes it very clear just how great Araragi and Shinobu are when done right - the pair brighten every scene they’re in whether its Shinobu being manipulated through her vanity or Araragi having a serious ethical conversation with a girl whilst holding her skirt above her head. The script shines and the voice actors are absolutely on point here, especially Maaya Sakamoto as Shinobu who drives home everything you love about the character and leaves you begging for more.

On the technical side things have picked up a lot too, with the CG blending much better with the rest of the animation and the snowy vistas proving to be a brilliant look for the series trademark beautiful environments. It certainly helps that the series has pulled back on just how weird and bizarre the backgrounds get too, with this arc focusing much more on more subtle character beats (a personal favourite is Yotsugi doing the dance moves to Platinum Disco - Tsukihi’s opening from Nisemonogatari – in the background whilst other characters talk about her in the fore). It does have to be said however that the fan service is a little awkward throughout this arc, focusing as it does on the younger characters (though the show knows exactly where to draw the line) whereas a place where you’d naturally expect some from one of the older characters goes without.

To round things out all that’s left to be said is that this is the one we’ve been waiting for. It’s pure, unadulterated, eye-wateringly gorgeous fun and that’s exactly what we’ve all come to expect from the series.

9
A triumphant return to form for the Monogatari series.
COMMENT AND DISCUSS
blog comments powered by Disqus