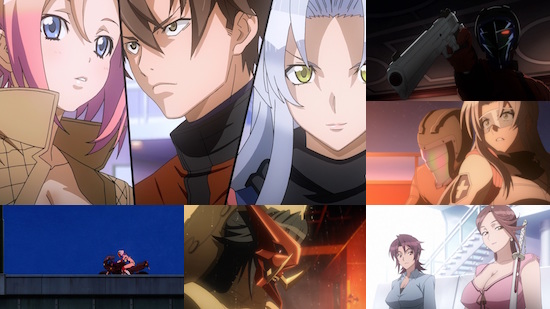 Triage X set out it’s stall straight from the opening scene, with a long lingering shot of one of our main character's more than ample bosom. This is followed by more boob shots, a massive rifle, some explosions, gunfire, lots of medical terminology and a motorbike, all interlaced with more breasts. That pretty much sums up the three opening episodes of the series: The show provides a constant stream of boobs, bikes, bullets and booms laced with terrible dialogue. There is also little evidence of a plot thus far - kill bad guys and flash boobs appears to be the long and the short of it. I could easily end the review here and you would probably know everything you needed to know about this series and whether or not you want to watch it.

Triage X follows the escapades of Black Label. Not to be confused with a certain famous Whiskey or the terrible lager (though I could certainly make parallels with the latter’s lack of flavour and laddish core market), Black Label are a vigilante group made up of a mix of medical personnel and high school students, as well as an oddly placed idol with a penchant for explosions. The group are based in Mochizuki General Hospital, which provides a prevalence of ‘sexy’ and ridiculously well-endowed doctors and nurses for the series to call upon, as well as the reason for lacing medical terminology into almost every sentence of the dialogue. All the medical speak makes for really terrible and cringeworthy dialogue - Black Label’s mission is to “treat” the “tumours” of society, and they do so with extreme violence, prejudice and of course plenty of boobage.

As has become the norm these days for streaming series, there is also a fair amount of self-censorship tempering the smut and violence a little, though not by much, with the appearance of things like the occasional bit of oddly placed but well-formed steam here and there. I assume this will be removed at least partially for it’s eventual Japanese physical release, though I’m not sure what it will add to the series other than pushing it slightly further into the gutter. Beyond that, there is nothing of any depth or substance here, the plot (such as it is) serves as nothing more than a thinly veiled reason for the action set pieces to happen. The action at least is competent, even slick at times, but the constant chest and crotch-height camera angles make it tricky to enjoy Triage X for it’s action alone.

Triage X then is a lot like some of the shows late night Channel Five made infamous, but in animated form: Too tame to be considered pornography, yet too explicit to be taken seriously as anything else. That said Triage X is probably hilarious if you’re drunk. It has the possibility to be the kind of anime you watch with a group of friends after a crate full of beers, because you want something to laugh at for all the wrong reasons. So far it has flirted with the ‘so bad it’s good’ boundary a few times, but hasn’t quite made it there yet.

You can currently watch Triage X in streaming form on Crunchyroll.

3
Boobs, bikes, bullets, booms and nothing of any substance.
COMMENT AND DISCUSS
blog comments powered by Disqus