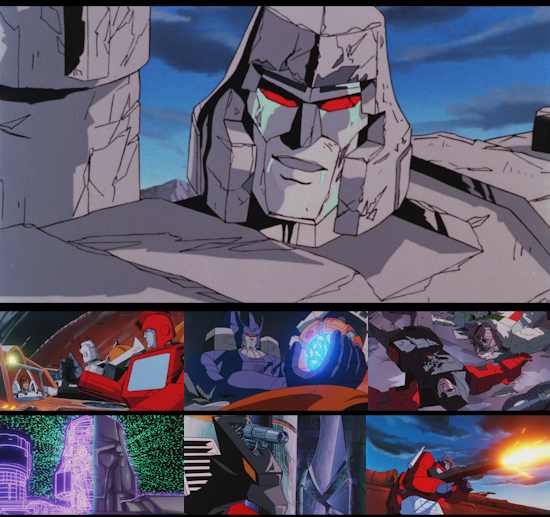 We've been talking a lot about nostalgia here on UK Anime over the course of 2016 - Manga Entertainment in particular have dug into a rich well of such nostalgia by acquiring the likes of Pokémon and Digimon, while Anime Limited and MVM Entertainment have both been bringing back classic series to the UK, normally in a remastered Blu-ray form.

While I've taken a look at some of these titles without the benefit of being steeped in those nostalgic memories myself, that isn't the case here - Transformers: The Movie is perhaps one of the defining movie-going memories of my childhood, and an experience without which I literally wouldn't be sat here writing for an anime web site. Indeed, every element of my enduring passion for anime and even the kinds of narrative devices I most enjoy within the medium can be traced back to this formative experience soaked in by my seven year-old self. If you're looking for an entirely unbiased opinion on this film and its new 30th anniversary Blu-ray release, you won't find it here.

Given that this film has already enjoyed numerous UK home video releases in the past, we should probably start by tackling the biggest question of the bunch - why should I care about this edition? Setting aside its Steelbook treatment and the film's arrival on Blu-ray, the most notable element here is that the film has undergone a 4K remaster which has been used as the source for this HD edition of the movie. What's more, the two-discs offered within the set provides the film in both widescreen and full frame (aka 4:3) editions, which also ensures the long-standing rows about which version is "correct" can be set aside as you'll get the best of both worlds here.

There's a bonus feature on these discs that gushes about the benefits of the remastering process undergone for this release, and it has to be said that this gushing is well-deserved - after a number of muddy and barely passable home video releases, this edition of the film is simply beautiful. The film has mostly made the transition to 1080P effortlessly, with only one or two shots looking out of focus or otherwise "off", while the painstaking efforts to correct flaws and bring out every ounce of detail and colour from the source print have reaped incredible awards. I've seen some dismiss this movie as a cheaply made off-shoot of a 1980s cartoon with animation to match, but that really isn't the case - Transformers: The Movie is a wonderful example of the hand-drawn animation of the era, and Toei Animation's craft as exhibited here shouldn't be understated (ironically, given Toei's reticence to talk too much about this era of the studio where they handled a number of outsourced productions for the western market). I could pick out a few gripes around shots that maybe could have done with some extra clean-up of dirt from the source material, but these are but minor niggles for a film that finally has the transfer that it absolutely deserves.

Similarly, the film's 5.1 DTS-HD Master Audio mix is equal to the task - brash, punchy and befitting of its weird amalgam of 1980s rock and electronica layered beneath the laser battles and vocoded dialogue that punctuate the film. A stereo mix is also available for the purists who want to remain closer to the original theatrical presentation, but if you have a surround sound system it's worth taking the plunge on this audio reworking as a great companion to the new visual treatment.

But what of the film itself? Transformers: The Movie is renowned for the unsympathetic slaughter of the franchise's old line of toys to make way for new characters, and while that may have made it unpopular with kids and parents at the time (although not me, I loved it!) it does grant the film an edge that has allowed it to endure. The film's first act is, put bluntly, a murder-fest - no sooner are we catapulted two decades into the future to the year 2005 (which seemed impossibly far-reaching in the mid-80s) than the Decepticons are assaulting first an Autobot shuttle, then their Earth-based city, leaving a trail of corpses in their wake. Only Optimus Prime can turn the tide, in a brief but brutal battle with arch-enemy Megatron that leaves both iconic figures in a critical condition - not that there's any time for grieving when a giant planet-devouring robot named Unicron is headed straight for Cybertron as the next delicacy on his menu. The only thing Unicron fears is the Autobot Matrix of Leadership, but is there anyone in the Transformer's ranks capable of wielding and unleashing its unexplained power?

Once it's culled its older cast members, the film's Star Wars-esque plot serves the film in decent stead as an adventure across the galaxy, providing plenty of scope for big action set pieces and imaginative encounters, powered along by the aforementioned soundtrack provided by Vince DiCola and peppered with snappy dialogue ("I've got better things to do tonight than die"). Without any affinity for the characters and they toys they promoted the film admittedly is just serviceable rather than spectacular, but the unintended side-effect of the film's first act is that it does provide a genuine sense of peril where nothing seems safe from harm and a happy ending seems impossible for much of the film until we suddenly hit its rushed ending.

In addition to its remastered presentation, this release also compiles bonus features created for previous versions of the movie on home video, including an audio commentary that includes thoughts from director Nelson Shin, and a barrel of other extras talking to members of the cast and crew, storyboards and trailers. Given that we've seen other recent similar releases lose extras from prior editions (Pokémon movie Steelbook, I'm looking at you) it's good to see virtually everything present and correct here.

While my seven year-old self would give this release a bajillion out of ten, the grown-up critic within me is trying to be a little more measured in my thoughts... and largely failing. From prior experience, I've tried to introduce newcomers without any history with the original Transformers cartoon and toy line and it's failed to make any impression on them, which does leave this as a movie best served to those with childhood memories of it. In those terms, this is a fantastic nostalgia trip to take - the source material is all present and correct, but shorn of its years of wear and tear to look and sound fresher and better than you've ever seen it before, and presented alongside plenty of enjoyable reminiscing from those who were involved in its creation.

Thus, The Transformers: The Movie is a perfect slice of the 1980s - a superb soundtrack backing up a film that is desperately trying to sell you toys and somehow stumbling upon a formula that gives it an iconic place in the history of its era into the process. Beyond that, this remastered edition allows you to really appreciate the animation and craft behind the film - its visual quality is arguably better than a film of this ilk has any right to exhibit, and this stunning new transfer allows you to luxuriate in its surprising beauty in ways never before possible. That, above all else, makes this new edition a must-buy for Transformers fans looking to relive their childhood while also gleaning new joy from this film.

9
This new remaster of the mid-1980s cult classic gives the film a new lease of life, allowing you to fully appreciate its craft as well as soaking in the nostalgia it evokes.
COMMENT AND DISCUSS
blog comments powered by Disqus