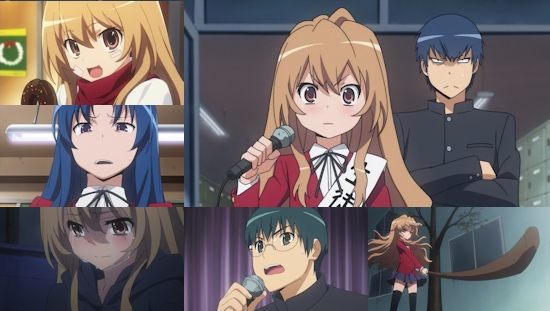 We're told over and over again throughout our lives how important first impressions are, and it's a fact that - unfair though it might sometimes be - is a tried and tested truth about humanity; people will make judgements of your personality and character based on nothing more than how the person before them looks.

This fact is particularly depressing for the protagonist of Toradora, Ryuuji Takasu - deep down he's a nice guy and a conscientious fellow, but his inherited genes have decided that to grant him "shifty eyes" that, quite frankly, make him look like a delinquent, a yakuza, or whatever kind of ne'er-do-well flits into the imagination of the individuals he encounters. No matter how hard he tries, he hasn't been able to shake the impression his school associates have of him as some kind of dangerous loose cannon, and this is only made worse with the knowledge that the girl he longs to be with is never likely to pay him any attention on account of those wretched eyes of his.

Amongst Ryuuji's new classmates as a new page in his high school life begins, however, is a girl with a very similar problem, although in this case her reputation is entirely justified. Taiga Aisaka may look like a fragile doll, but in actuality she's far from it - a ferocious personality with a fuse so short she's liable to explode into rage at the slightest provocation, earning her the nickname of "The Palmtop Tiger". When Taiga and Ryuuji literally collide on their first day as classmates, everyone recoils in fear from the expected fallout - however, this encounter may just spark fireworks of a different kind.

Although the relationship between Ryuuji and Taiga forms the centre point of Toradora, this is no cut-and-dried romance story - the show's cast is bolstered substantially by the pair's circle of friends, two of whom are both part of the main duo's romantic entanglements in their own right. A tale of love it might be on the surface, but as the series progresses it arguably becomes primarily a story of friendship - all of the main cast fall into emotional turmoil at some point or other, but they all get by with a little help from their friends (someone should write a song about that...) even when helping out the individual in question is sometimes counter to what others in the group truly desire for themselves.

It's hard to sum up from a synopsis or simple descriptions just how beautiful a series Toradora is - not visually (although it is competent in that regard with occasional moments that stand out for their stupendous fluidity), but in terms of its story and the heart with which its tales are delivered. The show has a wicked sense of humour and a great eye for slapstick or witty one-liners as the cast bounce off of one another, but it also knows how to pack a huge emotional punch with even the smallest moments. Even having watched this series multiple times there are scenes which make me break down in tears. Every. Single. Time. Heck, I'm tearing up a little just thinking about it while writing this review. These aren't necessary borne from the moments full of emotional energy either but simple, quiet reactions to unfolding events that demonstrate the turmoil within in a restrained yet powerful fashion.

Of course, none of this would work if you didn't care about the characters, but this too is one of Toradora's strong suits. All of the main cast are lovable in their own particular ways - most romance shows of this nature will leave you rooting for one particular character or pairing, but here all you'll want is for the cast to be happy without worrying too much about the exact machinations thanks to the strength of the characters involved, ensuring that its narrative is consistently enjoyable without becoming fraught on account of your personal preferences. Most importantly of all, every character - including relatively incidental ones - feel human. Normally friendly characters argue and fight when a raw nerve is touched, others act childishly when things don't go there way, and the end result feels like a perfect distillation of adolescence that may well evoke your own memories of that period.

The rest of the show's presentational package is also presented in a compelling fashion - the series boasts superb opening and ending songs and credit sequences, the soundtrack as a whole is quirky but enjoyable, the Japanese voice cast are all on top of their game from beginning to end, and of course we've already mentioned that the broader visuals of the series can explode into life in spectacular fashion when called upon. Toradora's English dub is arguably the only weak link here, but even this is passable even if it doesn't quite manage to capture the intensity of the original performance.

This UK release of the series also features the show's (admittedly forgettable) OVA episode as well as other comedy shorts to make for a comprehensive release, and although the show isn't a native HD offering and looks perfectly watchable on DVD it can't be denied that the Blu-ray release is, as always, the preferable viewing experience in terms of image fidelity and clarity.

This is normally the point in a review where you might expect a "but"; a moment where we point out some flaws that detract, however slightly, from the overall experience of watching a series. Not so here - Toradora is in the A-league of romance anime, and arguably sits unchallenged at the top of its league. Sure, it isn't perfect, but it's frighteningly close to it, and provided that you can find an affinity with and love for its main cast of characters then you'll laugh your heart out and then cry your eyes out time and again over the course of this series.

There are plenty of series that can boast this, but none do so with quite the level of Toradora's craft - such is its potency that it stands up to repeated viewings with ease, and such is the enjoyable intensity of the viewing experience that you'll be tempted to start watching the series again as soon as you've finished it, with the realisation that saying goodbye to its cast of characters has left a hole in your heart that only re-joining them again can fill.

Toradora isn't perfect, but boy is it close, and if watching a romantic comedy-drama appeals to you in the slightest this is an absolute must-watch without question.

10
With hilarious comedy, tear-jerking romantic drama and a wonderful set of characters that carry the whole thing off with aplomb, Toradora is a demonstration of exactly how a series like this should be.
COMMENT AND DISCUSS
blog comments powered by Disqus