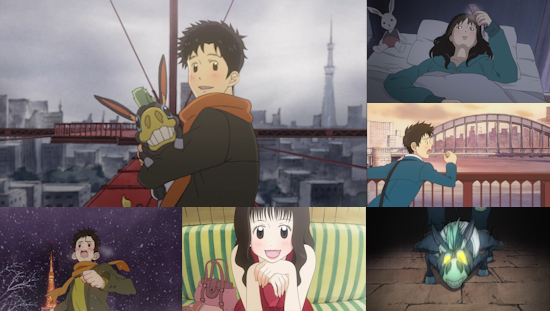 Relationships are hard. Even the most self-assured person can come unstuck from trying to figure out what others think or feel about you, sending you into a vicious cycle of insecurity, and if you're already lacking in confidence then the entire thing can quickly turn into a nightmare.

With that in mind, it's understandable that the male lead of Tokyo Marble Chocolate has a checkered past in terms of relationships - none of Yudai's romances have lasted and most have come to an ignominious end, usually thanks to his inability to utter those all-important words: "I love you". This time, he swears, will be different though. He might have struggled to make his feelings clear to his current girlfriend in the past, but today's date with her is the day where he'll proclaim his love and end all of his romantic troubles.

The course of true love never did run smooth though, and so the date in question descends into farce - a mix-up with the present Yudai was planning to give his girlfriend sees her vanish while he tries to clear up the confusion, and his subsequent search for her provides twenty-four hours of pain both physical and emotional. Has he failed at the final hurdle once again without getting to express his love?

Just as we're resigned to sitting and watching Yudai's failure from afar, so the second half of this OVA (this is a two-part OVA rather than a film, despite designations to the contrary) shifts to the perspective of the girl on the receiving end of this farcical day in the life. For her part, Chizuru is not exactly a picture of romantic success herself, with some kind of mishap or other wrecking all of her previous relationships. In spite of all of this, Chizuru is not easily won over, and she's made an important decision as we peer into her situation - as much as she loves him, this is to be her last date with Yudai, as she's not convinced he's serious about their relationship. After all, he hasn't even told her than he loves her! Thus, we see the same events unfold but through the eyes of Chizuru's experiences - experiences which teach her a lot. The question is whether anything that she learns is likely to change her mind about Yudai.

If we were to sum up Tokyo Marble Chocolate in a single word, it would be "endearing". Both characters that share the OVA's running time (when they aren't both being usurped by the real star of the show, but we won't spoil that for you) are effortlessly likeable - flawed and clumsy, but all the more lovable for those very reasons as we watch their fumblings, misunderstandings and pratfalls with a mixture of humour and horror as everything seems to go wrong for the hapless couple. That these two episodes can make you feel anything at all in its short fifty minutes of animation is high praise indeed - it takes most romance-led series far longer to build character than that - and points to the assured, precise nature of the OVA's script and direction.

Not that it ever feels mechanical in that precision - the experience of watching Tokyo Marble Chocolate is a gentle but nonetheless evocative rollercoaster that leaves you pointing and laughing at its cast one moment, then covering your eyes or mouth the next in the hope that this isn't the moment where everything unravels. The time flies by and the entertainment value on offer here can't be doubted.

This is enhanced greatly by the life and energy afforded Tokyo Marble Chocolate by its animation. Character designs are simple but effective, but the way they move and react means they're never lacking when it comes to expressing emotion in a way that brings to mind the likes of Honey and Clover. The OVA's comedy in particular is greatly enhanced by the manner in which it's animated, and everything about the production feels alive in a way that is vitally important in making it stand out and achieve its desired effect. There's a real understated beauty to the animation on show here, particularly as it pertains to Tokyo itself (the only part of the title that actually seems to feature here - I didn't spot any prominent marble or chocolate) - Tokyo Tower is the backdrop to much of what occurs, and there's a misty-eyed romanticism around the depiction of the city itself that doesn't mesh with reality but is a perfect location for the story it tells. Some dynamic angles and camera work round off a decidedly accomplished visual package - a far cry from director Naoyoshi Shiotani's work on Psycho-Pass but an equally good example of his proficiency.

There's no English dub on this release, but the Japanese voice cast do their jobs well and the film's music also fits Tokyo Marble Chocolate's mood to a tee. Subtitles are without issue here, so we don't have any complaints about this UK release at all.

Tokyo Marble Chocolate isn't the kind of thing you'll find many people ranting and raving about as a work of genius - it isn't that kind of work. Instead, this is the kind of thing to sit down and stick into a player when you're looking for something easy-going, entertaining and engaging but with enough emotional heft so as not to feel entirely vacuous. It isn't a film that has much to say - beyond perhaps my opening line that in this review that "relationships are hard" - but I can't think of anything else I've watched this year that has charmed me in quite such a sweet and earnest way.

I'm not sure whether I can quite muster the courage to take Tokyo Marble Chocolate in my arms and whisper "I love you", but I certainly have plenty of strong, positive feelings towards it.

Physical extras in this DVD/Blu-ray Collector's Edition comprise a 40-page booklet featuring character art and information, as well as a profile on and interview with director Naoyoshi Shiotani.

8
This short, sweet and earnest little love story won't blow your mind, but it'll easily win you over with the sheer force of its endearing charm.
COMMENT AND DISCUSS
blog comments powered by Disqus