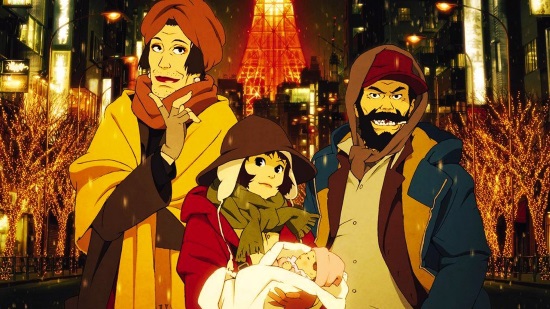 Christmas is a time of miracles we are told. A time when kindness and love towards your fellow men and women less fortunate than you is not only expected but often given (at least according to the saccharine TV movies that litter SKY at this time of year) with warmth and a smile, well maybe not always. Gin, Hana and Miyuki are homeless, spending their days dotting around Tokyo trying to survive on scraps rescued from bins and the handouts from their local church. The Christmas celebrations roaring around them meaning very little except to remind them of the cold and snow they have to endure at the time of year. However their usual routine is interrupted while they garbage dive on Christmas Eve and come across an abandoned baby, this is the inciting incident for what becomes a few days packed with incident, danger and what may or may not be some otherworldly miracles that see our three accidental heroes forced to face their pasts and their futures.

My viewing of this film came right in the middle of me finally getting around to seeing what all the fuss was surrounding one Satoshi Kon. So sitting down to this following, Paprika, Perfect Blue and Paranoia Agent I was expecting an other trippy tale involving murder, mayhem and the baby possibly being a imaginary representation of one of the homeless folks repressed delusions, did I get that? Nope, instead I was treated to a warm, funny, human story about past regrets, facing the future, family and (whisper it) an underlying message on the real meanings of times like Christmas. This film was another excellent piece of cinema by a master showing not only his versatility but skill as a story teller, weaving multiple threads together effortlessly with co writer (the equally talented) Keiko Nobumoto into a wholly satisfying, if slightly contrived, story.

As with Kon's other works character is at the forefront, with writing strong enough to make sure not only our three leads are living breathing people with relatable issues but even the characters on the periphery have some meat on their bones. The nominal lead Gin does his best to push his grumpy, uncaring old man personality but fails to keep his more caring and nurturing side coming out even as he harbours some massive personal failings. Miyuki is a more recent addition to the streets having only been homeless for six months following a shocking incident with her father that she is fleeing from the consequences of. Her background is possibly the darkest of the trio and the only story with flashbacks showing how different she used to be, which gives an interesting juxtaposition to her present state. Rounding out the group is Hana a trans woman who acts as the defacto mother of the group and one responsible for keeping the baby (naming her Kiyoko) and driving a lot of the plot. For some Hana will be a bit of a contentious point, with some of the language used to describe her a little on the nose but she is a full developed character with her own dreams, agency and back story. I'm sure the perpetually outraged and offended (aka 95% of social media) will still take issue if she ever bleeps onto their radar missing the depth and nuance that she displays. The only members of the cast who feel slightly too undeveloped are Kiyoko parents, especially the portrayal of the mother which maybe needed slightly more to flesh her out.

Studio Madhouse once again does a sterling job giving a real and gritty feel to the animation and keeping within Kon's usual visual style. The characters all look great as well feeling like people you could pass in the street rather fittingly. There is some violence in the story but is muted compared to other entries in Kon's catalogue but wont be suitable for younger anime fans and is most definitely the kind of thing you would not see in a western Christmas flick (along with the transvestite bar, gun shots and roaming gang of youths)

Overall this is another great entry in Kon's far too short filmography and proof that Christmas movies don’t have to be achingly saccharine sweet eyesores, they can be dirty, moody and bad tempered and still manage to make all of us old cynics feel something.

9
A warm, engaging Christmas movie with a twist. A must for fans of the director and a strong recommendation for those not as fond of his tripper works.
COMMENT AND DISCUSS
blog comments powered by Disqus