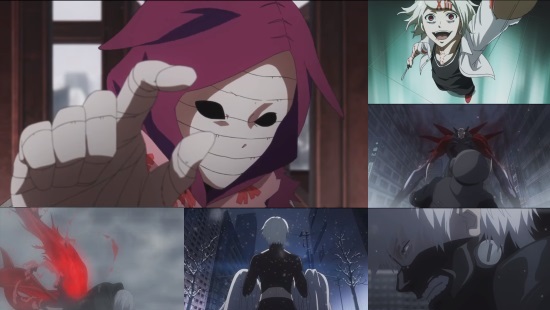 Following on from exactly from where the first series ended, Tokyo Ghoul √A takes the focus away from Kaneki and now chooses to focus on a war between humans and ghouls. On one side is the humans government agency - Commission of Counter Ghoul (CCG) and on the other is the Ghoul faction – Aogiri Tree.

The biggest problem with Tokyo Ghoul √A is that it focuses on completely the wrong cast of characters. In this season, the CCG agents get the majority of the screen time whilst the main characters from the first season get relegated to supporting roles. Kaneki is visibly absent for most of the series, only making brief appearances during confrontations between Aogiri Tree and the government, while his character has regressed to an almost mute persona that no longer gives the same insights nor questions the way things are with the world like he did previously. The viewer could make the assumption that due to his traumatic experiences in the first series, his personality has changed to compensate for his defeat there, indicating acceptance of the way the world is and the measures he has now taken to integrate into his new society... except there seems to be no indication that this is the case, since Kaneki barely vocalises any of his thoughts now, leaving his actions to be questioned by his colleagues who make assumptions based on seeing him integrate into a group he previously had no need to have ties with. Beyond this, other characters seem to just act as background characters with sub-plots that really have nothing to do with what’s going on in the story proper. Near the end, a few characters get pulled into the main conflict of the series but it feels very forced on account of how sudden and out of left field it is. Indeed, it can be argued that most of the conflicts and drama in Tokyo Ghoul √A are rather forced, and there for the sake of having a conflict that needs resolving as an excuse to have more action scenes in the series.

This wouldn't necessarily be a problem if the action scenes hadn't turned into very formulaic encounters where the ghouls overwhelm the CCG agents, before one of them comes in with a special weapon to turn the tide before then in turn being overwhelmed by one of the powerful Aogiri Tree ghouls. The other major problem with these action scenes is that the series makes it hard to have the viewer find a side to root for - both factions here were enemies within the first season, and since the series tends to focus on the CCG agents more it can stand to reason that they are ones that you should root for if not for the fact that Kaneki, the protagonist of the first series, turns up and fights against the CCG. Ultimately, it's very hard to be engaged in any of the action scenes since it's hard to care for the characters that are engaged within them.

One final problem with these action scenes are that there are too many generic characters on screen at once, which leads to the detail in character designs noticeably dropping a level since the first season. The style and animation also seem to suggest a significant drop in time or budget, as things don't look as dynamic and fluid as they once did.

That being said, whilst the series arguably focuses on the wrong characters, some of the CCG agents do make things more enjoyable. The main silver lining of here is Juzo, possibly the most interesting character in √A due to Kaneki's change in personality and noticeable lack of presence. There are a few plot points that are explored with this character that sadly don't get resolved, but if these points had been expanded upon and resolved this would have made the series better and would have given more of a firm reason to take focus away from Kaneki and the Anteiku ghouls. We also get treated to back story of some of the other agents, which helps expand some their characters in this series but also essentially ruins some of the notable aspects of their personalities from the first season. Since the CCG worked as the show's main antagonists within that first season, Tokyo Ghoul √A works to de-vilify some of the characters through character moments that show their fear in fighting the ghouls and the hard work and effort they put in to their job. This works for some of the characters in the show, but for others it really doesn't.

While these are huge detractors, the series isn't outright terrible. Some of the action scenes near the end of the series are quite entertaining, one of the characters has quite an interesting back story and the snippets you see of characters relegated to the side lines - whilst brief - are still rather entertaining. Funimation Entertainment's dub of the series, while not their best, is still pretty decent, with Juzo stealing the show thanks to the energy put into the performance of his character. Compared to how interesting the first series was however, Tokyo Ghoul √A feels like a step in completely the wrong direction. A big disappointment that comes nowhere close to reaching the heights of the first season.

5
A disappointing follow-up to Tokyo Ghoul that loses almost everything interesting from the first series.
COMMENT AND DISCUSS
blog comments powered by Disqus