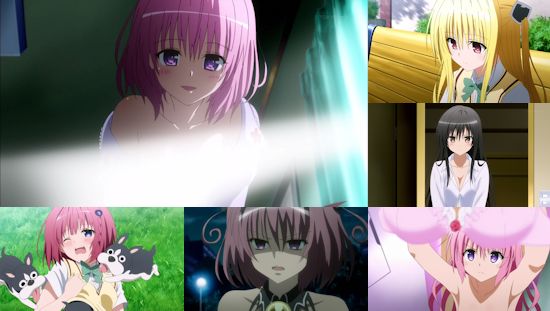 Let's be honest, certain genres of anime and manga have never shied away from being sexual and titillating to varying degrees - the old assertion that "sex sells" has always proved itself to be true, and the success of a number of fan service led franchises only lends further credence to that idea.  Even with this knowledge however, To Love-Ru Darkness has garnered a reputation for taking the prevalence of fan service as far as it possibly can, stopping just short of become a full-on "hentai" manga.  Does it really dare to bring all of this content across in animated form?

First and foremost though, as a sequel to the original To Love-Ru (and its third animated series) the show has a some explanation of its back story to churn through - this it does in short order to introduce its male protagonist, potential future king of Deviluke, and the variety of alien entities and the like (all of whom are cute girls, obviously) surrounding him.  After filling us in on a botched confession to the apple of Rito's eye, Haruna, and a slightly less clumsy explanation of his feelings to another of the girls orbiting him, we quickly get to the crux of the matter - this boy clearly needs a harem!

At least, this is the thinking of Momo, one of the sisters of Lala (the female star of the original series) who figures that if Rito is going to become the king of Deviluke then he might as well make the most of his position by making everybody happy.  In fairness to the series, at least it doesn't beat around the bush when it comes to toying with its harem element, instead just throwing it out there and effectively making it the central tenet of the show - if you're going to do fan service, you might as well go all out!

From here on, everything is effectively as you'd expect - lots of bawdy sex comedy that looks for any opportunity to ensure that its female characters flash their underwear, get naked, find themselves attacked by tentacles or over-exuberant creatures and so on.  There's also a sense of potential threat injected into the series in the form of assassin Yami and, more importantly within Darkness, her more proactive sister Mea.

Of course, none of this really matters, as we're mostly just watching this to see some female flesh - a point where the TV (and ergo the streaming) broadcast of To Love-Ru Darkness falls flat on its face.  While I can fully believe that the series is pushing new boundaries in its search of erotic fan service, I can't actually tell you for sure because the series is censored *hugely* - unless your idea of a turn on its lots of steam, black bars or over-bearing lens flare that obscure what's occurring on-screen, you won't be seeing anything much of interest at all here.  Perhaps the oddest thing about this is not the censorship itself, but how unevenly it's applied - one moment the camera will dip low to get a shot of a girl's panties, then the next a very similar shot will be censored by black bars.  It adds an extra layer of suspicion that this censorship has been done in a lazy and half-baked fashion, safe in the knowledge that fans will be buying the Blu-Rays in droves in Japan anyhow.

Stripped of its, err, stripping, there really isn't a lot to say about To Love-Ru Darkness - its male protagonist is a complete wet flannel and its female characters range from devious nymphomaniac through to near-silent blank slate.  It's all very typical and by the numbers, and most of the scenarios that derive from each episode are really just entry points for that fan service rather than pieces of decent narrative or comedy in their own right.

As a result, this makes To Love-Ru Darkness a very tough series to recommend in its streaming form - if you're looking for fan service, it's obscured to the point of being obliterated, and if you're looking for a good story, be it character-driven or otherwise, the series is sorely lacking.  Maybe if we get a physical release of the series minus its censorship at some point, Darkness will be a show capable of catering to at least some anime fans.

You can currently watch To Love-Ru Darkness in streaming form via Anime on Demand.

3
Its fan service is obliterated by bars and beams of light, and the show has no real story to speak of - in its TV broadcast form, there's virtually nothing to make this series worth watching.
COMMENT AND DISCUSS
blog comments powered by Disqus