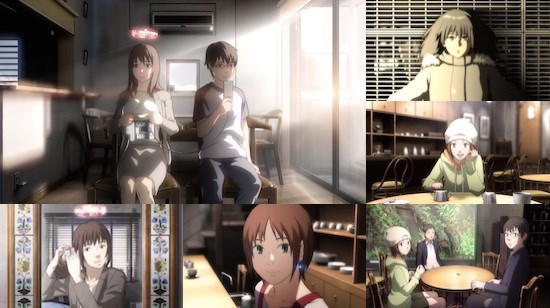 Time of EVE: The Movie sounds like a bit of an oddity, in that it’s a distillation of an earlier six part ONA series converted for the big screen. Originally released online between August 2008 and September 2009 the series eventually made the transition to Blu-ray and was made available here last year via the Time of EVE online store. When things made for the small screen transition to something more cinematic there’s always a danger of the end product feeling out of place, or worse, butchering the source material to fit a film’s differing format and runtime. This was particularly worrisome for us here at UK Anime as we are all huge fans of the original ONA, and it is one of the rare series to obtain a perfect 10 from our reviewers. There’s also the matter of the massive Kickstarter campaign which funded this release. Therefore, we can safely say that Time of EVE: The Movie Deluxe Edition has a great deal to live up to.

Set in the near future, “probably Japan”, the titular Time of EVE is a coffee shop with one golden rule: That there must be no discrimination between humans and robots. The film presents a world where ownership of androids has become commonplace, and they are used for all sorts of tasks ranging from household chores, like cleaning and shopping, all the way up to working in larger scale operations such as farming and manufacturing. This, in fact, is one of the main points of contention within the world of Time of EVE. Have androids been allowed to encroach too far into the world of humans? Should androids be treated simply as tools to be used or as sentient beings? Would you trust food grown by an android? Can androids love? Can they lie? Should androids be allowed to perform jobs traditionally filled by human workers or are they stealing jobs from their human counterparts? These themes resonate with many modern day issues, in particular you will notice echoes of contemporary problems surrounding xenophobia. Though none of this is tolerated within the walls of Time of EVE, not unless you’re willing to risk a tongue lashing from Time of EVE’s resident barista Nagi.

The cafe’s singular rule means that any androids entering must turn off the only obvious visual distinction between them and their human counterparts: a ring of light which normally circles above their head displaying various operational and diagnostic information. Because you can’t tell who’s human and who’s not within the confines of the cafe, the lines between man and machine blur. Who is human and who isn’t? This question perturbs Rikuo and Masaki, two high school students who stumble upon the cafe thanks to Rikuo’s seemingly wayward house-droid: Sammy. The boys slowly meet and interact with all of the cafe’s regulars, and it's through their eyes that we witness the bulk of the story unfold.

Time of EVE wears its western science fiction influences on it’s sleeve, with clear influence from the likes of Isaac Asimov, Arthur C. Clarke and Phillip K. Dick. Some of the references to western science fiction are wonderfully subtle, others not so much. Subtlety is a theme I suspect you will see a lot of in relation to Time of EVE: The Movie, because the film’s brilliance lies in it’s subtlety of storytelling. The less subtle references are largely played for laughs and will likely have fans of cult science fiction movies in stitches, such as a hilarious The Terminator pastiche when an ‘elderly’ customer visits the cafe. This is indicative of the rich vein of humour which runs through the film.

When you think of science fiction in animated form you probably think of names like Ghost in the Shell or Akira - that we mention Time of EVE: The Movie in the same breath as those classics, not just of anime but of science fiction cinema in general, should tell you a great deal about the quality of this film. However, while Ghost in the Shell and Akira are action heavy, Time of EVE: The Movie is almost exactly the opposite. It’s a much more sedate and contemplative piece, and while it shares some themes with those classics (especially with Ghost in the Shell’s thesis on what it is to be human) it’s a completely different beast - the film provides a masterclass in subtle and intelligent storytelling as it follows Rikuo and Masaki in their metaphorical voyage of discovery and as they contemplate what it means to be human.

I’ve been lucky enough to have seen the film in both it’s native Japanese and the new English dub which was produced thanks to the Kickstarter campaign which funded this physical release. The good news is that both are excellent. However, as often seems to be the case with English dubs, it lacks some of the subtleties of the original Japanese and tends to spell things out a little more. While we’re on the subject of audio, the soundtrack fits the film perfectly, though including a song by UK Anime favourites Kalafina as your main theme never hurts matters in that regard. The soundtrack is also included as part of the Deluxe Edition package, which I’ll get to in more detail momentarily.

Here at UK Anime we don’t often comment about on-disc or packaged extras, mainly because they are such a rarity for anime released on these shores - often you’re lucky to find a clean opening and ending or a few trailers included on the disc. In those rare cases where you do get extras you often have to pay through the nose for collector's editions; such as Anime Limited’s recent Gurren Lagann Ultimate Edition, which sports an eye-watering SRP of £149.99. That, thankfully, is not the case here. Time of EVE: The Movie Deluxe Edition is both reasonably priced and overflowing with extras, both of the on-disc and physical variety. Perhaps the headline extras are the director’s two previous short films: Pale Cocoon and Aquatic Language. Both are excellent shorts, well worth watching, and clearly inform his work on Time of EVE. There are also various interviews, documentaries and commentaries to be found, as well as an art gallery featuring full translations of some of the film’s incidental Japanese text. Then there are the physical goodies: The headline for this reviewer is the inclusion of the film’s 33 track soundtrack CD, an almost unheard of extra on UK anime releases. There’s also a bonus book included, which is 56 pages of interviews, sketches, illustrations, liner notes and even a short story. This is all contained in a nice little slipcase, which unlike many collectors editions roughly conforms to the standard Blu-ray packaging height. Something this reviewer and his shelf space very much appreciate.

The only question remaining now is: how does Time of EVE: The Movie compare to the original ONA - is it better or worse? The answer is both. Some aspects of the movie, particularly one of the big reveals, seems to happen a little quicker in the movie. This feels like it takes away some of the suspense, though as I’m already familiar with the story I can’t be sure if that’s not just because I already know what happens. On the other hand the movie adds some connective tissue between the stories of the ONA as well as some entirely new material which fleshes out the world of Time of EVE. This new material adds an extra layer of depth to the world, as well as providing hints of more stories yet to be told. On balance I suspect the movie likely provides a better first viewing experience, but perhaps it won’t feel quite that way for Time of EVE veterans.

To summarise then, Time of EVE: The Movie is a subtle and thoughtful modern science fiction masterpiece. It is arguably one of the best animated science fiction films of all time, and as such it’s a film that should be on the shelf of any fan of the science fiction genre, or any fan of intelligent and thought-provoking cinema outright for that matter. Time of EVE: The Movie Deluxe Edition is stuffed full of extras and is very reasonably priced considering what you get, which is extremely rare in the world of anime where you can easily pay over three figures for something with a fraction of the extras on offer here. So, with the release of this Deluxe Edition, there has never been a better time to ask: "Are you enjoying the Time of EVE?”

10
A masterpiece of modern science fiction; arguably one of the best animated science fiction films of all time and almost certainly one of the most thought provoking, wrapped up in a smart package which overflows with extras and oozes value for money.
LATEST REVIEWS
Girls' Last Tour