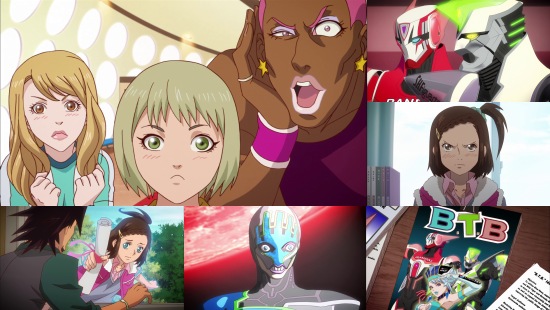 Tiger and Bunny has so far demonstrated that it is a series driven by its characters. Our Heroes are a mixture of troubled individuals, idealists, hopefuls and idols. They are normal people like you and me who have a past which sometimes comes backto bite us in the ass.

The second half of the series begins ten months after Jake and his Ouroboros colleagues were apprehended by Wild Tiger and Barnaby. It is said that fame changes people and unfortunately that is true. Since their victory, Wild Tiger and Barnaby have never been more popular. Top of the Hero TV league (well, Barnaby is at least), running daily commercials... yep, life is indeed good.

It doesn’t take an invisible thief to know that when you are at the top of your game, fate has a wicked way of turning things on their heads. When trying to apprehend said transparent individual Kotetsu, akaWild Tiger, discovers that his NEXT abilities have become even more “super” than normal. He is faster, stronger, harder, but he doesn’t last as long (insert your own joke here), and his already short stamina grows shorter by the day. On the advice of his old friend and manager, Kotetsu decides to call it a day and returns home to his daughter to reconsider his life. The only problem with returning home is Kaede, who, as much as she loves him, isn’t exactly Kotetsu’s biggest fan at the moment due to his abandoning her to live the high life in Sternbild. It’s rather difficult giving up your day job though, especially when you made a promise to your former wife that you wouldn’t. However, having your powers vanish on you as you are saving those most precious to you is a decisive factor here. Therefore, after helping Kaede, he announces his retirement to his family, and returns back to Sternbild to pack, although he isn't the only Hero having issues...

As we enter into the second half of the Tiger and Bunny series, the final story arc kicks off, leading us towards the end as Barnaby’s past history begins to unravel. The mystery surrounding his parents starts to bear fruit as he digs deeper, corroborating evidence and examining testimony for those who were present on that Christmas Eve. The facts don’t add up so someone must be lying and following a confession, Barnaby finds out that his lifelong mentor and guardian, Mr Maverick, owner of Hero TV, isn’t all that he seems - neither are his memories of the fire and the murder. In fact, none of the facts surrounding the death of his parents are adding up, and the memories of others are changing too as more facts emerge. What could be causing all this?

Part three of Tiger and Bunny falls into a bit of a story lull for the series as a whole. Part three acts as the link between the Ouroboros arcs in the first half of the series and the finale in part four, and while the episodes are perfectly fine and dandy the pace is a little slower than what we are used to. Out of the episodes in this set, the development of Kotetsu’s family and Kaede are the most rewarding. The insight into Kotetsu’s motiviation as a hero, why he would leave his family and more importantly his daughter with his parents. Although I do personally question why he values a singular promise to his dead wife over the ongoing welfare of his daughter, I can’t really fault his intentions. Kotetsu in the end is after the best for his daughter, and as starts to develop and grow things only get more complicated for the poor chap and his family. For those who thought puberty was a bitch, its nothing when compared to learning how to control super powers…

There is nothing different here to the quality of the previous sets with respect to the dub, the subtitles and the animation. As expected, all of these aspects are still flawless as per the previous instalments.  Also as before, the set is presented with two DVDs with three episodes apiece, and all six episodes on the Blu-Ray disc. The bonus features, limited as they are, are split between both discs.

Enough has been said of the quality of Tiger and Bunny, which has been maintained at a consistent level throughout the three parts to date. All this leaves us with is the need for an ending, which is promised in a fourth part which will hopefully provide a satisfactory resolution to the mystery around Barnaby’s parents.