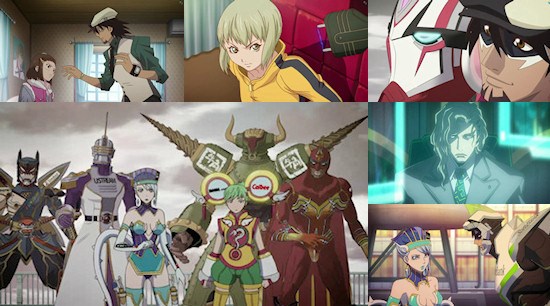 It's been rather a long time since we last discussed Tiger & Bunny upon these hallowed pages, back in the days of its early, formative episodes where we found ourselves cooing over its core concept and its formulaic yet fun premise that threw two divergent personalities into the midst of a story featuring comic book-esque heroes, villains and a sprinkling of humour drama.  Essentially, and to front-load this review with some good news, none of those facts change over the entire remainder of Tiger & Bunny - indeed, we can say with absolute confidence that this is a positive thing.

Having introduced our bungling yet lovable protagonist Kotetsu (aka Wild Tiger in his hero form) and his new partner in crime-fighting, the serious and slightly troubled Barnaby (who is so self-righteous he doesn't believe he even needs a hero alter-ego), and furthermore having established that these two characters are absolute chalk and cheese in personality terms, the first half of the series slowly begins to build itself around one major plot point - the death of Barnaby's parents and his efforts to avenge them at any cost.  While this prospect simmers and bubbles nicely throughout, the series also finds time to explore some of the other heroes and their lives, worries and shortcomings, while also introducing other elements which threaten to throw a spanner into the works at any moment.  The most obvious of these comes in the form of Lunatic, a super-powered "NEXT" himself who has pronounced himself as some kind of ultimate arbiter of justice; justice which he deals out with deadly efficiency, like some kind of Light Yagami in spandex, even if his appearances become increasingly limited to that of a deus ex machina of sorts as the series progresses.

That aside, Tiger & Bunny's first major story arc culminates in the appearance of an organisation apparently connected to the death of Barnaby's parents, and one decidedly vicious individual in particular who becomes the focus of its grand climax as both our heroes and the city of Stern Bild find themselves under threat.  It probably isn't too much of a spoiler to say that our heroes save the day on this occasion, but although this appears to bring closure to Barnaby's thirst for vengeance it proves to be anything but, as the second half of the series sees a thawing (and outright warming) in the relationship between Kotetsu and Barnaby turned on its head as our strait-laced hero finds himself thrown into a rabbit hole deeper than he could possibly imagine while his colleague finds himself faced with some difficult decisions of his own.

In truth, all of the storylines on show within the series whether minor or major feel like the kind of thing you've seen both in anime and other media a thousand times before - there's certainly nothing which you could explicitly label as "original" within the series as a whole.  Normally, this would be the kind of statement we'd make as a pre-cursor to some serious criticism of a show, yet somehow in Tiger & Bunny's case it gets away with it entirely.  In short, here is a series which succeeds in becoming more than the sum of its component parts - its characters are predictable yet no less lovable for it, its CG is often clunky despite improving over the course of the series, and its stories feel almost universally like recycled ideas from series gone past, yet they're no less compelling or fascinating because of it.

It's perhaps the characters that really make this series as a whole tick - Kotetsu is a wonderful blend of comedy clown, doting dad and staunch hero of justice, which plays perfectly against the serious nature of partner Barnaby, backed up by a variety of fellow heroes who all bring a certain something to the show as it plays out.  Never mind highbrow discussion of deeper meanings and social commentary - even the marketing-led gimmick of plastering the heroes in advertising is just that, a gimmick - Tiger & Bunny sets out solely to entertain, and it does just that with aplomb as it thrills, grips and moves us to a far greater extent than it has any right to.

Effectively then, Tiger & Bunny is a bit of a modern marvel that succeeds as a simple but devastatingly effective construct that impresses in streaming form as well as being a definite addition to our 2012 "must buy" list given Kaze UK's confirmation that it will receive a physical release on our shores.  Whether this little gem can succeed in becoming the anime series that breaks out into a mainstream following as some have predicted remains to be seen, but even if it remains merely a much-loved corner of our little otakusphere, it's likely to remain a fun and broadly light-hearted classic of its era for some time.

You can currently watch Tiger & Bunny in streaming form via Anime on Demand.

8
A marvellously fun slice of entertainment, that somehow succeeds in becoming greater than the sum of its component parts.
LATEST REVIEWS
Girls' Last Tour