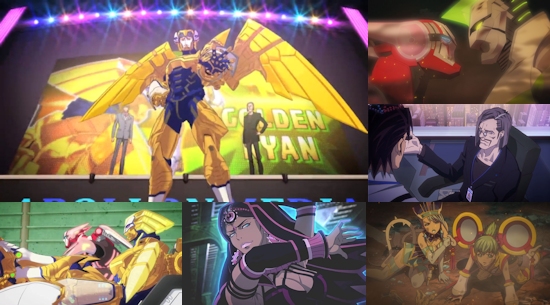 If The Beginning was merely a starter to Tiger & Bunny's journey to the big screen (and this it very much was, enjoyable though that film is) then The Rising always promised to be its main course, featuring an all-new story and even a new hero making a prominent appearance on the film's promotional posters. Thankfully, the BFI's latest Anime Weekend provided us with a perfect opportunity to tuck into the film as they hosted its European premiere in London. Be warned, however, that as this film takes place after the TV series, we'll be sprinkling in some spoilers from said TV show from the off.

Following the revelations regarding Maverick and his nefarious schemes within the TV series, the Apollon Media corporation which he helmed is understandably now operating in drastically reduced circumstances - so much so that our titular pair of crime-fighting, NEXT-powered heroes are now operating in the equivalent of Hero TV's second division, finding themselves surrounded by some less than competent allies as a result. All of this is about to change however, as Apollon Media introduces a new man at the top named Schneider; a man renowned for rebuilding failing companies into hugely profitable enterprises.

To that end, one of Schneider's first decisions is to do whatever it takes for the company's heroes to make it back into the big league of televised crime-fighting, re-establishing their heavily sponsored hero duo as a force to be reckoned with. This is, however, not the duo anyone is expecting, with the ageing Kotetsu "Wild Tiger" Kaburagi replaced by a younger model in the form of Ryan "Golden Ryan" Goldsmith, a man with the ability to increase gravity and an attitude to match this power to bring anyone to their knees.

With Hero TV's Second League also quickly disbanded, our titular Tiger is left unemployed, grudgingly taking on a job as a taxi driver to make ends meet and watching on while a new threat begins to terrorise Sternbild - a threat borne from a legend which describes the inception of the city itself. With his powers waning, Kotetsu has convinced himself that the time is right to step away from saving lives and fighting for justice... but is it really what he wants?

As described by the film's director, The Rising is the story of the main cast of characters within the series coming to terms with themselves - who they are, and what they desire. This is most explicitly used in the case of Fire Emblem - a character used as little more than comic relief in the series up to this point, before The Rising throws him into the melting pot to confront his demons and insecurities at close-quarters. It's an incredibly well-handled dive into the back story of this individual that is played out sensitively and comes to a touching climax that adds some real heart to the film.

Away from this, where The Rising really ups the ante is in terms of its action scenes, with the film providing some spectacular set pieces throughout. This is particularly true of the scenes which bookend the film - the movie starts with a wonderfully fluid re-introduction to the main cast and their abilities, whilst the climactic battle is a blur of fast cuts and high-octane action that focuses around Tiger and Barnaby themselves but doesn't forget to allow the rest of the cast in on the fun.

In fact, The Rising feels like the first time that Tiger & Bunny has really managed to master its already potent formula completely - the TV series made great use of its characters but struggled to keep pace with the excitement of its opening episode, while The Beginning did little with its characters but provided a good visual spectacle. Set against these previous efforts, The Rising is the complete package - its humour is well-placed and served up confidently in just the right doses, its character drama is heart-felt and touching, and its action and story wouldn't feel out of place in a Hollywood superhero movie. The film is even confident enough to throw a couple of reasonably large twists into its narrative, neither of which are completely shocking or out of leftfield, but they do add a certain extra frisson to proceedings.

The only real disappointment here is the use of Lunatic in the film - having built him up as not so much the nemesis of the heroes but another facet of the justice that they seek, the poor chap is once again used in only a bit-part role that renders him utterly superfluous in the grand scheme of things. It's a massive waste of a promising character who finds himself overlooked once again. Thankfully newcomer Golden Ryan is used far more smartly, becoming a lovable narcissist by the time the movie ends.

Visually, The Rising can't really boast a place as a stunning work of animation, and its use of CG remains problematic at times, but for the most part it's effective and those aforementioned action scenes rightly eat up the animation budget to more than make up for any disappointment felt elsewhere. The film also makes a good argument for being watched in a cinema or home with a powerful sound system - there's a deliberately oppressive use of bass throughout the film to match some of the powers being used on-screen, and coupled with an atmospheric audio track and passionate voice acting from its Japanese cast all of this adds to the immersive abilities of the movie. When you completely forget that you've been reading on-screen subtitles for over ninety minutes, you know that a film has done its job right in terms of engaging the viewer.

The hope of many when Tiger & Bunny was first announced was that it would be anime's answer to America's classic superhero franchises at a time when they're dominating the box office - with The Rising, we finally have a Tiger & Bunny film to match the best Marvel Studios can offer. If you enjoyed the heavily character-driven aspects of the TV series or its more thoughtful turns then this shift towards aping a Hollywood blockbuster might disappoint you, but in pure entertainment terms it's an impressive feat that has left us hungry for more from the world of Tiger & Bunny, even if we won't be seeing it appear in animated form any time soon.

Tiger & Bunny: The Rising's European premiere took place as part of the BFI Anime Weekend.  The film has been licensed for a future home video release in the UK by Anime Limited