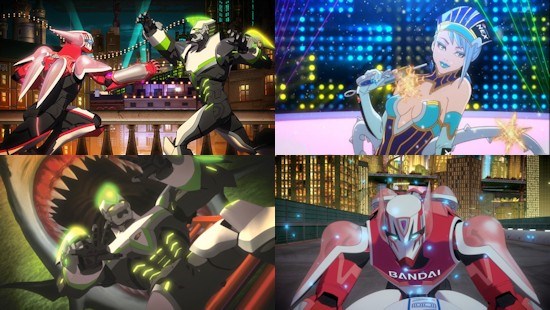 The superheroes of Sternbild are back, and this time they've brought new sponsors!  After the critical and commercial success of its animated TV outing (and very justified that success was too in our opinion), Sunrise's tale of mutant heroes in an unashamedly corporate world returns for the first of two theatrical outings - as luck would have it, we got to catch this movie on the same weekend that it opened in Japanese theatres courtesy of a screening at London's BFI Southbank.

Effectively, Tiger & Bunny: The Beginning can be split neatly into two halves - perfect for a lazy anime reviewer with a deadline to keep!  Anyone who has watched the early episodes of the TV series will immediately recognise the first half of the film, taking in as it does the first two episodes of the show as it introduces us to the city of Sternbild - a city rife with crime, but with plenty of talented heroes ready to make those criminals pay for their deeds.  These heroes are no vigilantes, nor as they simply justice-loving oddities; instead they're fully paid-up professional superstars, complete with corporate sponsorship deals and TV cameras to keep happy at every turn, even if that means delaying a pivotal moment in their crime-fighting activities to cut to a commercial break.

More specifically, our focus is on Kotetsu Kaburagi (of the hero moniker "Wild Tiger"), an ageing hero whose life of crime-fighting has seen better days. This point is hammered home when an escalating criminal escape is thwarted by an unknown young hero who appears out of the blue before introducing himself not under a pseudonym while hiding behind a costume but with his real name - Barnaby Brooks.  With Kotetsu's management company going out of business, Wild Tiger finds himself the property of Barnaby's backer - Apollon Media, who are looking to blaze new trails by creating the first ever two-man team of heroes.

After a couple of somewhat abortive missions which showcase both the best and worst of Wild Tiger and Barnaby, we move on to the second half of the film and an all-new caper which slots neatly between episodes two and three of the TV series while introducing a new adventure (and a new villain) for Sternbild's heroes to get to grips with - something which proves to be incredibly difficult thanks to the particular "NEXT" power of this slippery antagonist.

Let's start with the positives of this movie... in fact, let's zoom in and focus on the most important positive of all first - Tiger & Bunny: The Beginning is a hugely entertaining movie.  It's quite clear from the outset that having fun with its scenario and characters in the name of impressing the audience is the film's primary purpose (as it should be), and it achieves this with aplomb - the movie is a riot of comedy throughout, and it also manages to make its various action and chase sequences compelling to view between its depiction through the lens of the "Hero TV" television show intermingled with actually spending some time on the ground (or in the air) with the heroes themselves as they get involved in the thick of whatever is transpiring.

What's more, this film seems to have correctly pinpointed areas that might have left fans disappointed while watching the TV series - thus, characters who were given short shrift the first time around such as Rock Bison and Dragon Kid are given far more time to shine on-screen here, even if none of them can ever hope to eclipse the main course of the series, that being the relationship between Kotetsu and Barnaby.  Thankfully, this odd couple are deserving of their time on-screen, as their dynamic works well in terms of both comedy and character development.

Visually, the film does stand-up job of depicting and delivering its world - there are still moments of clumsy CG or animation that feels a little "off" in a jarring way, but those occasions are few and far between and as a whole the production quality is certainly a big improvement over the relevant early episodes of the Tiger & Bunny TV series to the point where it's impressive just how much work has been done with scenes that could so easily have been lazily recycled from the original material.

However, I do have to offset all this gushing praise for the film's entertainment value with a few counter points.  For starters, newcomers to the Tiger & Bunny franchise should be warned that this film isn't necessarily the best starting point for them - there's still fun to be had from watching The Beginning, certainly, but you'll end up missing out on a lot of in-jokes and references if you've never seen the TV series before.  This situation will also leave you with a few hefty questions in your mind come the end of the film no doubt, as some characters and plot points such as Lunatic's appearance and the story of Barnaby's parents are left in the film even though they have little or nothing to do with the plot of the movie itself - an odd choice, although perhaps one aimed at coaxing new viewers into checking out the TV show.

The extra attention afforded some characters is similarly offset by another big negative, that being Blue Rose's portrayal in the film.  Having grown throughout the original TV series into a strong character via plenty of development of her personality, it's more than a shame to see her reduced to nothing more than eye candy in this movie - quite simply, she only exists in this film to provide fan service via her skimpy outfit and a decidedly uncomfortable riding position on her vehicle of choice.  It's a real waste of a character, and she arguably isn't the only one given a rough ride by the film - perhaps thanks to its short running time, there's little attempt made to show any of the heroes doing their job well, and thus they all end up looking like buffoons who are prone to slapstick, negating any feelings that they're bona fide heroes protecting their city and its people that the original series managed to depict.

Still, for all of the holes I can pick (and have just picked) in this movie, there's really no denying its entertainment value - it almost feels nostalgic in the way it harkens back to the days where superheroes didn't have to be "dark" and serious, instead presenting us with lovable but flawed (and occasionally dumb) characters in a riot of colour, action and slapstick screw-ups.  That all of this is delivered with almost perfect pace and timing and nary a moment of its running time wasted only serves to accentuate what the film does well - giving its audience a rollercoaster ride filled with laughs and moments of mirth, but with just enough hints of threat to remind people of the wider story behind what it presents on-screen.

For existing fans of Tiger & Bunny, The Beginning ticks all of the right boxes to the point where it's almost a love letter to that fandom, delivered with a knowing wink that goes some way to papering over the problems inherent in the film.  Newcomers can still enjoy the movie for what it is, but be aware that you aren't getting the full picture - the more of the original series you've watched, the more moments of otherwise unnoticed comedy will be yours to enjoy.

Tiger & Bunny: The Beginning was screened at the BFI Southbank in London

7
It feels like a film created for existing fans rather than newcomers to its world, but either way The Beginning is hugely entertaining despite some obvious flaws.
LATEST REVIEWS
Girls' Last Tour