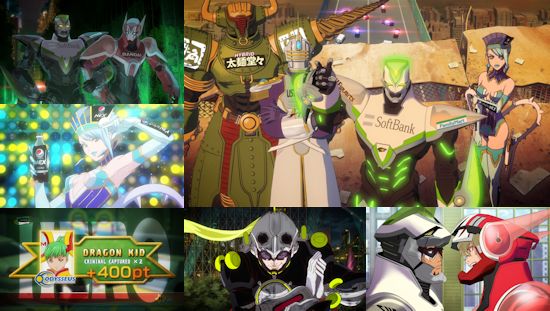 Although it seemed like a great white hope when it came to bringing interest in anime back to the mainstream Tiger & Bunny has, for whatever reason, not captured the imagination of those outside of existing fans of the medium as we might have expected - TV executives haven't shown an interest in bringing it to broadcast media even where slots for anime exist in the US, and physical sales of the original series haven't made quite the splash we might have assumed it would.

However, all of this is irrelevant for the discussion at hand, that being the quality of the show and its story-telling which was undoubtedly excellent and decidedly entertaining, paving the way for us to eagerly anticipate this physical release of the first of two Tiger & Bunny movies.  The Beginning may not entirely be an original movie, but we certainly won't say no to more from this superhero-infused franchise, so is this film worth the wait?

The good news for anyone who hasn't yet delved into the city of Sternbild is that the first half of The Beginning takes us right back to the very start of the series as it introduces its concept in the same breathless cavalcade of action and character introductions as the first episode of the TV show.  This ensures that we're quickly brought up to speed with the core concept of Tiger & Bunny - a city occupied by a variety of superheroes borne from genetic mutations known as NEXT, who not only protect the city that they love from crime but also work for corporate entities as they compete against one another as part of Hero TV, a much-loved television reality show of sorts that covers their adventures in the name of entertainment like some kind of sport.

The television framing of this introduction makes for a perfect start to the film, giving it plenty of natural devices to play with to keep the action coming while easily introducing both characters and concept.  From here, our focus moves to our titular main characters - Kotetsu "Wild Tiger" Kaburagi and Barnaby "Bunny" Brooks, who find themselves becoming unlikely (and frankly uncomfortable) work colleagues as Hero TV's first ever crime-busting duo.  Not that this pairing does much busting of crime when they find themselves spending most of their time arguing or tripping over one another thanks to their wildly divergent personalities.

In short then, the first half of The Beginning covers the opening episodes of the TV series (with some added scenes here and there) before moving onto pastures new for its second half thanks to a crime involving the brazen theft of the Statue of Justice from its supposedly secure location within Sternbild.  If catching a robber sounds like simplicity itself for our superhero NEXT then think again, as the culprit is not someone to be underestimated - cue what effectively feels like a visually colourful and fun elongated TV episode as the heroes of Sternbild race to stop this notorious criminal before he can make good on his escape.

This blend of footage from the TV series and a new story makes reviewing The Beginning a tough assignment to tackle - those who have watched the TV series will quite rightly contest that they've seen it all before for the duration of the film's first half, while those who haven't seen the original show will lose out on the importance on some of the references made to Barnaby's past and goals in particular.

Thankfully those early episodes of the series were a hugely entertaining introduction to Tiger & Bunny, so seeing them again with some extra polish and added scenes isn't such a bad thing whether you're an existing fan of the show or a newcomer, and although the film's new story doesn't live up to the tempo or sense of excitement that its first ten minutes bring it's a welcome return for the show's characters and a good use of its premise for the most part.

Bringing Tiger & Bunny to the big screen means that the Blu-Ray release we reviewed here holds two advantages over the show's TV series - aspects of its soundtrack and audio make good use of the availability of a multi-channel surround track, while the show's visuals get some suitable beefing up to match its theatrical treatment.  Admittedly some of the more detailed visual moments are a little crass - Blue Rose's character is used throughout the film as nothing more than the subject of a lingering male gaze, which is an utter waste of her as an individual - but the improved CG for our titular hero's outfits is most welcome.  As a whole then, the film looks good for the most part, and will be more than satisfying to fans of the series courtesy of a physical release that certainly does it justice.

Indeed, this release from Anime Limited also contains a satisfying amount of extras, including substantial footage from the film's Japanese world premiere together with a large number of previews, trailers and the like.  It's good to see releases of recent anime movies getting comprehensive packages of bonus materials, and this is another release to add to that list.

Tiger & Bunny: The Beginning might not have the majesty of the TV series in its pomp, but that's simply a product of its nature - it doesn't have the time or luxury of multiple episodes to build up a story, so instead the film focuses on establishing its story for newcomers (which it does pretty well) before providing a new story that taps into the entertainment value of its setting in a satisfying manner for fans both new and old.  Long-standing fans may be more interested in the potential inherent within the second Tiger & Bunny film, The Rising, but until we get our hands on that this is an enjoyable and accomplished addition to this fascinating universe.

7
An entertaining mix of recap and fresh material, there's something here for both existing fans and newcomers alike.
COMMENT AND DISCUSS
blog comments powered by Disqus