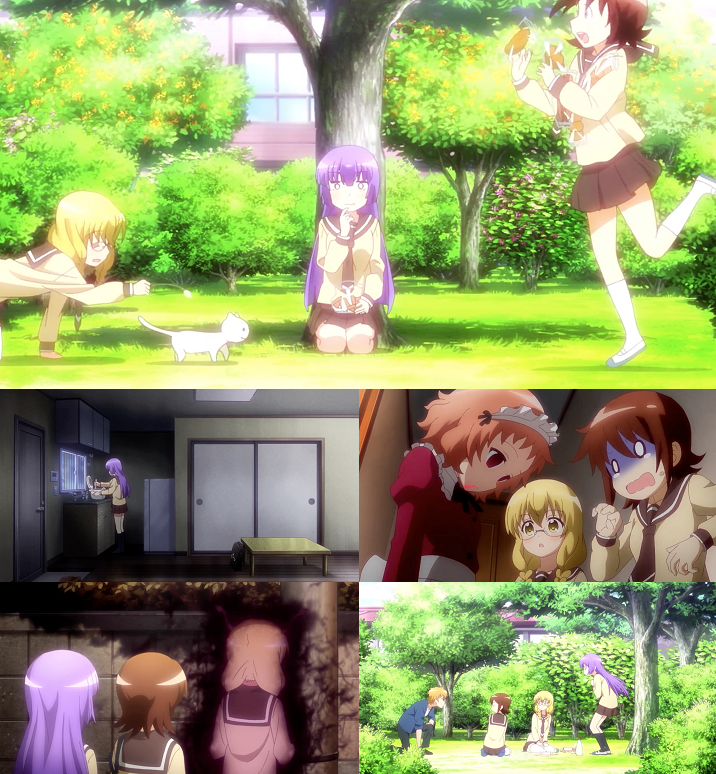 After a clash of events, three girls with seemingly mismatched personalities meet in their schoolyard. The title of the series isn’t describing the different hair colours of the three main characters – each girl has the kanji for ‘leaf’ in their name. Therefore it seems destined for the girls to become inseparable friends, which is exactly what Three Leaves, Three Colors is about.

There is Futuba Otagiri, an energetic, food-loving girl who rushes from the cafeteria back to her classroom in order to consume the copious amount of food in time before afternoon classes start. The cat-crazy class president, Teru Hayama, is also rushing through the schoolyard chasing a cat. When Teru and Futuba bump in to each other, they find Youko Nishiwa eating lunch all by herself. Futuba and Teru have lunch with Youko, who is very distant at first. By the way she talks, Youko is quickly revealed as a ‘rich girl’ who, after her parents lost their fortune, now has to get used to a common life. So far, she hasn’t had much luck – she has trouble fitting in at school and hasn’t made any friends. Although no agreements are made, the girls meet at the same spot again the next day to all have lunch together. From then on, a friendship blossoms between the trio.

Three Leaves, Three Colors focuses mainly on Youko adjusting to a now extremely poor lifestyle in these early episodes. With Futuba and Teru advising and supporting along the way, she starts learning simple things such as cooking and eventually even finds a job. Despite the series' opportunity to exploit Youko’s situation for laughs, it remains rather realistic. Instead of a spoiled princess unwilling to adjust, we see Youko really trying and changing like a real person would. She fawns over how cheap food can be and tries her hand at cooking, taking a firm lead of her new lifestyle rather than falling in a victim role. Teru is revealed to not be the token perfect class-president either – she actually has quite a dark side, giving her character more depth as well. Futuba, described as a ‘black hole’ for the amount of food she can devour, is a great support to Youko with her ever energetic and positive attitude.

With a main cast that is fairly normal, the supporting characters are all the more wacky. Teru has a sister with extremely good luck, as well as her personal rival. Youko has her former butler Yamaji popping up everywhere she goes (Futuba even calls him out as a stalker). Youko’s former maid Sonobe, now owning a bakery, is the most peculiar character of all; she still wears her maid outfit, only changing clothes once when she decides to dress up as a schoolgirl to promote her bakery at the girls school. The main cast combined with crazy characters from Youko’s former lifestyle creates an entertaining mix that, after a bit of a slow start, gives the series the boosts it needs.

As for animation, Three Leaves, Three Colours is as vibrant and colourful as its characters. Its beautifully bright and lively, befitting the story and colourful cast very well. Despite the first episode not being hugely interesting, mainly focussing on the girls having lunch together whilst unknowingly being watched by Yamaji, the outstanding animation invites viewers to come back for more. If you do stick around, you’ll soon discover a storyline just as entertaining as the animation. Each character has potential for development along with an interesting back story; something we’ll hopefully see much more of as the series progresses.

You can currently watch Three Leaves, Three Colors in streaming form on FunimationNow.

7
A series that is equally vibrant in terms of story and animation.
COMMENT AND DISCUSS
blog comments powered by Disqus