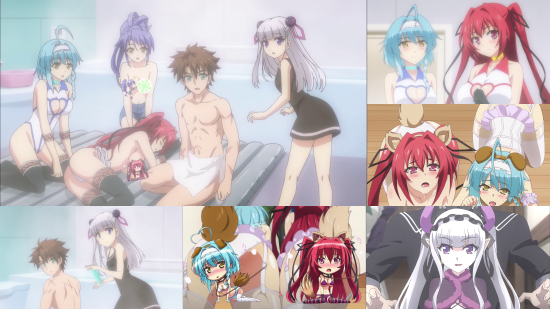 So here we are, the continuation of the demonic fantasy that is The Testament of Sister New Devil, except now it’s called BURST, rather than Series 2. You have to love anime naming schemes. SisTest Series 2 continues where we left off, albeit with some missing material in between series that is open to those willing to shell out for the as yet unreleased blurays (and from the screen shots released by some sites it seems that our good friend Basara finally does what all those wussy harem men before him couldn’t.) Does SisTest continue on its succubus induced incestuous trends, or does the series mature and turn into a proper romantic story.

Fat chance of that happening.

No, SisTest and all its fanservice heavy, perverted and twisted tendencies continue unabated, except now the gloves are off. Oh yes, the scenes in the first series will be beaten by Basara’s unwielding fingers of fury as he discharges his right to extinguish the sadistic lust of the succubus’s curses. Except now it’s not just Mio, it’s not just Yuki, now all manner of gods, sisters, parents, teachers and lecherous demons are taking the plunge to experience the bounty that is… Basara Toujou.

I wish I was exaggerating.

Actually, because all the introductions have been over and done with in the first series, what we are treated to in SisTest Burst is an actual plot from the first episode. At the end of the first series, Basara’s father was seen in the demon realm. In the usual secretive way, this was a last minute reveal to act as a rather pathetic cliff-hanger. It was obvious from the start that his dad was a bit of an odd character, why else would he try and pair up his son with the heir to the Demon king’s power, Mio? But the first time we see him again, he is fighting one of the demons seeking to take the throne vacated by Mio’s father, and winning. He even finds time to rescue a falling damsel in distress, like a member of the Hero clan should, after his own magic destroys part of the castle tower that was imprisoning her. Its obvious something is going down in the demon realm, power struggles, warring factions and it is only a matter of time before Basara and his demonic servants Yuki and Mio get involved.

So while his father is hard at work, Basara is having a hell of a time at school and home, educating his servants and their sisters in the perverted acts, and being lead along by his bombshell of a teacher, Hasagawa. She is a rather special one, it seems that she has the ability to make everyone like her, or so says the school janitor. Odd how he noticed and didn’t get affected by her spells? It turns out that she is trying to dominate the school (just the school, not the world) to release the power that Basara has inside of him. He finds himself the regular target of attacks until he finally confronts her, and finds out that she is a goddess, the janitor is an evil god, and actually the secret power inside of Basara is actually the powers of the original Valkyrie, Brunhilde, or the war god. Depends who you see talking about it, it seems.

What the hell is actually going on?

Thankfully the series quickly shies away from this nonsensical story and dives back into the conflicts in the demonic realm. Ah yes, all-out war is going on and, through the medium that is Maria’s strict older sister, who isn’t a lolita character unlike Maria’s mother, Mio is to return back to the realm to meet with the potential usurpers to her father’s throne, and some of them might want to also take her powers from her, at least they try, but then Mio has the joy of going full walrus once she sees Basara hurt.

And in between these exciting plot twists, and cavernous plot-lines, is the fan service and the need for Basara to regularly keep a check on the succubi curse on his servants, and the attempts by the girls to boost their power by becoming closer to their master. Their methods are somewhat, super effective, and may involve butt plugs, tails and dog-ears. Oh, and expect the little servant harem to grow, a lot.

Yup, someone in Japan realised I was watching the show, and decided to make SisTest Burst even more relevant to my interests. Bugger.

To put it bluntly, SisTest Burst is more of the same, except ramped up to 11. The action is bigger. The demonic battles are more extreme, and the fan service and sex, is more lewd than before. The name Burst is apt, because that’s what you’ll do should the blurays ever get released in the West.

6
Get ready to burst because this is SisTest levelled up!
COMMENT AND DISCUSS
blog comments powered by Disqus