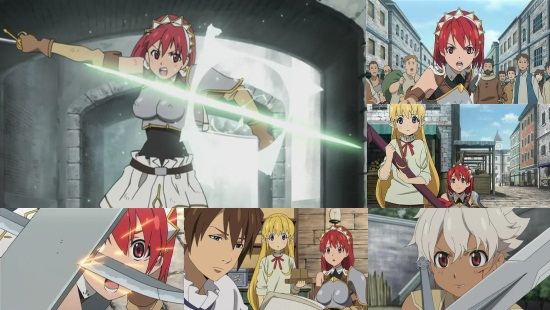 It seemed like such a simple request - Cecily Cambell (yes, this is how it's spelt in the anime - it bugged me too!), descendant of a distinguished family of knights and defenders of the merchant city of Housman, seeks the sword-making services of the reclusive Luke, whose crafting abilities are matched only by his skill with a sword...  The only problem is that Luke won't make one for Cecily.

The Sacred Blacksmith, based upon an on-going series of light novels by Isao Miura which is already receiving a manga adaptation in Japan, now forges it way to the west via FUNimation who, in their kindness, have allowed UK fans to view it via their YouTube page.  The twelve part series introduces us to a world which has come out of a destructive war that saw the use of Demon Contracts, an act which grants humans incredible powers and destructive weapons known as Demon Swords at the cost of their own bodies and sanity. However, despite the now peaceful nations agreeing to ban their use, the effects and remnants of the Demon Contracts still haunt the land, their repercussions all too obvious.  All the while, the schemes of a dark figure threaten to reignite the wars that so nearly destroyed the world - but do Cecily and Luke have what it takes to stop them?

One thing that's surprising about this series is that rather than taking the easy route of jamming in fan service to keep the closet perv/admirer of the female form happy, it instead treats its female leads as (shock, horror!) intelligent individuals.  What fan service there is isn't thrust into your face every other frame - indeed, at times its surprisingly absent, thus allowing you to at least enjoy the excellent and well executed scripts, the beautifully painted background art, the neatly scripted and choreographed fight scenes and the well-rendered monsters.

The core cast members of Cecily and Luke are joined by Lisa, the child-like elfin assistant whose powers enable Luke to earn his title of sacred blacksmith. Then there's Aria, whose “abilities” mean the difference between life and death for Cecily. The leads themselves have their own unique and believable personalities, with the determined, albeit over-confident, Cecily easily countered by Luke's cold aloofness.  In fact there's only one real complaint I can muster about this series and that is, like many other anime series adapted from books or manga, that at twelve episodes for the entire series it still leaves the impression that there is more to follow despite resolving most of the relevant plot points.  This might not be a problem if you're reading the light novel or manga in Japan, but it's a little frustrating for the rest of us.

If you're after a fantasy series with plenty of substance, or something that won't drag its plot out for too long, then The Sacred Blacksmith should be a definite target for your next visit to YouTube, and a definite must purchase if it ever finds its way to the UK on DVD.

The Sacred Blacksmith can currently be viewed in streaming form on the FUNimation YouTube channel.

9
While it's not going to give Haruhi a run for her money, this is nonetheless an entertaining and exciting series in its own right.
COMMENT AND DISCUSS
blog comments powered by Disqus