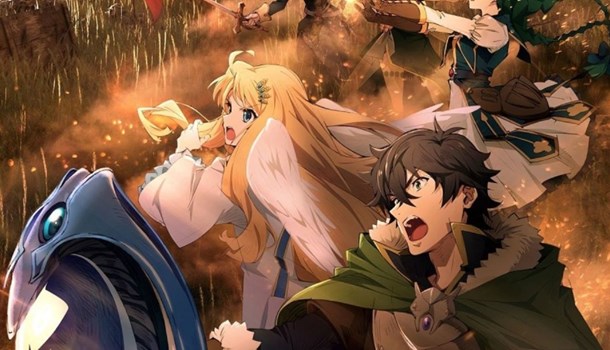 In my memory but perhaps not in reality, my first piece ever to go live on UKA was about Shield Hero, my review ended up so detailed our Esteemed Editor put it up as an article. This was not something I objected to, because to me The Rising of the Shield Hero season one was a remarkable event. I felt you could write a dissertation on it, a whole damn book of appreciation and though clearly part of a bigger story (and yes, is based on a series of light novels) it stood alone as a piece of narrative storytelling and character development. Long before the second season aired I’d watched the first season five times because I felt it was that good and wanted to return to it.

I likened Shield Hero in the article to The Matrix (at least I remember I did) in how it intrinsically needed to be no more than it was even though a part of a wider story. It stood alone even if leaving me wanting more. Of course, The Matrix then had two (I'm ignoring the most recent one) ropey if sometimes fun sequels, but it’s not unfair to say they failed to match the first film; and perhaps this comparison in completeness and openness of narrative left me concerned that season 2 of Sheld Hero might not live up to its predecessor. Maybe. I am prone to overthinking things so that would hardly be a surprise.

Add to that I can never quite throw off my irrational mental block with streaming, and as I was waiting for the season to end to blitz it, and finally because I am lazy, despite my overwhelming positive reaction to the first season of The Rising of the Shield Hero, my return to Melromarc (or so I assumed) took many months more than planned.

Anyway, what did the second season have in store for me?

The Shield Hero, Naofumi, is called to council. A new threat to Melromarc, nay, to the wider world is present, the Spirit Tortoise, which is causing nations to fall. Will our cardinal heroes rise to the challenge? Well, our Shield Hero will, but not his fellow heroes, this is not their remit, it’s not one of the waves of destruction that they were conjured from their homes into hero form to fight, so they flounce out thank you very much... but what is the Spirit Tortoise, what is its relation to the waves, and could more be going on here than meets the imagination?

The story then takes innumerable turns, splitting into roughly two parts (plus a frankly bewildering final thirteenth episode), that takes us into the other world that L’Arc, Therese and Glass, those heroes-cum-enemies originate from. As a series it’s a total mixed bag and my reference to The Matrix really does hold because it’s hard to hide my relative disappointment with the series. Not that it’s bad it’s just not as good as what went before and perhaps suffers from the problem of being a connecting series, one that bridges and advances elements of the story, that introduces new characters, develops those we know, but never quite works as a standalone piece of storytelling. It also has some unfortunately weaker elements to it. One of these is exceedingly important in how detrimental it is to the season, the other I’ve alluded to, and is a curious misstep.

Let me take the misstep first if only to get it out of my system: the final episode. It’s like an OVA and even has moments akin to the "let’s go to the hot springs" beach fan service episode. This is fine on a disc where you can accept it as outside the main narrative, but instead it tells a few stories that intertwine with what happens throughout the second season and shows a little of our characters in present time. Basically, it is utterly throwaway and tonally out of touch in a dark fantasy series. Whether this is the impact of a change of director from season one I don’t know, and though it’s not terrible it’s guilty of adding net zero to the show. Maybe after covid someone wanted to have some fun? Who knows. They should have done it elsewhere.

The other is a biggie, and it is the inclusion of a new villain in the shape of Kyo, another victim of being shifted from Japan to a new world. From their first moment on screen, Kyo set my hackles up, I gritted my teeth and cursed his very existence. Kyo is the worst kind of anime villain. Belatedly the series attempts to draw comparison with him being some darker version of Naofumi, and creates some vague rationale why he is somehow some an omnisciently powerful enemy, but in the rare moments of his screen time, all he does is cackle like a loon, declare his brilliance, and somehow have people believe in what he says when he’s clearly just a raving nutjob evil baddie. Compare this to the first season where there are the ambivalent threats of the waves, the friends-cum-enemies, the hatred of the ruling classes against the Shield Hero... Comparatively Kyo is the laziest of all tropes and utterly unworthy of entering the Shield Hero universe. It also undermines elements of the narrative, as you cannot imagine Kyo ever convincing anyone that he has a good heart or plotting anything except lunatic violence, especially young Yomogi who seems impassioned by Kyo’s apparently honest intentions to want to give up her life... possibly. It just doesn’t work.

Sorry but Kyo is an utter travesty. Yes, there is an attempt to suggest Kyo is what Naofumi could become if he treads the wrong path, but Kyo just exists to be a sadistic villain to try and piss off Naofumi. 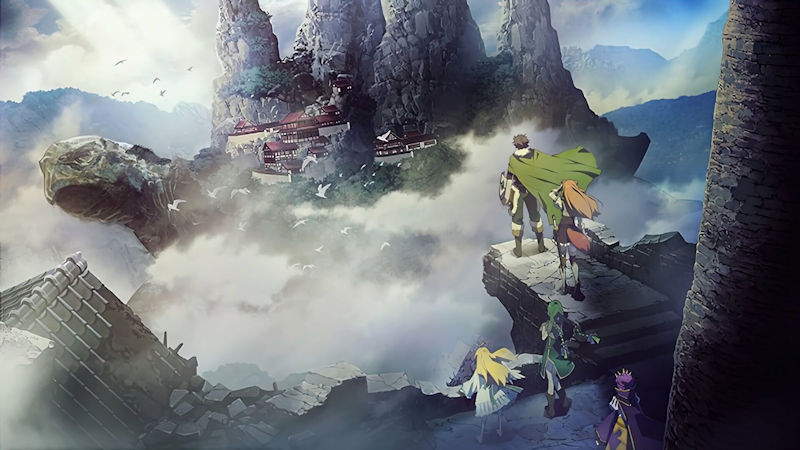 Thankfully Kyo is used sparingly, but when he is in the story, I honestly wanted him to just fuck right off and die.

I don’t mean this as a downer, but to reflect my disappointment at how the lazy representation of character in narrative can be harmful to the overall impact.

It’s a real shame too, because the rest of the season often does a really strong job when it comes to building upon the narrative and to move our characters forward. As the series unfolds, as Naofumi enters the world of L’Arc and his friends you can sense how pieces are starting to fall into place for a longer narrative that is both dark and intriguing. True, the season cannot always mine the most dramatic moments as strongly as it could, but I think that is more an issue with Kyo’s tedious presence, affecting dramatic moments where he exists like a pervasive and lingering bad smell. Whereas, when episodes really focus on the development of Naofumi from a character dominated by anger, and those where it deepens his affection for Filo and Raphtalia the series really comes alive. One such instance is how Naofumi has to confront his friend-cum-enemy situation with L'Arc and his party, who previously stated their desire to destroy his adopted world to save their own. Rishia, who Naofumi accepted into his party after the Bow Hero ejected her at the end of the first season, is given considerable prominence and character development, and shows how though she initially is a little bit of a stereotype, she is given space to develop into someone more interesting and narratively important.

The narrative strands start to expand out like tendrils, and often take us down surprising paths within the world where Melromarc sits, as not even the Spirit Tortiose is what it at first seems. And so as a connecting series it does a lot that really develops the story and does it well, so that despite the curiously pointless final episode, as we follow Naofumi’s exploits, whether finding himself in impossible prisons, as he loses his friends, regains them and find new ones. You recognise how the story is really building up towards a richer, deeper world, much like how Full Metal Alchemist: Brotherhood starts to bring people together towards a shared, yet individual set of goals, and here makes you question quite what is going on with the destructive threat of the waves, and if everything that we know about the worlds is what we think. Some moments are admittedly predictable, but only in the moment, such as Raphtalia’s sudden [spoiler alert redaction applied], where in the moment before it happens you guess it will but just five minutes before, you’d not for a moment think it would. There is that wing stretching of worlds and narrative that allow us to glimpse where the story may go, to recognise the complexities and perhaps the difficult choices to come. It is in these moments when the series really soars (and so makes me so rue the pestilential Kyo).

Also working under the surface is a series of parallels. Naofumi and Kyo, Naofumi’s party and L’Arc’s; the development of the different worlds is similar, their concerns and dangers not dissimilar. There is more worth fighting for than a single country or a single world. Characters often are humanised, even the apparently murderous Glass is brought to a more humane place by the introduction of Kizuna.

So, yes, I enjoyed most of the series but as an expansion of worldbuilding, of the narrative flexing into new areas and if I seem overly negative it is genuine frustration at the inclusion of lazy antagonists rather than the more sophisticated aspects of the first season. It may be a fault with having only thirteen episodes - with a bit more time they may have been able to finesse Kyo beyond being a mere boorish irritant.

So, do I want more? Absolutely, because I see Kyo as a blip who I hope never returns. Also, confession time. I watched the first episode some months before I finally settled down to watching the whole season.. why? Because the first episode tries to do too much. It tries to show almost every aspect of action and the skills Naofumi and his party have gained and throws the kitchen sink at the screen rather than recognising this is a narrative continuation and can be relaxed. We are returning viewers, returning for a singular narrative not an arc, we want a seamless narrative rather than go full wham bam; it’s like between director and writer they feel they have a point to make when they don’t. They simply need to subsume the need to impress by the need to allow artistry to create a fabric, a tapestry seen as a whole. Again, a bit of a niggle.

As I say, most of the series is greatly entertaining, but it’s solid rather than the stellar dramatic arc of the first season wherein the characters earn their stripes and redemption is justified. Everything here is just a little too easy at times. But I also really do think that judging the second season of Shield Hero – excepting Kyo – is in some ways a hiding to nothing because it seems to me it will stand or fall based on what comes next and despite some vociferous objections, I really am looking forward to more.

7
Building on the world of the first season, but with a tiresome villain that should be ejected to obscurity
LATEST REVIEWS