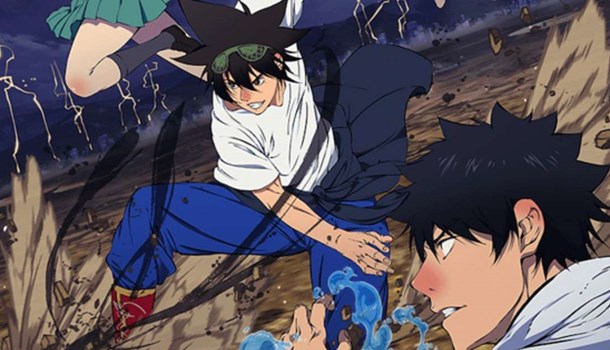 The God of High School is an anime adaptation of a successful South Korean webtoon “The God of High School,” written and illustrated by Yongje Park. Author Park Yong-Je majored in cartoon animation at Sunchon National University. Inspired by the action genre and Dragon Ball in particular, Park made his debut with “Tough Guy” published on Naver Webtoon from 2008 to 2009. This manhwa, set around high-school brawlers from Park’s hometown of Suncheon, was well received and inspired him to pursue a “100% totally unrealistic work of action” where high schoolers from all over the world would compete to become the God of High School.

When half an island disappears from the face of earth, a mysterious organization sends out invitations for a tournament to every skilled fighter in the world. They state that, “if you win you can have anything you want.” They personally recruit only the best to fight and claim the title of The God of High School. This intrigues protagonist Jin Mori, and as he continues through the tournament, he meets many competitors each with a different style of fighting. Martial arts aside, participants fight by using “Borrowed Power,” a mystical energy granted by supernatural entities (gods, demons, mythical creatures…), hence the name Borrowed Power. During the opening rounds, Jin comes across two other martial arts prodigies: Full-Contact Karate expert Daewi Han and epeeist master Mira Yu. These two befriend Mori after their fights against him and are joined together as the Korean Team after the preliminary rounds. As these early rounds conclude and teams assemble, both competitors and hosts start to make their plans in order to achieve their various goals.

With GoH recently finishing it’s run on Crunchyroll, there is definitely plenty to say regarding this spectacular anime! Whilst this series is largely surrounded by violence and fighting, the art style and animation portrays the events extremely well. It is fantastic to be able to present such detailed and complex fights in the way this anime does - the excellent animation truly makes the anime very enjoyable. Furthermore, the design of the characters within GoH is very unique, I have personally never seen anything like it before!

The main protagonist, Jin Mori, is initially introduced to be arrogant and very carefree with a passion for fighting. Alongside Jin Mori, there are lots of other fascinating characters such as Han Daewi, Yu Mira and the many other contestants participating in this deadly competition. All characters however are immensely strong and seem to obtain their own power, otherwise known as “charyeok”, which ultimately inflates their already superhuman strength. For myself, I regard characters and their characteristics very important within the piece of work. GoH shows an adequate presentation of the “perfect character.” Jin Mori is portrayed as lighthearted and playful, however we also see the serious aspects of his character, especially when it comes to his friends. Due to his kind and hospitable personality traits, he develops strong bonds of loyalty, emotional attachment and genuine care with his friends. Furthermore, all the characters within this series have relevant and distinctive backstories which contribute to their identities and their motivation towards achieving the title of “The God of High School” and the prize that comes with it. Aside from the captivating fights, the characters of GoH were personally my favourite aspect of the anime as they provided tension relieving humour and allowed me, as a viewer, to establish an emotional connection.

As for the plot, I found the first few episodes to be quite slow and repetitive with no development into conflict. However, I found this opinion was instantly changed within the introduction of Nox. A mysterious organization whose main goal is world domination, Nox attempts to mislead the world into believing they are heroes. The villains create a refreshing and interesting plotline as they go about creating conflict and disruption within the story. As the anime progresses and new, peculiar characters are introduced, there seems to be a hectic storyline with plenty of plot twists which ultimately grip you until the end. Many episodes left me on edge desperate for an explanation!

Although the story is interesting and largely unique, it was hard for me to understand at moments what was happening. I had to do extra research on this series to get a better understanding of events, therefore, the anime may seem a little rushed, arguably missing plenty of key points that are presented within the webtoon - though this could be due to a low budget. Hopefully a second series, if announced, will be longer and more detailed.

So, in conclusion this anime is very stimulating. It has plenty of its own ideas and stands out from other anime I have watched before. The fights and characters within this series are fantastic and there is no doubt that a second season would be welcomed by fans. However, for greater understanding and explanation of the events that occur within The God of High School, I would recommend having a read of the webtoon!.

8
A fantastic representation of the "100% unrealism" Yongje Park discussed.