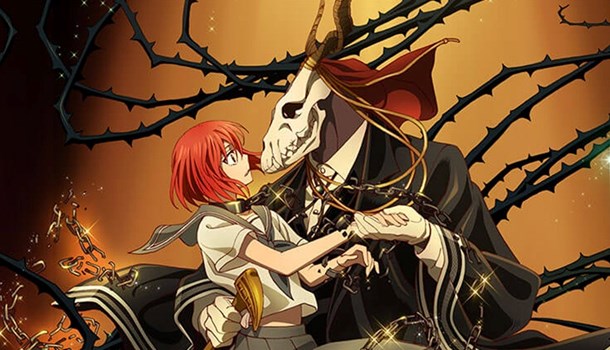 As always, being years behind the times, and with the blu-ray parts 1 and 2 having sat in the infamous to-watch pile for months, I needed something new to watch as the sweltering heat intensified. With teh complete set being released this week, I finally took the plunge on The Ancient Magus' Bride, a series that I knew little about or even why I bought it.

Expectation they say is a prison. And going into a series cold s often the best way. But would this prove true for The Ancient Magus' Bride?

Outcast teenager, Chise, decides to sell herself to find a new home. She's purchased at a London auction by Elias, a bone-faced mage that is not quite human and not quite fairy. Recognising Chise is a "Sleigh Beggy", a very special and delicate type of mage, he decides to take her on as his apprentice and, to Chise’s surprise, his bride.

All this happens in the first few minutes and reading the words cold you realise how the plot could very easily feel very creepy indeed. It reads creepily, and it manages to mix a bit of Taken's kidnapped women being sold at auction with Eyes Wide Shut's privileged wealthy men going through ludicrous ceremonies (just without the group sex and nudity). Yet somehow it navigates through this and avoids feeling grubby at all. Yes, Elias chucks Chise in the bath to wash her as soon as he gets her home, but the show avoids fanservice nudity and it’s immediately clear that Elias doesn’t realise there’s any impropriety in what he’s doing because he doesn’t have much in the way of emotion. So of course the series will follow Chise both learning to understand magic and Elias' emotional development.

And it’s the relationship, the very odd relationship between the tall, bone jawed ancient mage and teenage Chise that really makes the series work. True, there is an antagonist in the shape of Cartaphilius, an undying sorcerer who constantly appears and reappears to torment our protagonists, as well as other assorted characters, but The Ancient Magus' Bride is at its best when delving into their developing relationship. It seems ludicrous but there’s real chemistry between them and a sense of affection that just feels like it should be so wrong but works out feeling so right. She’s 16 and has had a miserable life (more of which we explore throughout the show), whereas Elias should be a detestable, greasy older man-fairy-thing-lecher. But because both teach and learn from the other and the moments of affection seem so unaffected it just works.

It's really a surprise, though I can understand some watching may find it difficult. Yet the series it never goes where you might expect; Chise is never disgusted by his appearance or even seems to think it odd. Despite her distressed entrance, Chise is a robust, resilient character and that helps make the potentially iffy relationship pass muster because she’s no placid doormat. Elias remains intriguingly, as though he's fleshed out as a character, his true nature is never fully explained. An element of romantic danger is introduced as we begin to understand what he might be and recognise hints at an inner darkness that may be dangerous to Chise.

Also in the series favour is that the animation and design by Wit Studio is very fine indeed. Though Elias lives on the “outskirts of England” and it’s all very rural, it’s never as chocolate box as it could be, though there are some curious anachronisms like a steam train at the beginning. Yet some aspects are fascinatingly precise; angled images of the exit at Paddington station is spot on (even if minus the current ongoing building work that never seems to bloody well get finished), and there are flashes of images that show that Wit Studio have really done their homework. The magical elements are beautifully designed, even if we get the occasional cost-cutting still image. Then again, Elias’ bone face is the perfect act of cost-cutting, speaking as he does through shut jaws.

As you’d expect from a twenty-four episode series, you meet a rogue’s gallery of friends and enemies as the series delves into both Elias’ and  Chise’s past, as well as that of antagonist Cartaphilius. Some of these characters, such as the dragons looked after by Elias’ mentor Lindel, are infinitely charming and exist in a properly fleshed out world. How magic interacts with the real world, as well as the fairy realms never feels paper thin, but as part of a living breathing world, even if magic seems to be one the decline and living in the shadows of modernity. But that sets the story and magic firmly in our world, even if it remains invisible to us.

If there are any issues with the series, I’d have to say it never quite manages to fully explain why Chise wants or even gets to London to sell herself. Yes, we learn the tragedies of her past, but the leap to selling yourself to a market full of weirdos feels a bit deux-ex machina. Cartaphilius also feels a bit under-baked as our leading villain. We eventually understand his long, long and painful journey, but not why he lives and acts as he does. Considering his predicament you’d think friends would be far, far more beneficial.  Also, the last few episodes focus too much at times on Cartaphilius’ past and also going too deeply into Chise’s, where it’s her future with Elias that is the series real allure. It's perhaps some of these aspects that stop the series every becoming truly great, though nevertheless it’s an enormously entertaining, visually arresting series that manages more characterisation and a more believable romance than I would have expected. At times there seemed to be overtones of Full Metal Alchemist Brotherhood through Cartaphilius’ obsession with creating chimera.

So if like me you’d put off entering the magical world of The Ancient Magus' Bride, I’d suggest putting aside your reservations and follow the unusual Elias and his bride to be, Chise into a richly magical world just outside of our own. 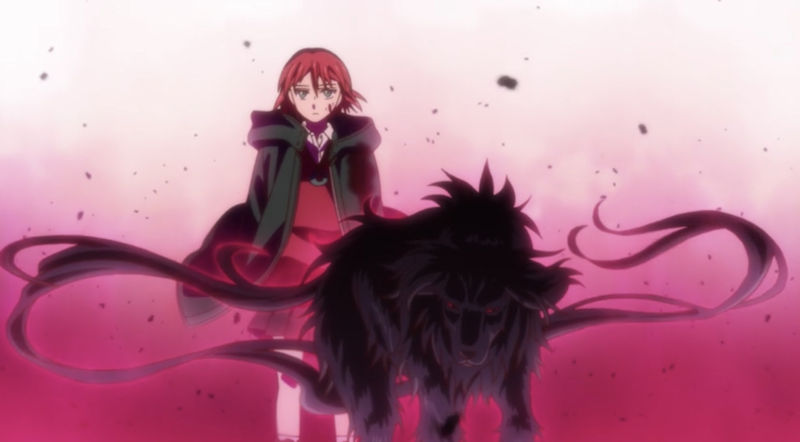