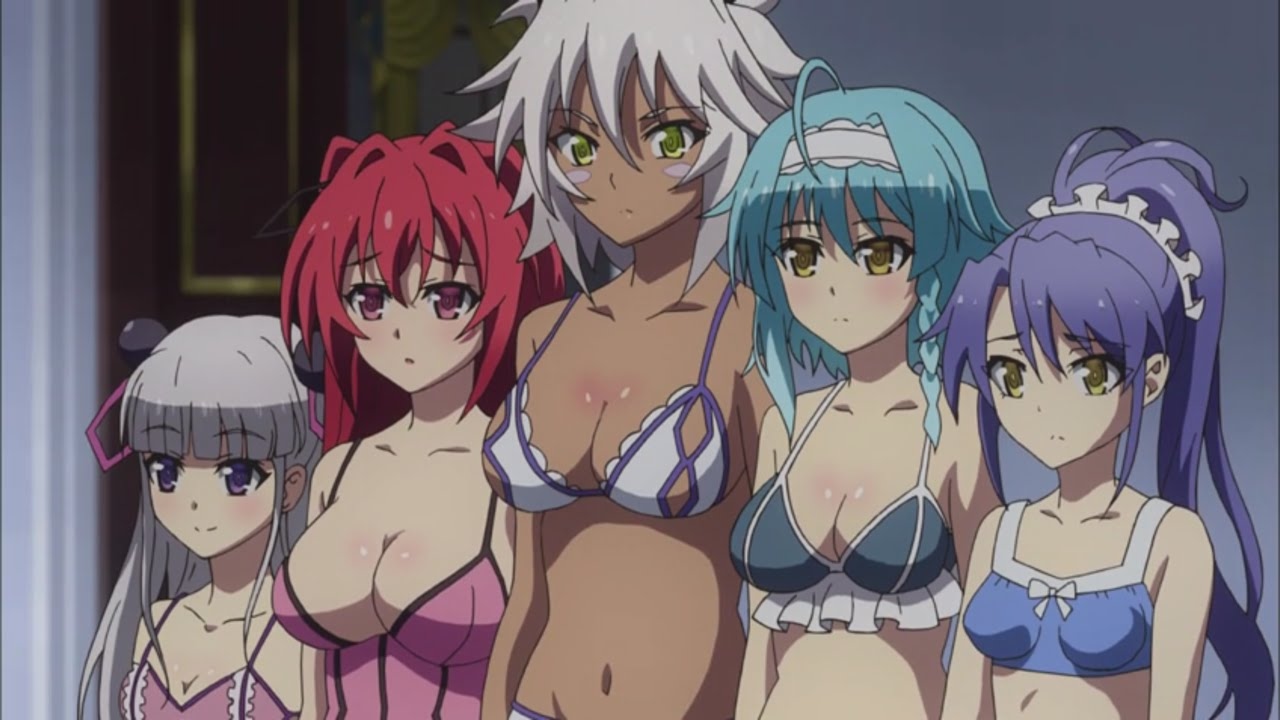 It is no secret that I do enjoy my trashy perverted anime. I have the advantage of (currently) living on my own with only my cats to judge me. Having rewatched much of Highschool DxD’s first and second seasons this last month I am quite sure that my limits have been tested, or so I thought...

I knew that Testament of Sister New Devil was pretty trashy, as I reviewed it when it streamed a few years ago. Any story whereby the main characters are drawn together through the power of a succubus master/servant contract, regardless of their familial connections, is going to be trashy. Especially when the curse associated with the contract activates on a regular basis, resulting in frequent sexy shenanigans! However, given that the show gravitates around regular sexual contact and fan service, it surprisingly has some plot to go with it!

Basara Tojo and his father live together by themselves, and have done since they were expelled from their village following an incident which occurred five years previously. One day, his father informs Basara that a new member of the family will be arriving, a little sister. Except (of course) this little sister, Mio Naruse, turns out to be someone who isn’t much younger than he is, and comes with some excess baggage in the form of Maria Naruse, who turns out to be a perverted lolita succubus. Of course, Mio isn’t entirely innocent as she is the daughter of the former Demon King, Wilbert, and she has inherited his powers. These powers have made her the target of other demons who want to extract them from her (I don’t want to know how) and manipulate her for their own gain. However, Basara isn’t going to let his new little sister be taken away, oh no! He fights back and brings her within his family using the master/servant contract, so that they can keep in contact. However, I don’t think that he originally expected that this contract would require so much (s)kinship, and would have such an attraction to others around him.

Those words are perhaps something of an understaement of what actually goes on. If you consider that when Mio goes against her “master’s” wishes or intentions, her succubus curse activates and the only method by which she can be “relieved” is through palpitation of her body… Yeah, you can see where this goes. The series has plenty of plot, in both definitions of the word. The story moves with quite a rapid pace, going through several short arcs in the duration of the 13 episode series. The story is actually quite good, in-between some of the perverted scenes, though it is definitely a series which is purely targeted at a particular audience. Generally perverted people like myself will enjoy this series. Normal people, probably not so much. I have compared the series to Highschool DxD previously, though it’s by far the weaker series, as both are similar in their content and setting, though with (almost) gender-swapped protagonists: Issei is to Rias what Mio is to Basara. If you like one series, then there is a chance you may like the other. Though, while DxD actually has a very deep story, once you get into the detail of the light novels, Testament of Sister New Devil, really doesn’t.

All things considered this Anime Limited blu-ray set is rather pretty and, unlike the series' streaming form, comes with completely uncensored animation. Also included is a full (and quite reasonably acted) English dub, the original Japanese dub with subtitles, as well as the full collection of OVA episode and Webisodes. This set is certainly complete in regards to content! Thought the OVA episode is basically pornography for all intents and purposes. To add a cherry to the cake, the collector’s edition comes with a rather tasteful (especially given the content of the series) full colour art-book, all presented in a nice cardboard hard-case. It is a very nice set, and with the series having been re-animated from its streaming release it also looks quite good.

So, the verdict. Is The Testament of Sister New Devil Season One worth watching? Well, it depends. If you have a taste for trashy anime where bare naked breasts and nipple play can be shown on a big screen TV, without fear of embarrassment or divine retribution, then yes, go ahead. If you are a normal human being who likes a good plot and doesn’t want to really watch softcore pornography of an evening, then perhaps not. As, basically, that’s what this series really is.

Collector's: Presented in a rigid case, with a digipack to hold the two Blu-ray discs. Also included is a 24-page art booklet.

DVD: Contains episodes 1 to 12 plus the OVA episode "Tojo Basara’s Hard, Sweet Daily Life"on DVD with both the English dub and the original Japanese track with English subtitles.