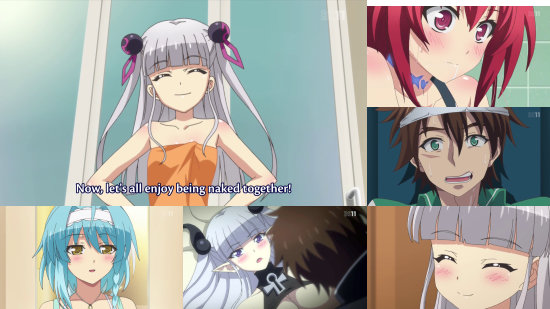 Many moons ago, when I first sat down and enjoyed my number one cat girl anime, Cat Planet Cuties, I remembered a certain scene where the catgirl crew were enjoying a sauna naked. The scene was steamy, but left basically everything on show to the delight of the salivating audience... only the creators decided to make us drooling fanboys wait for the Blu-ray release by using caricatures to hide the nudity. At the time, it was funny.

Many years later, the same tactic is being used, except with The Testament of Sister New Devil, due to its moderately pornographic content, both the disapproving caricatures, steam, and the white bars of death that marred other series like To Love-Ru Darkness, are used to obscure anything even mildly suggestive. There is absolutely nothing remaining, except a lot of moaning, to even provoke a badly folded trouser crease.

I can deal with censorship. I can deal with having some tickertape hiding nipples, but seriously, when the lolita succubus is licking the fluidic remnants of a particularly wet pleasure session from the floor, uncensored, and you can’t see anything before that point, then it’s clear that perhaps this anime shouldn’t have been released during this time slot and might have been better going straight to DVD. It’s especially taunting when the sound track has been left un-edited, and you can hear everything. It’s obvious there is no actual penetration and doesn’t quite hit the pornographic button as no-one has used the normal sound effect of three fingers into a jar of silly putty to simulate it.

Anyway, rant over - I am mostly just an annoyed lonely man who wishes he could have his harem comedies, tits and all. I will just have to wait until the DVDs are released uncensored.

I should be fairer. As with other harem shows before it, The Testament of Sister New Devil does nothing new for the genre. The majority of the series’ time is spent developing the characters and their stories, which in this case are quite deep and wide-reaching. The lolita succubus Maria and Mio are well fleshed out, in more ways than one, so as to give them depth and drive the story forward based on their past actions and experience, and even though the villains in this series are transparent and predictable (and their method of defeat even more so) the story remains interesting, purely because those characters who have been built up are involved.

Intriguing, I found myself fast forwarding through Yuki’s Master-Servant pact; wincing a bit at as Maria licked and bit her way through Basara while they were locked in Mio’s locker. I face-palmed as the best bits of Mio’s final levelling up were denied to me, and even when Maria achieved her full adult form and tried to take Basara as hers after being ordered to by her mother’s kidnapper, the story was still there. I still actually gave a damn for the characters and cared what was going to happen next. This for me was the driver for the show, and not so much the... let’s be honest, soft-core pornographic scenes. I am as much of a pervert as I have always been, and let’s also be honest here, probably more so now. I don’t see the point of devoting almost 20% of the show’s screen time to content which is denied to the viewer. Why not just scale it back and let the audience witness and enjoy what they have paid to see - a perverted and funny harem comedy that just happens to involve a lolita succubus and her well-endowed “sister”.

Right, that the rant over for real now.

One of the other highlights for me has also been the acting. Given the content, I am sometimes quite shocked that there aren’t hours of footage of voice actresses laughing hysterically after making orgasmic noises when watching footage of their character being licked and bitten. Oh to be a fly on the wall of the dubbing studio. But, one thing that is obvious is that they had fun making this series, and you know what, I can’t even complain about the characters or the art. The series is well produced even if the writing is ropey, although it is obvious that a at least 50% of the budget for character design went into Maria (and most of that, the adult Maria), with the rest split between Mio and Yuki. The girls are all cute, which is always a bonus for a harem anime.

So I give in. I secretly love this show. There, I have said it. If it ever comes out uncensored, then awesome. My main frustrations, aside from the obvious, will have been relieved, but until then based on what is available to date, the show is entertaining but the obvious censorship will deter and distract from the other positive points the show has to offer.

As for the final obvious question as to which girl is the favourite, I have fallen for Maria, now I know she has an adult form. Yes, I am a bad man.