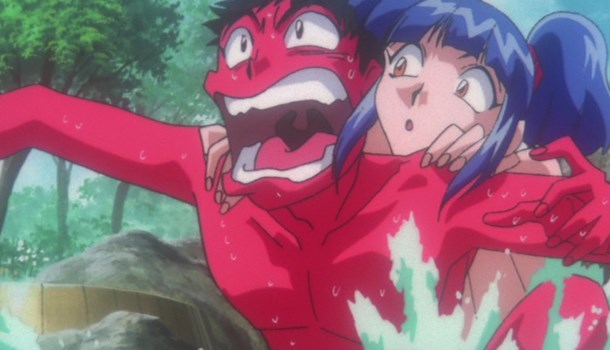 This trio of movies from the various Tenchi universes is a mixed bag, and whilst there should be something here for everyone, you may find it's not all to your taste.

Tenchi Muyo in Love is the first film, and follows the TV series canon. Here, Tenchi starts to disappear, and scientific genius Washu discovers that something has interfered with his past, erasing his timeline. From here, it's a mad dash to the past to save Tenchi's mother, Achika, from death at the hands of the recently escaped master criminal, Kane.

The film is a slow burner, with some beautiful animation and a great soundtrack by Christopher Frank (Babylon 5). Much of the Tenchi comedy is gone, and everything is very earnest, but the last 30 minutes deliver a fantastic payoff, so it's worth sticking with it to get to the end. You won't be disappointed!

Tenchi Muyo: Daughter of Darkness is set in the OAV continuity (despite the presence of Space Cop Kiyone, who was a TV canon character). Here, a mysterious young girl named Mayuka appears, claiming to be Tenchi's daughter. Naturally this throws the household into a catty spin, as all the girls try to figure out who Mayuka's mother is.

Of the three films here, this is my favourite, primarily because it's the most faithful to the OAV's pace and plotting. The animation is slightly better quality than the OAV, with the characters all getting decent screen time. The plot is fast paced and even moving in places, it stands out as the film that mixes all the best elements of Tenchi with the greatest success.

Tenchi Forever was originally marketed as the last Tenchi film, and at the time we all wasted our time getting excited over an ending for the franchise. Of course, this is Tenchi, so dispel that notion immediately - there are no conclusions offered here, rather a slow paced, mature and beautifully animated dramatic piece, which ditches comedy altogether in favour of emotional impact. The problem with this approach, which seems to affect any anime series that gets the film treatment, is that it ditches all the elements that made the series popular in the first place and tries to get artistic, a problem which Nadesico: Prince of Darkness also ran into face first.

Tenchi Forever isn't a film you'll watch repeatedly, and to be honest it grates in places as it slouches along at a very languid pace, but it's worth seeing at least once, and deserves a place in this collection.

Altogether the price tag is pretty good for the films you're getting. Your favourite film will be depicted by your own personal preferences, be it drama, comedy or a mixture of both, but if Tenchi never fulfilled its early promise, it still did a lot better than many of its ilk, and the best evidence for that is right here.

You can see our original review of Tenchi Muyo in Love here, and Tenchi Forever here.

As a bonus, you also receive the Tenchi Muyo Encyclopaedia, which was originally included in the American OAV box set – it contains some interesting info and is a nice addition to the set.

8
A mixed bag, but great value and containing some amazing moments, it's well worth your money.