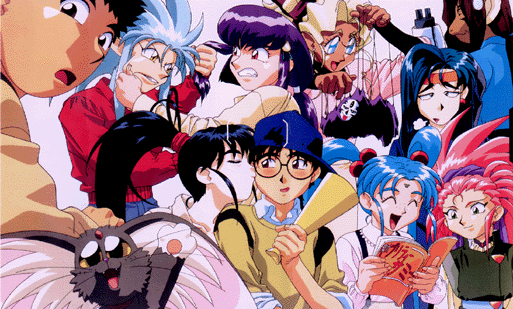 Tenchi Muyo has an odd history with me, my first exposure to the now famous series wasn't very pleasant - what I'd expected to be a serious fantasy show turned out to be a hacked Cartoon Network comedy, which quite frankly didn't impress me. However, when the "All New Tenchi Muyo" manga came out I fell in love. But for the last 2 years it hasn't really been available to watch and I stopped following the comics around the time Viz had international problems. So, now is basically my first exposure to Tenchi in quite a while (I reviewed some of the comics for my old site). To be frank I wasn't that impressed with this movie.

The animation was generally OK but nothing special, but the art was extremely nice. The characters were well drawn and shaded with very neat colouring. However, the proof is in the pudding, and pudding this is at times, at other times its rotten vegetables.

You see, the story is a good (if overused) concept - the Tenchi Team are about to dissapear because of the evil "KAIN" going back in time to kill Tenchi's mother so he can rule the world. At times (particularly the fights) this chugs along well in a nice B-Movie way. However, at other times it just seems to drag on and on and on and on. There are far too many "soppy" moments, which really don't suit the Tenchi Universe. I mean, there are minutes of basically nothing happening!

On another note its not particularly hilarious either - the raw and laugh-out-loud comedy of the manga isn't nearly as clear. Some funny bits but not exactly enough to have you rolling around on the floor laughing your head off. If you're really looking for this kind of thing try and get ahold of some "Lum Urusei Yatsura" stuff, or the original Tenchi Muyo OAV.. Far funnier.

On the whole though this is an ok movie - nothing to idolise but an essential for completists and worth a look if you like Tenchi, but casual viewers beware!

7
Ok but nothing special. I advise watching before buying.
COMMENT AND DISCUSS
blog comments powered by Disqus