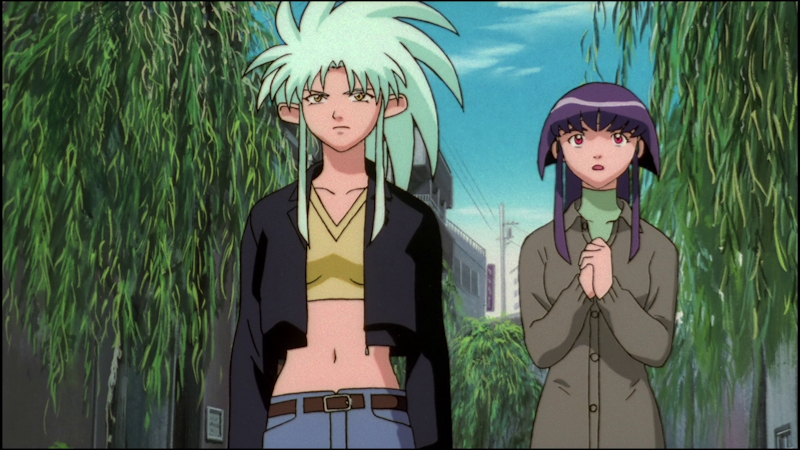 The last of the Tenchi movies is set firmly in the TV universe, and provides us with an ending (of sorts).

The story starts with the usual shrine activities - everyone's helping out except Ayeka and Ryoko, who end up fighting (as usual), causing Tenchi to seek some peace and quiet in the woods. Whilst there, he spots a beautiful and unusual tree. He inspects it... and vanishes.
The story picks up months later - there's been no sign of Tenchi since that day, and the entire cast are searching the breadth of galaxy to find him. Could Yosho's former lover, Haruna, be at the centre of events, and if so, what does she want with him?

There's no doubting that Tenchi Forever is a fabulous looking piece of animation, and the style is somewhat matured from either the OAV or the TV series. Much like Tenchi Muyo In Love, the film drops much of the madcap comedy in favour of a more melancholy mood. This will either leave fans dewey-eyed or completely turned off, as those who enjoy Tenchi for its comedy will find little to laugh at here.

By dropping the comedy, the film leaves more time to create a lot of sympathy with characters who we're all quite familiar with now. There's actually some real development in this film, and for those of us who like a sense of closure, that's the payoff for sitting through the feature.

However, the film's greatest strength is also it's weakness, as there's really very little replay value here - the slow, lingering shots are pretty and nice to sit through once, but it doesn't demand your attention, and for that reason you won't be coming back for another sitting, at least until the beauty of it has faded from memory and you fancy immersing yourself again.

To sum up, Tenchi fans have a beautiful film with real depth and character, but the pace is perhaps a little too sedate for some. Possibly one to rent rather than buy, unless of course you want to own the understated ending to the TV series itself.

7
A sedate but poignent end to Tenchi - you'll want to see it at least once.
COMMENT AND DISCUSS
blog comments powered by Disqus