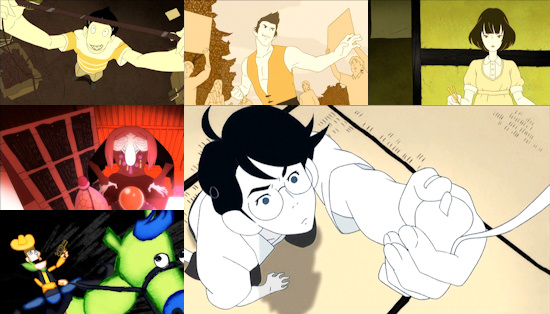 Does a “rose-colored campus life” stand before you? That is a question central to this series and it’s unnamed protagonist/narrator. Can he realise this idealised University life or is he doomed to failure? How should he go about trying to obtain his goal? That’s something we find out, but not in the manner you might expect...

You see, The Tatami Galaxy isn’t a simple linear telling of the protagonist’s tale, rather it is an exploration of all his possible choices and the consequences of them. Each episode explores a slightly different path, or so it seems at first. For example one episode sees him joining the University’s tennis club, another serving under a philosophical ”Master”, and another the University’s cycling club. This theme continues almost throughout the series, with some choices seemingly being (at least initially) more mundane than others.

What almost every episode has in common is the misfortune which follows our protagonist around, though this is often brought on by the actions of his odd-looking sometime best friend, and “demon” apparent, Ozu. Ozu is a master prankster and is always up to some mischief or other, which often results in the derailment of our search for that “rose-colored campus life”. Ozu is not alone however, and is one of many interesting characters which inhabit The Tatami Galaxy. Akashi often finds herself at the centre of our protagonists world, though he doesn’t often realise it. She’s a straight talking Engineer who’s irrational fear of moths seems at odds with her otherwise stoic demeanour. Then there’s the occasional triangle of love interests in Hanuki, Keiko, and Kaori. A dental hygenist, pen-pal and love doll (Yes, yes. I know. Trust me it’s hilarious) respectively. Jōgasaki, who is president of the University’s film club, a massive pervert, and rival of our protagonists sometime “Master”. The “Master” himself Master Higuchi, who has an unbelievably large chin and believe it or not is first introduced as a Love Deity. A haggard old fortune teller who has an interesting pricing policy. Johnny who... well... represents the protagonists repressed libido, and does so hilariously. They are by no means the whole cast, but do probably represent the main players, and as you can probably tell they are a colourful bunch.

What The Tatami Galaxy does brilliantly is take it’s time resetting premise (which despite sounding a bit like the infamous “Endless Eight” arc of The Melancholy of Haruhi Suzumiya is anything but) and its seemingly mismatched cast and ties them together perfectly into a seamless whole. Even when things appear to get a little weird (which it certainly does from time to time) the series still manages to maintain its cohesion. Visually the simplicity of the show’s animation belies brilliance - it is fluid and colourful and suits the series to a tee. You will want to simply take in the beauty of this series - however I’m afraid you won’t be able to.

You see this is a series then throws a lot of fast dialogue and verbal information at the viewer and, being a subtitle-only series, that means you need to read a lot and have very little time in which to read it. This results in the viewer missing lots, be it text or visual queues. If you want to try and take everything in you will be hitting rewind and pause regularly and that really spoils the flow of a series. This really is a shame as despite being somewhat verbose the series’ dialog is incredibly witty, featuring some spectacular put-downs, comebacks and one-liners. However the series’ greatest achievement is perhaps managing to tie up all it’s seemingly disparate threads into a satisfying conclusion.

The Tatami Galaxy then is a brilliant, funny and clever series which is is somewhat spoilt by the practicalities of subtitles and a protagonist that talks at 100mph. If ever a series was crying out for a dub it is this one, but sadly none exists. If you are a speed reader then this series is your ambrosia. However, if you're a mere mortal you will almost certainly need multiple viewings to make the most of this series. That shouldn’t be a deal breaker for anyone who enjoys intelligent and witty anime, but it certainly isn’t ideal.

8
A smart and witty series, let down only by the challenging subtitles.
COMMENT AND DISCUSS
blog comments powered by Disqus