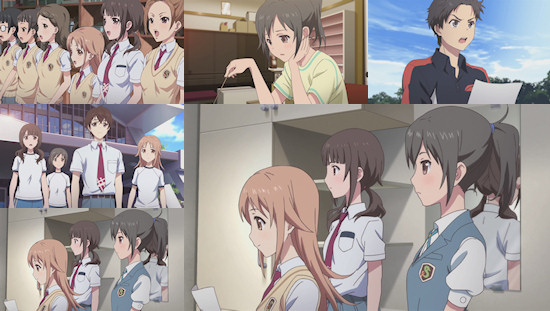 Given their recent success rate in creating entertaining original anime, from the likes of Angel Beats through to Hanasaku Iroha, the arrival of a new series from P.A. Works is always worthy of note, leading us to take more than a passing interest in Tari Tari, the studio's offering for this summer which also thankfully happens to be receiving a streaming treatment courtesy of Crunchyroll.

Before we start though, let's get one rather important point out of the way - if you're on the lookout for a series with a fresh, interesting and innovative story, Tari Tari will leave you frustrated before you've even begun, for reasons which should become clear once you read the synopsis below.

As the series begins, we're introduced very briefly to a number of high school students, each of whom seems to have decidedly disparate interests, family situations and so on.  Our focus quickly zooms in on Konatsu Miyamoto, a cheerful, energetic and slightly oddball girl with a love of singing.  The trouble is Miyamoto can't catch a break in the school's existing music club, relegated as she is to simply turning pages of sheet music for the club's pianist, and her attempts to gain a proper place in the choir not only fall on deaf ears but see her kicked out of the club entirely.

Thus, there's only one option open to Miyamoto - to create her own club.  With hookers, and blackjack!  Okay, well maybe not those things, but nonetheless Miyamoto sets out to create her own "choir club".  So begins her decidedly typical adventures in terms of persuaded and recruiting the required number of members for the club to become official, taking part in a recital and so on - a task which twists and turns quite frequently over these opening episodes.

The main attempt to add a little more frisson and drama to this unspectacular set-up is Wakana Sakai, a quiet girl who seems to have little time for either friendship or after-school activities, but a girl who attracts the attention not just of Miyamoto but also the school's principles - it's her involvement which effectively seals the choir club's birth, and by the third episode we start to get an idea of why encouraging Sakai to take up singing is so important to the head of the school.

If you've managed to stay awake up to this point in the review (don't blame me that the plot is dull!) then let's get to the really good news about these initial instalments of Tari Tari - they're actually exceedingly well-written and naturally, organically funny.  The first episode in particular manages to sidestep its dull plot by exhibiting plenty of hilarious, laugh out loud comedy, and although subsequent episodes are a little lighter in these terms they still raise plenty of laughs and smiles from a mixture of good old-fashioned slapstick and witty one-liners.

This sense of fun is bolstered further by the show's roster of characters - yeah, they're all pretty cliched from the foreign transfer student with a poor grasp of Japanese language and culture through to the aforementioned energetic Miyamoto, but as individuals and a group they do actually work pretty well in the serving the requirements of the series so far, which makes the lack of innovation somewhat more palatable.  Our main concern here is that the dramatic elements which look set to underpin Tari Tari as it moves forward feel weak to the point of being flimsy, which could well sink the show further down the line if it isn't careful.

We'd be hard-pressed to discuss a P.A. Works series without discussing its visuals, and as usual this studio have brought some top-notch animation to the table - perhaps not quite as striking as their efforts in Hanasaku Iroha but not far from that level of quality, and the gorgeous sheen and attention to detail lavished upon everything that the series does is another positive that helps to dim down criticism of the show's plot.

So there you have it - Tari Tari is a series that, thus far, somehow manages to be more than the sum of its story telling parts as it succeeds in taking an incredibly tired old idea and breathe enough life into it to make it sufficiently fun and entertaining to be watchable.  If you aren't looking for your world to be set alight, then what we have here is a relatively sedate, well paced and frequently funny tale featuring a group of mostly lovable characters. It's the perfect tonic after a rough day at work, and also a perfect fit for the streaming anime model - this is the kind of show you'll have forgotten about by the time the winter rolls around, but so far it's an enjoyable distraction to take you through the summer season.

7
Tari Tari rolls out a tired old storyline, but does so with fun characters and well-written comedy to make it far more enjoyable than its concept suggests.
COMMENT AND DISCUSS
blog comments powered by Disqus