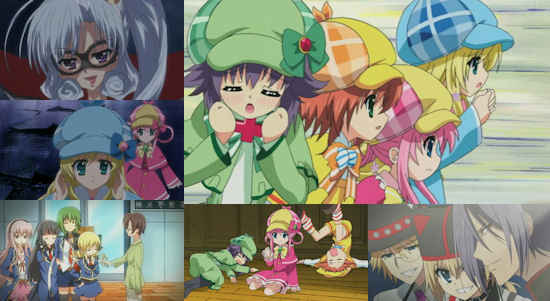 Modern crime-fighting just isn't what it used to be, in literature at least - whatever happened to the days of great detectives with brilliant minds as they engaged in battles of wits against similarly smart and cunning criminal masterminds?  If you pine for such days, then Tantei Opera Milky Holmes quickly posts its intentions to pay homage to these enjoyable classics to some degree at least, complete with a unique anime-style spin.

In fact, right from the introduction to the show's opening credits we establish that the series is set in an "age of detectives" as they fight to prevent crime committed by "gentlemen thieves", before being taken onwards to a similarly rapid explanation of how they go about this.  This gives us a glimpse of the four girls which make up the renowned Milky Holmes group; a quartet of young female detectives who are the stars of the Holmes Detective Academy, each with their individual special powers known as Toys which range from super-human strength through to telekinesis.

However, we don't get to enjoy this show of power and ability for long, as an unexpected explosion in their initial skirmish with the Gentlemen Thieves and their confusingly female leader Arsene (no relation to the Arsenal manager, I hope) leads to the loss of their powers.  Following this revelation, these opening three episodes focus primarily on the Milky Holmes girls as their former celebrity status in the academy turns sour - no Toys ability means that these celebrated crime solvers are now no more than bumbling idiots, and before they know it they're relegated to a dingy room in the attic and nothing but potatoes to eat, a far cry from their previously luxurious lifestyle.

While this might all sound like rather serious business, Tantei Opera Milky Holmes is primarily all about comedy, making the most of its crime-fighting geniuses turned ditzy idiots central plot while also requesting a rather hefty suspension of disbelief by having all of those aforementioned Gentlemen Thieves working undercover at the Holmes Detective Academy by day before going on an audacious crime spree at night.  The show's sense of humour in these early episodes is frequently rather random and daft, from playing Twister in a museum onwards, while you get a feeling that this series isn't quite sure exactly what it wants to be - one moment it's a run-of-the-mill, child-like cutesy comedy and the next it veers into risqué territory and borders upon outright fan service.

This leaves us with a series that it's rather difficult to make head or tale of at this juncture - it's introduced us to girls with special powers then immediately stripped those powers away from them, and at the moment it shows only the briefest glimpses of allowing those abilities to return.  We're also left with a gang of criminals who seem to care more for the well-being of their arch-rivals than the crimes they commit, and no real threat, menace or excitement to speak of in terms of the actual crime-fighting side of the series.

What we're left with then is an anime that seems confused about both its target audience and its broader aims; or if you're feeling cynical that it knows exactly what it's doing, that being little more than serving as an advertisement for the franchise's trading cards and forthcoming PSP games.  There's something that simply feels incomplete about these episodes, whether it's the slightly basic and stilted animation that often rears its head or the half-baked and sometimes even lazy attempts at comedy and story-telling that suggest they might be building towards something but ultimately fizzle out.  Although it's difficult to explicitly dislike these first few episodes of Tantei Opera Milky Holmes on account of its bright and breezy persona, by the same token there's nothing to hold your interest or keep you entertained that hasn't been done better countless times before, giving you the impression that a large swathe of these episodes were simply "phoned in".

5
Its premise is competent enough, but its lack of story-telling and comedy nous leaves us with a decidedly mediocre start to this series.
COMMENT AND DISCUSS
blog comments powered by Disqus