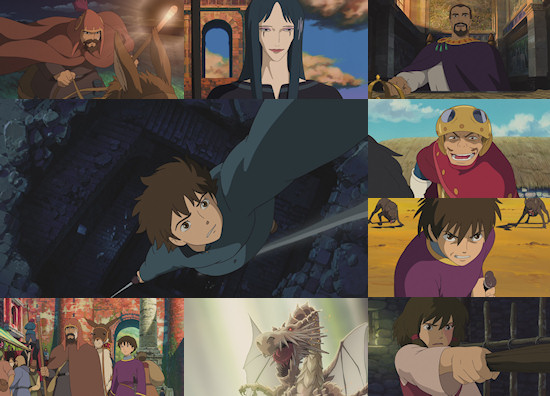 Alongside the remastered Blu-Ray release of Howl's Moving Castle here in the UK (which we covered just last week), this latest batch of Studio Ghibli remasters has also provided us with a pristine new transfer of Goro Miyazaki's directorial debut, Tales From Earthsea.  It might not be the studio's most loved film, but does this High Definition version do it any favours?

Based around a combination of ideas and characters from the Earthsea series of books from which this film takes its name, Tales from Earthsea introduces us to a world in turmoil - with illness spreading across the land and affecting both humans and animals while dragons are spotted fighting one another above the high seas, something is clearly amiss with the balance of the world.  But what to do about it?  Just as we begin to ponder this problem the king of this land, known as Enlad, is attacked and killed - an attack carried out by his own son Arren no less, although Arren himself seems to have no real understanding as to why he's performed this gruesome task as he flees in fear.

Now on the run, Arren soon threatens to become unstuck in the wilds of the wider world, before he's found and taken in by a kindly wizard known as Sparrowhawk, who seems to take a liking to his new companion immediately despite his occasionally fierce nature and without questioning the reason for Arren's own journey.  It's Sparrowhawk who keeps young Arren safe from the numerous dangers of the world, be it drugs or the risk of being sold into slavery, while introducing him to his close friend Tenar and a distinctive girl in her care, Therru.  It's Therru and Arren that prove to be the pivotal characters as the film moves towards its climax, as its story wraps back around to take in the crumbling balance of the world in the face of a rival wizard to Sparrowhawk named Lord Cob, who has some particularly selfish desires of some of the world's power and capabilities.

Visually, this isn't one of Studio Ghibli's most stunning efforts, but even when its animators don't bring their "A-game" to the table it still provides us with a wonderfully detailed and lovingly rendered world of Enlad, full of movement when required and bursting with small, intricate touches that make that world both believable and a joy to watch.  This is, of course, helped along by the film's High Definition transfer, which as is now par for the course with these StudioCanal releases looks crisp, clean and downright wonderful.  You'll have seen better-looking Studio Ghibli works, but as a whole this film is no slouch either.

Unfortunately the same can't really be said of the film's story-telling - as perhaps is befitting of a movie made from a number of ideas and characters taken from its source material, there's a disjointed feeling to Tales of Earthsea with disparate events, scenarios and occurrences which occasionally struggle to fit together into a coherent whole.  Everything might make sense by the end of the film, but that doesn't mean that it's a compelling viewing experience as parts of the film outstay their welcome (the film could probably do with being at least twenty, and maybe even thirty, minutes shorter) while others get short shrift.

Tales from Earthsea also struggles in terms of being a film with something to say - although it has an overarching moral and train of thought it wishes to explore, it does so in a hugely simplistic way, meaning that the final third of the film is effectively spent parroting the same thoughts over and over again just in case you didn't pick up on it the first dozen times.  Without anything more substantial to say, and without the kind of strong characters we're used to from Ghibli productions (none of the leads in Earthsea manage to reach these heights any more than fleetingly), we're left with a movie that doesn't have a whole lot to say.  This wouldn't be a problem if Tales from Earthsea were an action-packed fantasy adventure, but it clearly isn't - with only some brief bursts of action which don't live long in the memory, there's nothing to set either your brain or your pulse racing.

As a result, Tales from Earthsea isn't an outright bad film, but it is a very, very mediocre one that suffers yet further as it pales into comparison with almost every other work in Studio Ghibli's catalogue.  Aside from a small handful of breath-taking visual moments and one or two slickly presented scenes, there's nothing within the film to keep you watching or make you fall in love with its world and characters.  This is another splendid looking and sounding Blu-Ray release with no shortage of extras, but unless you're a Studio Ghibli completest it's decidedly hard to recommend picking up this movie.

5
A very mediocre movie that has little to say, and even less to keep you entertained while it's saying it.
COMMENT AND DISCUSS
blog comments powered by Disqus