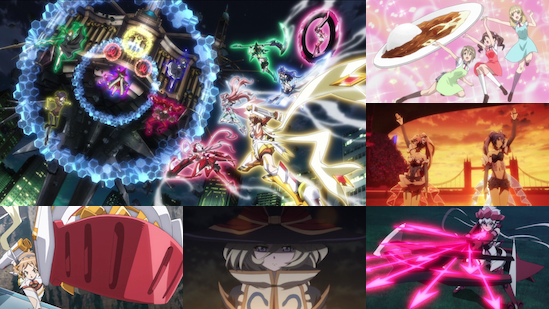 Back in 2012, Encourage Films and Satelight collaborated on a series about girls in high-tech battle suits who sang songs to power up while they beat up monsters with flashy and over-the-top attacks. That series went by the name of Symphogear, and proved popular enough to return the following year with a sequel series - Symphogear G. Building upon the world it had already created with new characters, more songs and even more absurd attacks, Symphogear G continued to take the franchise from strength to strength in Japan and now it has inevitably returned for a third season. However, for Western fans Symphogear GX has proven to be something extra special, as the show makes its simulcast debut on Crunchyroll at long last. With neither of the first two seasons in sight this might not be much of a consolation to newcomers, but hey - better late than never!

For those previously unfamiliar with Symphogear, here’s a brief summary of events so far in an attempt to bring you up to speed. The Symphogear themselves are battle armour created from ancient relics, with form when the user harmonises with the relic through song. The Symphogear wielders then battle against the Noise - an unknown alien race which turn humans to dust upon contact. The series primarily follows Hibiki Tachibana - a high school girl who became entangled in the conflict after a fragment of a relic became embedded in her during a Noise attack. Together with popular idol Tsubasa Kanzari and the hot-headed Chris Yukine, she has been fighting against the Noise (and those who attempt to control them) ever since.

However at the end of Symphogear G the Noise were finally defeated, and the trio gained new allies in the form of Maria, Shirabe and Kirika - Symphogear users who had once been their enemy. Three months later, a new enemy arrives in the form of Carol Malus Dienheim - an alchemist who has vowed to destroy the world. Not only do the Symphogear seem to have little effect on her homunculi henchmen, but Carol also displays the ability to summon a brand new form of augmented Noise known as Alca-Noise. Unfortunately for our heroes, this breed of Noise also have the ability to completely destroy Symphogear armour at the slightest touch.

Truthfully no summary is going to be substitute for watching the first two seasons before hitting Symphogear GX, but when it comes to simply enjoying the series for what it is they aren’t quite as integral as you might first believe. Make no mistake, Symphogear has a fairly deep lore when it comes to its relics and a textbook full of terminology, but a lot of what these things mean or do can thankfully be inferred from the show itself. Although there are a fair few things in the opening episode that will be confusing to newcomers (particularly the situation surrounding Maria, Shirabe and Kirika), the narrative otherwise does a pretty good job of filling in most of the blanks. This probably won’t last for the whole show, but for now at least it isn’t trying too hard to throw viewers into the deep end.

One thing that Symphogear excelled at between seasons one and two was its ability to raise the stakes, and once again it seems to have managed to do the same here. The introduction of humanoid threat not preoccupied with controlling the Noise makes for a refreshing change of pace and a better match for the heroes in terms of skill. As such its a little disappointing that the faceless Alca-Noise are introduced so quickly, but then without them the show would have lacked an outlet for one of it’s most enjoyable aspects - armoured girls ploughing through monsters with ridiculous attacks. It wasn’t broken before, so maybe there’s not really any need to fix it.

As for the action itself, it’s exactly the kind of thing you’d expect from a series that has the tagline “Believe in justice and hold a determination to fist” (Stop sniggering at the back - Ed.). The opening sequence is a rescue mission rather than a fight, and still manages to feature the K2 mountain being punched in half. When the attacks themselves feature names like “Megadeth Party” and “One Thousand Tears”, it gives you a good indication of what level of over the top-ness to expect. With the main trio of heroes all covering a different base (Hibiki specialises in fist fighting, Tsubasa is a sword fighter and Chris has seemingly one of the biggest artilleries in anime at her disposal) there’s something for everyone no matter what kind of action you prefer, and in all instances its beautiful to watch. Satelight have come a long way as a studio since the series began, with GX already boasting both great action scenes and a stunning live concert in the first episode.

However, the occasion of Symphogear finally being available legally to fans worldwide is somewhat marred by the questionable handling of the show’s musical content. Subbing songs in anime has always been a difficult area thanks to licensing, and while at first it seems that Symphogear has managed to escape unscathed it then gives way to an experience that can only be best described as ‘incomplete’. While some of the songs are indeed subtitled, others are completely forgotten about - and this often happens within the very same episode. While knowing the song meanings is in no way integral to the enjoyment of Symphogear, in a show so music-heavy it does make you feel like you’re missing out on the full experience. It isn’t just background battle music either - the lyrics are coming from the characters’ mouths and are more often than not are a reflection of their personalities. What we’ve got is certainly better than nothing, but it’s just a bit disappointing to see this release lacking the one ingredient to make it really worth celebrating.

Symphogear GX was never going to be the best starting point for newcomers interested in the series, but if you can quickly wrap your head around the mythology (most of which isn’t actually required to follow the story at a basic level) you’ll quickly discover what’s made Symphogear so popular in the first place. Great characters, great action and great music - a trio that has worked in perfect harmony so far and looks to continue to do so with this third season.

You can currently watch Symphogear GX in streaming form on Crunchyroll.

8
Just get past the jargon and even beginners will be able to see what makes this show so popular.
COMMENT AND DISCUSS
blog comments powered by Disqus