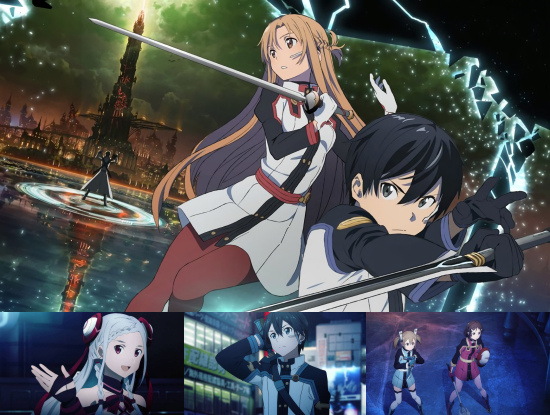 Virtual reality is so 2024 - now, the year is 2026 and the latest craze is Augmented Reality, allowing for the overlaying of data, graphics and even entire virtual worlds over the one surrounding us. At the forefront of the craze is Ordinal Scale, an MMO of sorts where boss battles and the like take place in the real world, causing users to flock to use it and away from traditional VRMMORPGs.

While many are thrilled and excited by this new device - named Augma - and its possibilities, of all people Kirito seems surprisingly cold about the technology; not only is he rightly a little wary of the ability to track user's habits and what they do, but more importantly he's far from impressed by the user experience offered compared to the freedom of movement beyond that of most humans presented by VR "full dive" technologies. Thus, he merely humours Asuna and company as they romp around giving up their personal data for cheap cake or engaging in boss battles within Ordinal Scale.

However, even Kirito's half-hearted interest is piqued when bosses from the original Sword Art Online start showing up in Ordinal Scale, and he's even persuaded to try one out, as unimpressive as he ultimately finds the experience - leaping around a real world in your own body is a different proposition to controlling your avatar in VR, as it turns out. While this experience is a frustrating but intriguing one for our protagonist, he's by no means done with the world of Ordinal Scale, as occurences targeting survivors of Sword Art Online start to ramp up and take some decidedly disturbing turns. Can he get to the bottom of what's going on, as the legacy of what took place in Aincrad and everything that goes with it threatens to be wiped out completely?

Sword Art Online's action scenes have always been a real spectacle even when they're moored to TV animation, so the prospect of letting the same director, animation team and studio rip with a theatrical budget and schedule was always a mouth-watering prospect. With that in mind, you'll be more than a little happy to hear that in terms of its visuals Ordinal Scale absolutely knocks it out of the park. The film manages to serve up plenty of augmented reality boss battles, all of which are simply spectacular - fast, dynamic, and with a really unique feel that matches the more grounded, real-world movement of players without most of the flying, spinning spectacle normally seen within the series that arguably feels more satisfying as a result. Even all of these incredible scenes are mere appetisers for the main course though - the show's final climatic battle which I won't spoil but turns every dial up to eleven in terms of that speed and dynamism, while also providing a chance for the entire cast to shine in a way which left a big grin on my face. Outside of its big set pieces, Ordinal Scale is less spectacular but remains accomplished - its real-world locations get plenty of love and detail, and its characters enjoy an expressive outing complete with new designs and outfits where they rarely go off-model as befitting of a big screen experience for the franchise.

I imagine at this point you're wondering why I've tackled the film's animation up-front when I'd normally talk about the narrative first and foremost. Well, there's a reason for that, and the reason is... that Ordinal Scale's plot is largely weak, poorly paced and struggles to carry the ideas piled upon its back. This is a real shame, as I loved the film's opening gambit - Augmented Reality is a fascinating technology and one that sits firmly within author Reki Kawahara's sphere of interest, and he shows this by effortlessly making a number of points about its benefits and drawbacks in a way that has close ties to our current use of technology and how private companies profit from data they compile about us.

However, none of this ever really comes into the picture again from that point forth, and none of this ties into the film's ultimate theme of memories and their importance - a theme which itself is fumbled in a way that leaves it struggling to create any kind of emotional resonance when you should clearly be feeling for or caring about the characters involved.

The real core of the stuggle the film has however is how to make use of its Augmented Reality premise - while it's easy to build up a rule set for a virtual reality game to suit a narrative, it's much harder to do so when you're at least partially constrained by real-world considerations, and this shows up like a sore thumb in Ordinal Scale. At times, the plot is practically creaking around the seams as it tries to juggle "reality" with "things that it would be cool to do in a Sword Art Online movie", and by the end the film basically gives up, throws the physics text book into the bin and goes nuts for its final act. In a way maybe that's what it should have done in the first place, as sometimes it's easier to forgive a plot the odd nonchalant shrug than it is a story that ties itself in knots trying to explain "the science bit" of an increasingly nonsensical scenario. I know some will argue that Sword Art Online has always had this problem, but for my part I've always appreciated the care that has gone into at least trying to create coherent, consistent explanations for events, and that feels subpar here compared to previous entries in the franchise.

If I'm being frank, the film could also have done with being half an hour shorter and aiming for the kind of 90 minute running time usually seen from Shounen Jump films. Instead, Ordinal Scale clocks in at two hours and struggles to do enough to fill all of that time - it tries to explore the romance between Kirito and Asuna but fails spectacularly, and other similar efforts to give some heft to the world and characters during downtime ultimately feel redundant. One almost suspects that some of these scenes have been slipped into place to try and ground newcomers to the franchise in the world and characters (and I'd be curious to know if it succeeds), but as a long-standing Sword Art Online viewer it provided neither any new information nor much in the way of comedy or enjoyable character moments. Sword Art Online has never done comedy very well, but most of it feels particularly ill-equipped here.

As the final nail in the narrative coffin, none of the film's new characters really work all that well either - we have the inevitable idol character (as we know, it's now enshrined in Japanese law that every anime must have at least one idol in it) who is fine but never gets fleshed out in the ways that she needs to be, and some antagonists who are forgettable and have agendas that are muddled at best. It's always the sign of a good anime original character when you find yourself hoping that they'll turn up again in future iterations of the series, but if I never see any of these new characters again I'll be quite happy.

To counter all of the griping, I will say this - Sword Art Online: Ordinal Scale is a good popcorn anime movie if you're looking for a film peppered with jaw-dropping action scenes, and if you're a massive Sword Art Online fan you'll probably lap it up simply because it offers an opportunity to see your favourite characters leaping around on the big screen. In a way, this is why I wish the film were shorter - target those demographics with pin-point accuracy and you can create a great little movie (just take a look at the Boruto theatrical film if you want a perfect example of that in action). However, Ordinal Scale tries to be and do too many things and ends up frequently tripping over its feet like a VR player trying out his usual tricks in augmented reality.

Essentially then, Ordinal Scale checks all of the boxes to be a popular film for massive fans of Sword Art Online, but take a step away from that and the cracks will begin to show to reveal a movie which one suspects could have been so much better.

Sword Art Online the Movie: Ordinal Scale previews in cinemas across the UK on 19th April, and arrives in selected cinemas from the 21st April

6
Go and watch this film for its incredible action scenes - just don't expect much from its narrative.
COMMENT AND DISCUSS
blog comments powered by Disqus