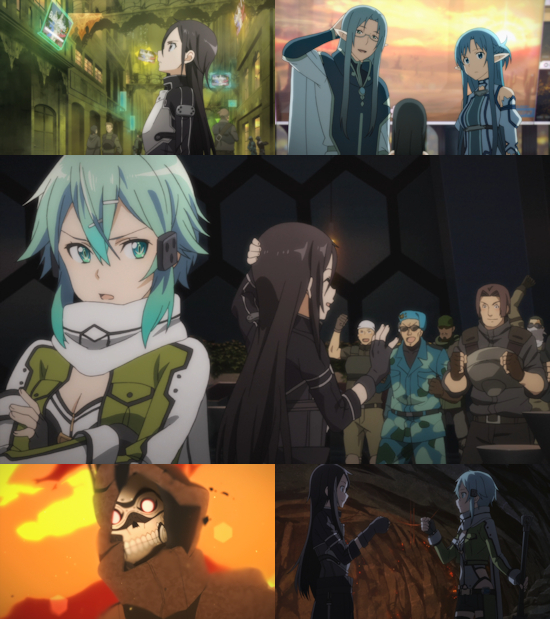 As if the dangerous game within which Kirito had become embroiled as part of a mission to investigate some strange goings-on within the VRMMO of Gun Gale Online didn't already threaten to be deadly, events in the first volume of Sword Art Online II had brought a distinctly sharp edge to this danger which could be traced all the way back to Sword Art Online itself.

There's little time to reflect upon this however, as the third and latest "Bullet of Bullets" tournament is about to begin, with Kirito and his new friend, ace sniper Sinon, amongst the more prominent participants. Thish high profile event seems like a perfect showcase for Death Gun and his alledged ability to play Gun Gale Online players in real life, but which participant in the tournament is he and can he be stopped?

The Bullet of Bullets tournament ultimately becomes the centre stage for almost the entirety of this second volume of Sword Art Online II - and what a stage it is too, provided plenty of opportunities for stunning action scenes coupled with a growing sense of tension which ramps up markedly as the number of surviving players drops and Death Gun begins to make his mark by fair means or foul. As events come to a head, so both Sinon and Kirito have to face up to past events which have haunted them, be it a dark moment from the former's childhood or events in Sword Art Online for the latter - however, perhaps it's these very events which will define their ability to survive as Death Gun turns his attentions squarely upon Sinon herself?

By the end of this volume, so the Phantom Bullet arc has come to an end in a reasonably compelling fashion, even if it does make the same mistake as the Fairy Dance story that made up the second half of the first season by taking an impressive female character and reducing her to something of a "damsel in distress" who needs to be rescued by Kirito more often than it probably should. In fairness, the narrative is at least written in a way that makes many of these moments believable, but it does still feel like an easy way out for the story when it could work harder to allow Sinon's character to remain remarkable in her own right.

Then again, the series manages to dodge too much responsibility for these fumbles when the journey itself is so immensely entertaining - a real blockbuster of a story with its well crafted and superbly animated action set pieces and a general level of polish to almost every aspect of the series which really makes full use of its status as a big-name production as TV anime goes. In these basic terms, this is Sword Art Online at its best - whether it's goofing around or engaging in some serious moments of dramatic tension, it's gripping stuff that you can't tear yourself away from, and it serves as a reminder of why the franchise holds the popularity that it does.

Alongside a strong showing from the series' Japanese voice cast, the English dub across this volume also holds up very well - Sinon's character continues to be a little too dry and monotone in ways which don't always suit, but this is the sole exception in a dub that otherwise tends towards being a good effort. If you're sticking with its native audio treatment however, the English subtitles available here are almost flawless - although our Blu-ray edition of the volume continues to subtly mistime the subtitle for each episode title card so it doesn't show up if you skip the opening credits (which also tended to a problem in part one), all dialogue is present and correct without any major errors.

Also included on this particular volume is episode 14.5, which retells the Phantom Bullet arc from Sinon's perspective - make no mistake though, it's a recap episode through and through, and can absolutely be skipped unless you have the memory of a goldfish. As per part one, only Blu-ray viewers get to enjoy the Sword Art Offline II shorts which are missing from the DVD component of this combo pack, so you'll need to jump on the HD bandwagon if you want to watch these comedy skits. On the physical side of the package, the Collector's Edition for this volume features a 52 page booklet with interviews, episode synopsis and location and character studies - we're yet to see the physical packaging at the time of this review however.

I mentioned in our review of part one of Sword Art Online II that it was "all build-up and no pay-off" - well, part two is where that pay-off arrives, and boy does it arrive in spades. If you enjoyed the first series, or at least the first half of that series, then this will deliver at least as much satisfaction and entertainment in your general direction, and even some narrative choices that arguably could have been better made don't interfere with that. With plenty of top-notch animation to bring its impressively well-realised story to life, this batch of episodes is a real treat.

8
This second volume of Sword Art Online II pays off everything that was built-up in part one, making for a rip-roaring and action-packed story.
COMMENT AND DISCUSS
blog comments powered by Disqus