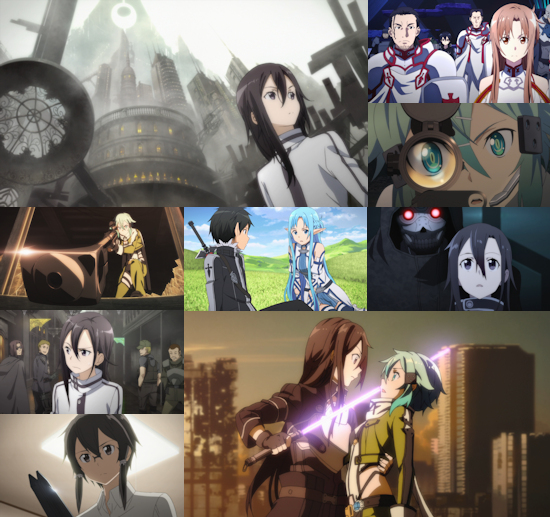 It's a year on from the end of the horrific Sword Art Online incident, and everything has returned to relative normality for those caught up in that life or death struggle within a virtual world, meaning a return to school and other everyday activities, including (perhaps surprisingly) plenty of time indulging in other virtual worlds and games via the AmuSphere headsets which came to replace their rather more deadly NerveGear predecessors.

For Kazuto Kirigaya however, his experiences within Sword Art Online and the events which occurred around its deactivation have led him to be even more fascinated with the possibilities of virtual realities and the "gap" between them and our actual living, breathing world. While this dedication looks forward with a view towards a career after his school life, Kazuto finds himself saddled with a more recent concern thanks to his contact at the government's "Virtual Division".

In short, Kazuto is press-ganged into aiding the investigate into some strange cases which have cropped up around another VRMMO (Virtual Reality Massively Multi-player Online game) named Gun Gale Online, where two individuals have tied from heart failure with an unknown cause at times matching a player within the game making a threat against the lives of those very same people. Is it really possible for someone to commit murder within this supposedly safe virtual environment? It seems unlikely, but the concern is real enough for Kazuto's online alter-ego Kirito to make the switch from ALfheim Online to Gun Gale Online to investigate the mysterious individual known as Death Gun who resides at the centre of these rumours.

As a newcomer to this particular virtual world, Kirito makes the acquaintance of Sinon, GGO's ace sniper who finds herself falling in somewhat unwillingly with this newbie, finding herself both fascinated and frustrated by him. As time passes and the pair take on the preliminary round of GGO's biggest tournament, the Bullet of Bullets, it's clear that there's something of a connection between the two characters as their online battles within the present reflect their desires to overcome harrowing memories from the past. Indeed, in Kirito's case this uncomfortable memory from his time in Sword Art Online looks set to come back and haunt him in a big way...

We've already seen the difficulties inherent in Sword Art Online's roots from the Fairy Dance arc which made up the second half of its first season - how do you build upon a terrific one-off story in a way that is both organic and entertaining in its own right? In that sense, these early episodes of Sword Art Online II are clearly an attempt to return to those roots - throwing Kirito into a virtual world with life or death connotations, even if this time the threat is far more specific than that of the original story.

The good news is that broadly this works well - the way this story arc ties into Kirito's experiences within Sword Art Online itself are satisfying and up the stakes markedly, and the introduction of Sinon and her own unique back story adds another dimension to proceedings and gives our protagonist a suitable foil to bounce off as the world of Gun Gale Online builds around their efforts and interactions. Much like the original series, it's the world-building that arguably steals the show here - yes it takes some liberties, but for the most part GGO and everything which occurs within it feels tangible and believable, with every element of its virtual reality proving to be considered and well thought-out.

This sense of place helps to paper over the cracks of Sword Art Online II's clumsier moments, as it finds itself trying to shoe-horn in half-baked philosophical discussions on the nature of reality versus virtual reality, ripping off Star Wars' lightsaber sound effects and all or (most hilariously) tries to illustrate Death Gun's supposed ability to kill players within the game by depicting a bullet flying improbably through an Ethernet port. These are the moments that detractors will hold up to dismiss the entire series as bunkum, but thankfully they are but isolated incidents within an overall package that is slick and smartly paced.

Much like the first season, Sword Art Online II is also on top of its game in terms of animation quality - Gun Gale Online lacks the colourful aesthetic of its virtual world predecessors but looks fantastic and exactly how you'd expect a VR first-person shooter to present itself, and its action scenes in particularly are expertly realised to ooze cool from every pore. Add in appealing character designs and a soundtrack from Yuki Kajiura that is a perfect fit to the show's aesthetic and you have yourself a compelling presentational package that befits the show's status as a hot anime property.

It probably goes without saying that this presentation is best indulged in via the Blu-ray side of Anime Limited's DoublePlay package, but its DVD edition is also passable if lacking in the detail and technical chops to really make the most of the show's action scenes. The subtitles on the Blu-ray side of the release that we primarily used for this review are all solid and serve their purpose well, with the exception of subtitles for title cards at the beginning and end of most of the episodes - while these subtitles are present, they're ill-timed in a way that means if you're skipping the opening or ending credits on your Blu-ray player they won't actually show up on-screen. A minor quibble, but a surprisingly annoying one when it happens time after time.

It's also worth noting that if you are without a Blu-ray player, then you'll miss out on the Sword Art Offline II shorts that are only present on the Blu-ray discs in this release - we imagine there simply wasn't enough space on a single DVD for them, and you aren't exactly missing much anyway mind you as these extras are rather dull fluff pieces for the most part.

On the other side of the fence, Sword Art Online II's English dub is really pretty good - Sinon's voice actress perhaps tries a little too hard to sound cool and detached but works well enough, Bryce Papenbrook sounds like he's having a whale of time voicing Kirito, and the rest of the cast also put themselves across well. If the English audio option is your flavour of choice, you won't be disappointed here.

At the time of writing this, we haven't been able to look at Anime Limited's Collector's Edition in full, so we can't comment on its additional physical content or value for money. Some fans will certainly be frustrated at seeing the series locked into a four-volume release as per the first season on the licensor's insistence, but at least the addition of collector's packaging to house the entire series and an additional book makes this feel more justifiable than the bare-bones editions we saw for that first series. We'll update and adjust our thoughts here once we've gotten our hands on a final retail copy of the release though.

It isn't as deep and thought-provoking a story as you sometimes suspect it might be, and it's certainly no Log Horizon in that regard, but when push comes to shove these early episodes of Sword Art Online II are decidedly entertaining throughout. The split of this story arc's episodes means that we're left with lots of build-up but no pay-off from this particular volume, but when the build-up is so enjoyable to watch it's hard to feel too hard done by about it, and it certainly ensures that we're eager to see how things play out in part two.

Sword Art Online is back, and what's more it's back to doing what it does best - building and exploring a virtual world and the threat inherent within it. That in itself is a cause for celebration, brushing away the issues of the Fairy Dance arc to return to the franchise's roots and deliver the opening salvos of this story in an enjoyable fashion. Now we just have to wait and see whether it can continue in this vein...

The Collector's Edition release also provides a box to house the entire series within and an additional 52 page book.

7
This first volume is primarily focused on world and character-building, but is an enjoyable opening to the series nonetheless.
COMMENT AND DISCUSS
blog comments powered by Disqus