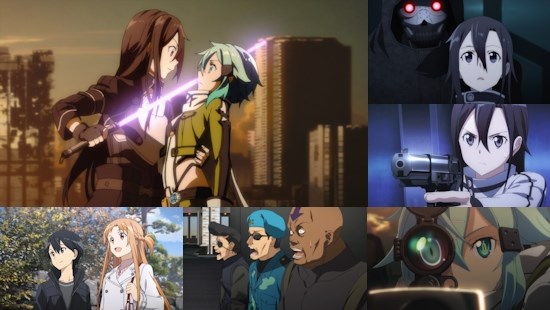 He's defeated Sword Art Online, and saved his girlfriend Asuna from the clutches of a madman in ALfheim Online - what new adventures await virtual reality hero Kazuto Kirigaya as the summer brings a second season of Sword Art Online to our screens?

For his part, Kazuto really has no intention on partaking in any such risky endeavours, preferring to enjoy his freedom and time in the real world as both his and Asuna's attention turns towards the future. However, it seems that others involved with our protagonist have different ideas - more specifically, a government agency is keen to ply Kazuto's knowledge and skills gleaned from his time in Sword Art Online to investigate a new and sinister mystery.

The core of this mystery is an individual known online only as Death Gun (a stupid name, we know, but if you've ever played an online first-person shooter it isn't entirely unbelievable), a player in another virtual reality game known as Gun Gale Online. Rather than a fantasy setting, GGO is set in a gritty world of guns and, well, more guns. Although this isn't exactly home turf for "Kirito" to use the name of his online alter-ego, he's tasked with entering Gun Gale Online to investigate Death Gun in the midst of seemingly impossible rumours - that being the suggestion that Death Gun is somehow killing real life players via this virtual world somehow, after threats he had made against several players led to their deaths in mysterious and inexplicable circumstances.

It isn't Kirito who is our guide to Gun Gale Online however, as we're introduced to this game and its virtual world via an all-new character in the form of Sinon, a girl who is an ace sniper within the game itself despite having a dark side to her past which is directly at odds with her love of this gun-slinging virtual reality. Needless to say, she also finds herself bumping into Kirito once he enters the game, and an occasionally fractious relationship between the two grows and builds as they both enter the Ballet of Bullets, Gun Gale Online's biggest tournament (and an obvious place for Death Gun to select his targets, of course).

In comparison to the quick, clean setup of Sword Art Online's first series (or at least the first half of that series), Sword Art Online II is undeniably clunky when it comes to presenting its story. It has a lot of manoeuvring to do and lots of story to fill in before it can even begin to think about dropping us into Gun Gale Online to get to the meat of its tale, which isn't the fault of the show itself as much as a necessity given its nature, but that lack of immediacy does hurt it (and indeed it's exactly the reason why we've waited for six rather than three episodes before penning our initial thoughts). Then again, it's this anime adaptation's attempt to mitigate this slow-burning start that proves to be its highlight thus far, focusing upon Sinon as she plies her trade in the midst of a tricky mission in GGO's midst - above all else, it's this taste of the virtual world being used here that leaves us thirsting for more, as the execution of its action in particular is occasionally sublimely and certainly decidedly entertaining.

A lot of the reason for this clunkiness beyond the sheer amount of work the series has to do early on is more inherent to Sword Art Online as a whole - Kazuto continues to be little more than an example of abject self-insert wish fulfilment that has every girl throwing themselves at his feet and every male character wishing that they were him, which starts to feel a little daft when you actually sit down and start paying attention to what he says and does, which is often either insipid or stupid (or both). This is perhaps exemplified by a moment in episode one where Kazuto is discussing how Death Gun could possibly kill someone in reality via an online game, and we switch to him imagining a bullet coming from an Ethernet port and somehow homing in on its target - the whole thing is supposed to be a visual metaphor, but instead feels like exactly like the kind of idiotic thing that would spawn from the protagonist's brain, thus making what should be a serious moment otherwise hilarious.

Luckily, once he enters Gun Gale Online there are plenty of moments where Kirito keeps his mouth shut and let actions speak louder than words, and these are the moments that bring back some of that Sword Art Online magic - the show's action is still excellently realised (provided you're willing to give it some wiggle room as far as some holes in its logic are concerned) and great to watch without fail. In many ways, Kirito's failings as a protagonist make Sinon seem all the more interesting - her past is a little forced but gives some interesting flavour to her character, and her online persona is an enjoyably straightforward foil to Kirito's awkwardness.

While not flawless, Sword Art Online II boasts the same kind of top-notch animation quality as its predecessor - Gun Gale Online may not be as colourful as Aincrad, but it's still visually appealing in its own way, and even outside of its stand-out action scenes this feels like a quality production with a voice cast to match.

By the end of episode six, it seems as if the die is cast for where the series is headed, and there are certainly enough interesting facets to leave us with high hopes that the show can put its awkward early forays behind it and stride forward with purpose from now on with its characters and their motivations well-defined. That isn't enough for us to boost the score of the episodes under consideration, which are largely pretty good but not great, but if you're a fan of Sword Art Online's first series then there's more than enough promise to persuade you to keep watching. For those who didn't like the first season for whatever reason however, you'll find nothing sufficiently different here to change your mind.

You can currently watch Sword Art Online II in streaming form on Crunchyroll.

6
We're all set for more of what made the first series so enjoyable, but that doesn't hide the clunky and long-winded introduction to this season and its virtual world.
LATEST REVIEWS
Girls' Last Tour