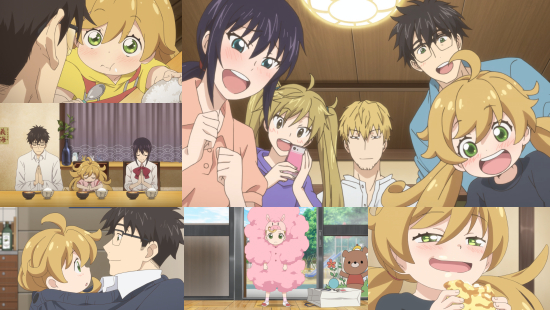 The concept of association is a well-known one in the field of psychology - the human brain loves to find patterns and ascribe one unrelated thing to another, and that often leads to our memories containing plenty of rather odd associations. For example, we may associate a certain smell or sound with a particular happy (or unpleasant event), and similarly food often becomes the heart of such associations. Thinking back to my childhood in particular, I can remember some early family holidays largely through the lens of what I ate at a given location rather than the places I visited!

This specific kind of association is one of the key tenets to Sweetness & Lightning, TMS Entertainment's adaptation of the on-going food-centric anime series. The show follows the sometimes tough travails of single father and teacher Kouhei Inuzuka, who works hard after the death of his wife to properly raise their daughter Tsumugi. While Kouhei does his best to ensure Tsumugi gets all the love, nurture and education that she needs, her life is deficient in one major way - a lack of good food. Pressed for time, Tsumugi's diet is one of quick, simple meals and food in front of the TV instead of around a table, a far cry from the more thorough efforts of her mother prior to her passing.

However, as luck might have it things are about to change for Tsumugi thanks to one of her father's pupils - Kotori Iida is a quiet girl with a love of food, doubtless brought about by her mother running a restaurant when she isn't dashing around TV stations as a celebrity chef. When the desire to find some good food for Tsumugi leads Kouhei to this very restaurant only to find its proprietor absent and only Kotori home, so begins an unlikely relationship which sees pupil serving as teacher to lead Kouhei - and Tsumugi - forth on a journey of culinary discovery.

Once this setup is established, we soon get into the groove of the show's formula - we're served a snipper of Kouhei and Tsumugi's life which usually brings about some kind of turmoil or difficulty that needs to be overcome by father and daughter, food enters the equation at some point in and around said kitchen sink drama, and then the mainstay of the cast convene to get cooking and make everything better with the incredible restorative power of food. While this setup can start to feel repetitive episode after episode, it does broadly work - each self-contained "segment" of the show has an appeal of its own, and there's something reassuring in how you know that everything is going to end up okay for the cast come dinnertime. If only real life was that convenient?

It should be noted however that sometimes Sweetness & Lightning does something outside of the ordinary in terms of the expectations its set for itself, and it's these glimpses deeper into the feelings of certain characters that prove to be the true highlights of the show as they bring some wonderfully realised moments of self-reflection to the cast. Episode one sets us off on a strong footing in this regard as a mix of Kouhei's lament for his lost wife, his guilt at the aspect of his daughter's growth that he's overlooked and his happiness at discovering and rectifying this missing aspect of the father-daughter relationship makes for a heady and emotional moment that is tear-jerkingly beautiful. Later in the series, Tsumugi's realisation that she'll never see her mum - or taste her cooking - again is devastating but perfectly weighted in tone and timing to produce one of the year's most powerful moments that has me tearing up just writing about it.

These striking scenes sit in the midst of a series that is more broadly just pleasantly enjoyable. All of the cast of the show are a lovable lot in spite of their foibles, and Tsumugi in particular is pitched perfectly as a decent kid who is still liable to act up with childish tantrums if things don't go her way, while also having difficulties at school with others that are well-realised versions of the kind of troubles you'd expect for a child her age. The only real fly in the ointment here is the relationship between Kouhei and Tsumugi - this decidedly odd teacher-student relationship is the elephant in the room that's never spoken of, leaving it to exist as a clunky setup that feels like it doesn't even need to be there.

The one area of the series I feel like I can't particularly speak to is its culinary element. As someone without an overwhelming interest in food or the nuances thereof I'm not sure exactly how interesting this aspect of the series is, but it seems to stick to simple, realistic recipes rather than outlandish concoctions - a perfect complement to the rest of the series, and there's enough going on in the periphery of any food preparation scenes that you won't be bored even if you aren't desperately trying to pick up some cooking tips.

Visually, Sweetness & Lightning is cute and colourful (especially in the case of Tsumugi, who is exactly as adorable as an anime kid should be), which allows it to negate the fact that its animation as a whole is mostly just passable - what it lacks in detail or style it makes up for with character, which (food aside) is the really important part of its equation anyhow. Coupled with this aesthetic that broadly gets more right than it does wrong, the show's voice cast do their part admirably in selling the show - again, Tsumugi gets top billing on account of some fantastic work from 10 year-old Rina Endou, but Kouhei also gets a great turn as a tired and sometimes exasperated dad from Yuichi Nakamura. Throw in a jaunty and pleasant soundtrack, and there's nothing here that will actively turn you away.

Taken as a whole, I found myself really enjoying Sweetness & Lightning - yes, it can be formulaic, but it has a charming cast and utilises them well, which makes its occasional poignant moments have a real impact that lifts the series as a whole over and above any sense of mediocrity. It would be easy to make comparisons to the anime adaptation of Bunny Drop here, but I'm not sure that's a fair comparison - this is a very different story with very different aims, although I would argue that Sweetness & Lightning has a better handle on the warts and all depiction of a young child without turning them into an unbearable terror.

Who knows what taste of foodstuff I'll associate Sweetness & Lightning with in my brain, but I suspect it'll be something more pleasant - and less divisive - than Marmite, that's for sure...

You can currently watch Sweetness & Lightning in streaming form on Crunchyroll.

7
It can get bogged down its formula, but this is a series that is as sweet and light as its title suggests, with just the right sprinkling of emotional spice to flavour it.
COMMENT AND DISCUSS
blog comments powered by Disqus