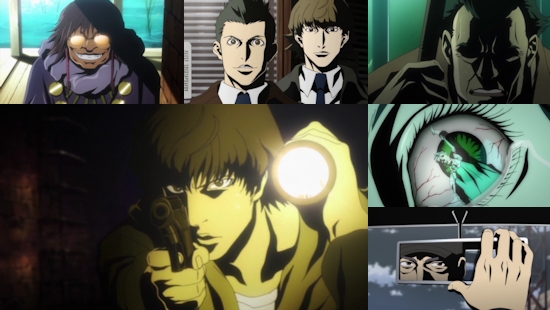 Let's be up-front and frank about this - most efforts from Japanese animation studios which present their own take on popular western properties have ranged from the mediocre to the monumentally awful. Spearheading the almost systematic ruination of numerous Marvel comic book properties in recent years have been Madhouse, who managed to massacre Iron Man (yes, Iron Man of all things!) and Blade and make Wolverine and the X-Men seem less interesting than a certain light music club.

With this history in mind, it's with a certain amount of trepidation that I approached Madhouse's take on the successful US TV franchise Supernatural - trepidation only furthered by the knowledge that at twenty-two episodes in length it runs the risk of being the longest train wreck in history. Thankfully then, I can front-load my thoughts on the series by saying that Supernatural: The Anime Series defies my expectation by being a decent, entertaining series for the most part, even for someone like myself who has never watched the original TV series.

For those like myself who aren't familiar with Supernatural, the base story of the show is simple - two brothers, Dean and Sam Winchester, travel across the country in a Chevy Impala investigating unusual goings-on and tracking down and exterminating demons and other creations of supernatural offerings, all while trying to track down their errant father. Initially, this means that we're served up plenty of pretty decent monster of the week fare, which morphs into broader narrative arcs and plot points surrounding the brother's father and the fate of their mother as the series goes on and recurring foes are introduced into proceedings.

For anyone who is an existing Supernatural fan, the layout of the series might seem a little curious - stories from seasons one and two of the TV show are mixed up, intermingled and occasionally toyed with, before being supplemented with some anime original episodes to tie things together and, more often, explore characters and aspects of the story that the original series never has an opportunity to. Thankfully, this material still sits well within the series as a whole for newcomers, and although the anime original content broadly makes up some of the less interesting stories within the series as a whole most of it remains acceptable enough.

Across the three DVDs that make up this release, fans are also treated to brief introductions fronted by the actors who play Dean and Sam in the original TV series - this is rather a curiosity for newcomers, as it blithely spoils aspects of the episode to come in the assumption that you've already seen the original show, and is arguably best skipped if you want to avoid aspects of an episode's plot being given away.

Visually, Supernatural proves itself to be accomplished rather than exceptional; its animation is good enough at fitting in with the tone of the show and serves its purpose well without ever particularly catching the eye, with a DVD transfer that is acceptable enough in spite of the lack of a Blu-Ray release here in Europe.

With the only Japanese audio option involving watching with English hard of hearing subtitles (which reports sound effects in text form within its subtitles and proves to get irritating fast with the lack of a "proper" English subtitle track), you're best served watching Supernatural with its English dub - thankfully said dub is actually really good, provided you can look past some decidedly flaky lip flap matching and the inevitable odd cheesy line. The final two episodes are also a little odd to watch as these are the only instalments where Dean's original voice actor Jensen Ackles voices the character, making for an unsettling shift in the character's voice so late in the series.

Taken as a whole, Supernatural: The Anime Series is a consistently entertaining series - not every episode will blow your mind or hook you in entirely, but there's always enough going on and by the time the show threatens to become predictable in its latter stages you're engaged enough to be able to shrug it off. After watching so many shows that are entirely of Japanese origin, Supernatural also feels surprisingly fresh in its outlook, so if you're after a refreshing change from the norm then there's something to be said for the story delivered here as well.

Thus, this isn't a series that will take the world by storm and persuade countless people to dip their toe into the deep waters of Japanese animation, but as something a little different that actually makes good use of a western franchise in animated form, Supernatural: The Anime Series is at least worthy of your consideration.

7
A surprisingly solid and entertaining take on the live-action TV series, Supernatural proves that not every anime adaptation of a western property has to be an abject disaster.
COMMENT AND DISCUSS
blog comments powered by Disqus