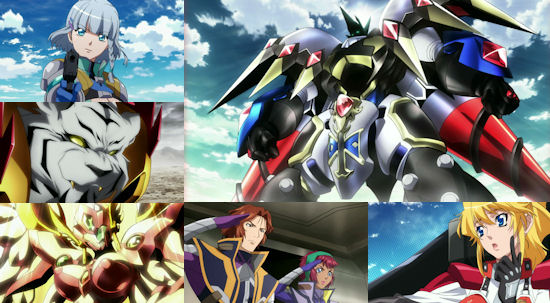 If you've found yourself bemoaning the lack of new mecha anime coming our way in recent times, then simply the title of this new autumn season offering from Crunchyroll will prick up your ears.  Certainly, it offers us plenty to hope for: Super robots, war and.... well, an inspector I suppose.  Although this isn't the first Super Robot Wars Original Generation anime (it's the third in fact), it is the first title to make its way to the UK, while the content of The Inspector is also a retelling of the story from the second Original Generation Game Boy Advance game released by Atlus in North America.

This means that those of us entirely new to the Super Robot Wars (or Super Robot Taisen as the games were known outside of Japan) run the risk of being baffled by a plot which throws us straight into a world disrupted by conflict between the Earth Federation and the remaining rebellious DC forces who were largely defeated in the first series while also setting up the prospect of alien intervention coming from anywhere at any time.  Thankfully, most of this information trickles through in these opening episodes but more importantly a lot of it seems to be entirely unimportant, particularly in The Inspector's opening episode, which is plastered almost end to end with giant robots fighting with explosions and action aplenty - pretty much the entire reason you're tuning in to this show, most likely.

From this high octane opening, the series properly introduces what proves to be an ever-growing roster of characters and machines for them to pilot, blending it in with a little political intrigue and the usual kind of personality clashes you'd expect from this kind of series, all the way up to setting former friends against one another as they find themselves on opposing sides of the lines which divide humanity.  Throw in some mysterious characters who clearly have intentions other than those they publicly reveal, and you have yourself a decent little mecha anime melting pot.

Although Super Robot Wars OG: The Inspector is never likely to rival the likes of Code Geass or Gundam in terms of story, characters or mecha designs, these episodes still offer up a pretty decent slice of giant robot action - there's nothing ground-breaking or particularly original about it, but that barely matters when each episode manages to string its variety of basic pleasures together in an entertaining fashion with enough room for major plot progression to suggest that it shouldn't run out of steam before the series is over.  The only real shortcoming of the series thus far is that none of its characters really leap out at you in terms of their personalities; it's all pretty generic stuff (unless breast size and how frequently those breasts bounce count, in which case you're well served here as the show's ending credits endeavour to remind you), which threatens to leave a lot of the action without emotion or passion at all.

So, what we have here is a series that doesn't look likely to win any awards (be it for its animation or plot), but it is one that succeeds in filling a hole - if you're on the look out for a new giant robot anime that doesn't require too much thought or concentration, then The Inspector can be enjoyed and dipped in and out of simply enough, with some cool mecha designs to coo over in the process.  This is arguably the kind of series that Crunchyroll was made for - an enjoyable piece of throwaway entertainment to while away these cold, dark autumn nights.

7
It doesn't break any new ground, but there's enough on offer for us to forgive this series as the popcorn anime show that it is.
COMMENT AND DISCUSS
blog comments powered by Disqus