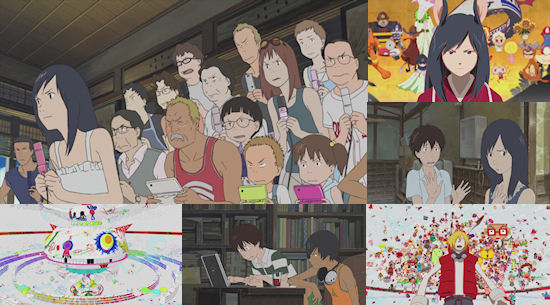 In the sprawling, inter-connecting online world we now take for granted, it would be easy to imagine the chaos caused if the planet's Internet connectivity suddenly took a global tumble for whatever reason.  Now ramp up that online world to its natural conclusion, one where every facet of every-day life from basic communications through to emergency services are all controlled via a single connected network, and inject an AI capable of destroying the whole shooting match into that network.  If you've managed to conjure up such a concept in your head, then you've pretty much just imagined the online world of OZ, the peril it faces and one of the key tenets of Summer Wars; Mamoru Hosoda's latest movie (and very much his brainchild) which is now winging its way to the UK on both DVD and Blu-Ray - the latter of which we're using as our basis for this review, incidentally.

OZ is, ostensibly, Facebook on steroids - a visually sumptuous social network that has become the key means of communications, doing business and generally going about your life around the world.  This seems of little more than passing interest as the film begins and the most popular girl in school Natsuki Shinohara appears looking for a volunteer for some unspecified summer work - despite other commitments (namely as a part-time administrator of OZ's systems), math genius Kenji Koiso offers up his time in the name of spending some time with Natsuki, finding himself whisked off to the vast home of her extended family to celebrate her great-grandmother's ninetieth birthday.

Needless to say, Natsuki hasn't dragged Kenji along simply to grant him a free holiday, and as the entire Jinnouchi clan gather so she drops her bombshell on him regarding his role in this family gathering - a role which only becomes markedly more awkward when Kenji spends an entire night solving a maths problem e-mailed to his phone at random only to later discover that he's just set himself up as the prime suspect for the hacking and defacing of OZ itself.

With Kenji's account hacked and OZ in an increasingly dangerous downward spiral of chaos, nobody seems sure what to do to resolve the issue - cue a display of soft power from the Jinnouchi family's elderly head, and some more immediate action from within OZ itself via an online gaming champion with a surprising real-world identity.  As the movie progresses, so online and family matters compete, converge and coincide in a mix of human emotion and drama with goings-on which threaten the safety of the entire planet as well as the Jinnouchi family themselves.

If that rather sprawling synopsis isn't enough of a clue, Summer Wars is a busy film that has a lot that it wants to cover within its ambitious plot.  This certainly shouldn't be interpreted as criticism, as Summer Wars manages to juggle all of these various story-telling balls with aplomb as it keeps events moving at a regular and decent pace while never losing sight of its goals or the ultimate points it wants to make about the nature of communications, family and what links humanity together.

This ability to handle so many plot threads is probably best addressed by its roster of characters - the Jinnouchi family is suitably large, but this isn't simply for decoration.  Instead, each and every individual is suitably well-rounded and fleshed out to offer a unique perspective on events across several generations, which gives a broad perspective on the matters at hand without having to rely on other plot devices while also ensuring that all of its characters are easily recognised and, for the most part, likeable.

Visually, Summer Wars is perhaps inevitably at its most striking during its depictions of the inner workings of OZ - a white, sterilised backdrop fronted by a riot of colour and imagination as OZ goes about its business before becoming twisted and graffiti-ridden by its unwelcome artificial guest.  OZ also provides most of the action set-pieces of the film, which are stunning to watch when set against that detailed and imaginative backdrop.  Perhaps the only down-side to that visual splendour is that it makes scenes set in the film's real-world seem a little mundane, but that shouldn't detract from the fluid movement and character animation afforded these segments which, ultimately, make up the mainstay of the movie.  Thankfully, Manga Entertainment's Blu-Ray release offers the film a pixel-perfect, near-flawless treatment complete with impressive audio tracks and a half-decent English dub to boot.

Ultimately, Summer Wars true aim is to entertain above all else, and it achieves this in spades - it knows when to deploy humour without ever going overboard, when to hit the viewer hard with emotion and when to offer up some action, excitement or tension.  All of this is layered over a fascinating story (which fails only on account of its implausibility you could argue) and great characters that bring this rich, multi-faceted story to life effortlessly.

The true genius of this film is how it manages to defy its own potential limitations - it's a complex movie that is somehow still simple to comprehend, and its story is heavily reliant on technology yet homes in on what is ultimately an almost old-fashioned and heart-felt view of life.  It's this ability to effortlessly weave something that perhaps shouldn't work on paper into such an enjoyable film that really marks Summer Wars out as a much-watch movie; and don't be fooled into thinking otherwise, you really should go out of your way to watch it at least once.

9
Summer Wars creates a rich and fascinating world and populates it with equally interesting characters to create a fabulous viewing experience that simply shouldn't be missed.
COMMENT AND DISCUSS
blog comments powered by Disqus