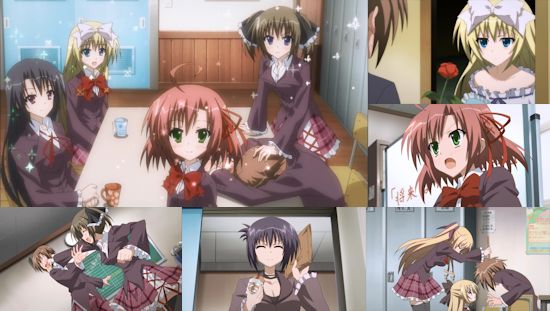 The anime industry sure does love its sequels - while it's a no-brainer to give a successful franchise as many episodes as possible to maximise both its revenue and popularity, some of the shows we've seen receive multiple series seem like less obvious choices. Certainly, one comedy anime series that I wouldn't have pinned for a follow-up is Seitokai no Ichizon, aka Student Council's Discretion, yet here it is with a fresh coat of paint and even a slightly altered voice cast to have another crack at the hit-and-miss world of anime comedy.

Despite switching studio, changing character designs and those aforementioned differences in the main voice acting line-up, this new outing for Student Council's Discretion is still very much a sequel - it frequently references characters and situations from the original series which won't make much sense to a newcomer out of context. Indeed, newcomers are thrown to the wolves entirely by Anime on Demand's streaming of the series, which omits the "episode zero" instalment which kicks the series off by introducing protagonist Ken Sugisaki and takes us through his path to becoming a student council member, and instead jumps straight into episode one proper. It's a discombobulating experience, particularly when other services have included the episode zero broadcast in their streams, and even more so when episode one begins by making literal references to "last episode".

If you haven't guessed by that previous statement, Student Council's Discretion is the kind of comedy that revels in being self-referential - the missing episode zero ends with a discussion of what the second season should be called, and the entire first instalment proper sees the group of characters that make up the student council discussing how they should change things to attract more viewers.

While not everything about the series is quite this inwardly-facing, it's arguably the best material of these early episodes by quite some distance - watching a character lose their memories, and then regain them by reading through all of the light novels upon which the series is based is an example of one of the more delicious strokes of self-aware genius on show thus far. Even away from this meta-humour, there are some wonderful throw-away one liners and comments that brighten up any given episode for those brief moments when they sink in and make you giggle.

The caveat to all of this positivity comes with a suffix that reads "if only it managed to do all of this more often" - there simply aren't as many laughs per episode as there should be and this is largely down to the structure of the series, which insists upon focusing on a single "topic" in each episode. Although these topics are relatively broad and offer plenty of room for manoeuvre, they still aren't substantial enough to carry an entire twenty minute episode on their own and thus instalments often become a drag as some initially snappy ideas and setups get flogged like the contents of a Findus lasagne.

Beyond its pure content, you can certainly see that the change of animation studio has worked some magic for this series - AIC's character designs are sharper and the overall animation quality more pleasing, which aids the series in taking its humour in more directions without the constraints that seemed to hamper Studio Deen's take on the show in the past. The new members of the voice cast also seem to work well enough, although then again I don't remember enough about the performances within the first series to make any particularly direct comparisons.

If you're a fan of anime comedies that poke fun at themselves and the otaku bubble in which they reside, then Student Council's Discretion certainly has your number and provides a reasonable amount of enjoyable material to potentially make for a worthwhile watch. Unfortunately, by the same note the real comedy gems that come from that line of comedy are too few and far between for my liking, and unfortunately much of what we're treated to in the gap between its best moments is too dull or long-winded to be enjoyable. In other words, this is a series for the more patient anime fans amongst us - the kind of show best served as a highlights reel with its substantial rolls of fat shorn from it.

6
A comedy series with some real gems of meta-humour, padded out with too much dull material to be particularly memorable - a situation not helped by the assumption that viewers have seen the first series.
COMMENT AND DISCUSS
blog comments powered by Disqus