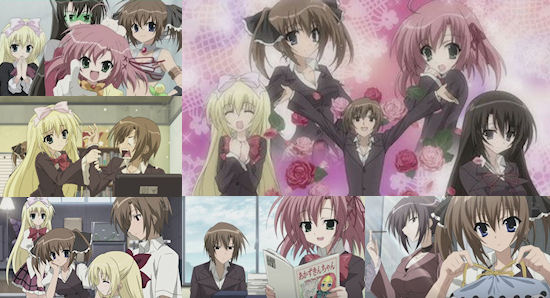 The harem show which sees a single male character surrounded by pretty girls willing to fling themselves at his feet at the slightest provocation is a staple part of the anime diet... and how Ken Sugisaki of Student Council's Discretion (aka Seitokai no Ichizon in Japanese) wishes that he could claim such a position.

At first glance, Sugisaki is incredibly close to fulfilling just such a role, finding himself as the sole male member of a student council otherwise made up entirely of girls - four of them in this case, picked by the school's students on account of their popularity while Ken's place was achieved at the highest scorer in recent exams.  While his friendship with these girls cannot be doubted, it's safe to say that any romantic encounters are a remote possibility - not that it stops Sugisaki from trying his luck whenever possible.

While that wraps up the basic premise of Student Council's Discretion in a nutshell, this wannabe harem angle to the series is really only a small percentage of the show's content as a whole - instead, it makes use of its "five people in a school council meeting room" premise to bandy about lots of dialogue, gags, parodies and anime references at an occasionally blistering speed.  The first episode alone bounces along from jokes at the expense of Dragonball Evolution to nods in the direction of Lucky Star and The Melancholy of Haruhi Suzumiya, and you can always rely on each episode to deliver at least a few doses of heavily otaku-centric humour.

As is so often the case with such heavily referential shows, the comedy on show here is decidedly hit and miss.  The opening episode to the series demonstrates what it can do at its best with its quick-fire one-liners and references, but sadly the rest of the series struggles to live up to this blistering opening in terms of either its pace or humour.  This isn't helped by attempts by the series to bring some drama and emotion into proceedings, which feels as forced as it does out of place with the rest of the show's tone and teeters on the brink of becoming irritating in places.

From a "glass half-full" perspective on the other hand, there are some hilarious moments that can be cherry picked from the midst of the bulk of mediocrity demonstrated by Student Council's Discretion - aside from its fast-paced opener, episode eight's introduction of an additional character for a spell brings forth plenty of laugh out loud gags while other instalments manage to derive humour from the extent of council member Mafuyu's gaming obsession and some sharp jabs in the direction of a few particularly well-worn anime tropes.

In essence, how much you enjoy Student Council's Discretion will depend on two things.  Firstly, a decent knowledge of recent anime is really quite important if you're hoping to get and fully comprehend all of the jokes thanks to its tendency to poke fun at newer shows such as K-ON and Toradora as well as older, more widely-known shows to UK viewers.  Secondly, and perhaps even more importantly, the pleasure you derive from this series is dependant on how much mediocre material you're willing to sit through to get to "the good bits".  There's a lot of tedious, unfunny stuff on show throughout the series, but if you can ignore or put up with that then there are also some diamonds hidden within the rough a hefty chunk of the show consists of.

Ultimately, if you love your anime meta-humour then Student Council's Discretion is worth at least a cursory glimpse - if nothing else, check out episodes one and eight to see if it tickles your funny bone, and if so then the rest of the series might be worth your time.  It's certainly no classic, but when it does hit the mark it can be terrifically funny -if only it managed to hit that comedic bull's-eye with more regularity to lift it into the higher echelons of its genre.

6
A couple of top-notch episodes and some funny segments add a little interest to what is otherwise an uninspired and often tepid comedy series.
COMMENT AND DISCUSS
blog comments powered by Disqus