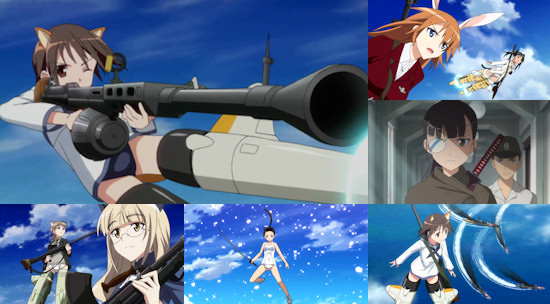 Imagine a world where the late 1930s and late 1940s were shattered not by a World War, but by a war against an alien race Hell-bent on destroying the planet.  Imagine that in that world, the only way to defeat the aliens is with the use of witches and their magical powers.  Imagine that these witches staunchly refuse to wear skirts or trousers, and imagine that when they use their magic they grow animal ears and tails.  If you've managed to imagine that world, then congratulations!  You're officially certifiable.  Either that or you're familiar with the original series of Strike Witches.

While it's yet to reach our shores on DVD here in the UK, the second series of the Strike Witches franchise (now in the hands of AIC after Gonzo handled the first season) is now streaming to us lucky Brits via Crunchyroll, giving us a chance to enjoy this rather bizarre concept to its fullest extent.  While the Neuroi threat is bigger and badder this time complete with larger, more powerful enemies, little else has changed in the six months which separate the two series in this alternate universe's timeline - Protagonist Yoshika Miyafuji has just graduated from middle school and her control over her magical powers has increased significantly, and the first couple of episodes of this second season are largely focused on reintroducing her first to Major Mio Sakamoto and then the rest of the 501st Joint Fighter Wing and its various characters.

Not that this is a slow or laborious reintroduction by any means as, set against the new Neuroi threat, it also has plenty of excuses to blend meeting the characters in with outright action, which is achieved in a slick and stylish fashion that often surpasses any similar scenes offered up by the original series.  Of course, most of these action scenes are also augmented by a hefty dose of fan service courtesy of plenty of crotch shots of our trouser-less heroines which is likely to be off-putting to some, but there's no ignoring the decent production values of the series so far aside from that obvious pandering to the fans.

That fan service also filters into the third episode of the series, with the rather blatant overuse of sexual innuendo involving the use of brooms as some of the Witches find themselves in need of extra training - again, this is going to be enough for some viewers to click the "close" button and never return to the series, but if you can get beyond that then you find that, underneath it all, Strike Witches 2 is a surprisingly innocent series.  Despite its setting of a world in the throes of an alien invasion, the show thus far exudes a cheerful confidence in the spirit of friendship triumphing over all which makes for a pretty uplifting viewing experience that just about manages to balance its quota of action against the relationships between characters and the odd bout of slapstick humour.

Despite its cynical attempts to tick off every popular feature in the otaku handbook from animal ears onwards, Strike Witches 2 so far has somehow managed to prove itself to be more than the sum of its parts.  If fan service is your thing then it's pretty much unrivalled amongst its current brethren (particularly in the UK where we rarely see such series), but even aside from the lack of lower body clothing there's a sense of fun and light-hearted entertainment that pervades it throughout.  Top that off with some decent production values and you have a series that won't be for everyone, but if you dare to delve into it then it's an enjoyable world to dip your toe into even if you aren't familiar with the original series of this anime.

7
If the fan service and ridiculous premise don't send you running for the hills, there's a lot of fun to be derived from Strike Witches 2 so far.
COMMENT AND DISCUSS
blog comments powered by Disqus