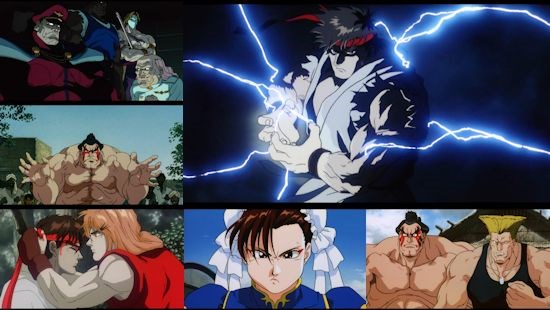 Even if you aren't a gamer, you'd be hard-pressed not to have some familiarity with the Street Fighter franchise, such is its place in modern popular culture. Although it may not be quite the powerhouse that it once was in terms of its wider popularity, the golden age of Street Fighter for most anime fans will undoubtedly be 1994's Street Fighter II: The Movie, which brought all of the game's characters to the big screen courtesy of the now-defunct Studio TAC. Given that it was originally produced on film, this movie is a perfect target for a High Definition Blu-Ray release, which is exactly what we get here thanks to Kazé giving it just such a treatment.

I could spend some time discussing and poring over the nuances of the film's plot, but... well, this is an anime based around a fighting game, so any real sense of depth to such plot is decidedly wafer thin. All you really need to know is that M. Bison (or Vega, if you're watching the Japanese language option) is the mastermind of an evil plot to lure fighters into his organisation known as Shadowlaw, who are responsible for all sorts of terrorist shenanigans which have come to the attention of Interpol.

Headed up by Chun-Li, the race is on to shut down whatever Bison is planning - a race which involves tracking down the elusive Ryu as he wanders the Earth seemingly aimlessly, unaware that he's come to the attention of Bison on account of his fighting prowess.

In all honesty, none of this stuff actually matters, as it's simply a framework within which to cram as many set pieces between the various fighters so beloved within the series as possible. In keeping with the original Street Fighter II game, the action flits all over the planet to take in a variety of locations, matching up characters in order to bring about brief bouts of fighting action in as close a fashion to the game as possible all the way through to the showdown with M. Bison and his henchmen.

How well this setup works is dependant largely upon the quality of each scene - it soon becomes obvious that the film is trying to shoehorn its characters and locations into the flimsy plot, so provided you're willing to embrace that there is a fair amount of fun to be had from watching the ensuing skirmishes. Some of these fights are exquisitely realised and worth watching over and over again - Chun-Li's indoor fight with Vega is the obvious highlight (and no, not just because of the fan service, which is uncensored here incidentally), but there are plenty of other nicely animated scraps and violent outbreaks here to justify the price of entry. The overall animation quality is pretty variable, with some decidedly odd facial expressions cropping up here and there, but more often than not it's at least acceptable, and occasionally rather impressive.

Naturally, this brings us to the film's HD treatment, which looks absolutely superb - it's clean, colourful and is far and away the best-looking release of the film you'll be able to find without question. Backing up the on-screen action we come to the film's one curiosity - the presence of a "censored" English audio track, which differs from previous releases in that its expletives have been replaced with softer equivalents. As a newcomer to watching this film, this change actually isn't noticeable at all and meshes with the original Japanese audio and subtitles more closely, but if you're coming to the movie from a nostalgic perspective and the days where Manga Entertainment would introduce copious swearing to dubs to ensure it received a higher BBFC rating and thus more cachet amongst buyers at the time, then the change will undoubtedly disappoint you. Even with this change, the English dub and, more importantly, its accompanying soundtrack, remains far superior to the Japanese audio, marking one of those rare occasions where the English language option is the preferable way to enjoy the film.

Although calling Street Fighter II: The Movie a classic would be wildly over-egging the pudding, it does most certainly deserve a place as arguably the best fighting game to film adaptation out there. Of course, that still means that it's a fighting game adaptation when push comes to shove, so a weak plot and characterisation is effectively par for the course - if you have no interest in the Street Fighter universe, then this could make this film a hard sell, as without any grounding in the franchise it's just a bunch of muscular men and women posturing and hitting one another for the most part. Assuming you have at least some history with the Street Fighter universe however, there's a fun and largely great-looking nostalgia trip to be found here, and you could do plenty of worse things with an evening than watch this movie. Things like watch Tekken: Blood Vengeance, for example...

7
It's a shallow and occasionally stupid movie, but Street Fighter II has never looked so good and offers up a fun nostalgia trip for new fans and old.
LATEST REVIEWS
Girls' Last Tour